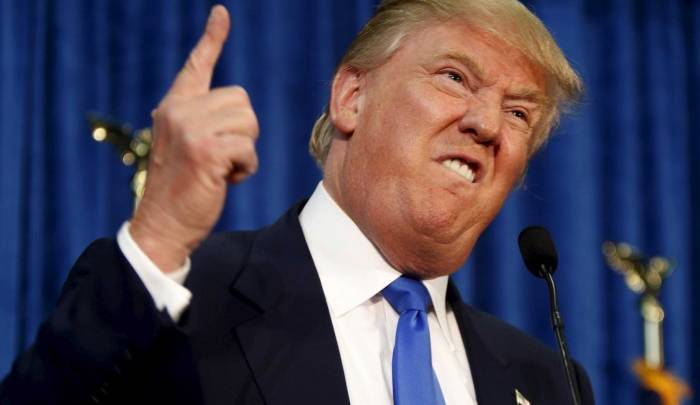 Doughy presidential candidate Donald Trump is known for speaking first and (sometimes) thinking later. That was again the case on Thursday when he ripped the U.S. Treasury Department’s decision to replace president Andrew Jackson on the $20 bill with anti-slavery icon Harriet Tubman during an interview on NBC’s Today. While the doughy frontrunner did acknowledge that Tubman was a “fantastic” person, he said we should put her face on another bill that no one ever uses such as the $2 bill.

“Andrew Jackson had a great history,” Trump said. “I think it’s very rough when you take somebody off the bill. Andrew Jackson had a history of tremendous success for the country… I don’t like seeing it. Yes, I think it’s pure political correctness. Been on the bill for many, many years and really represented—somebody that was really very important to this country. I would love to see another denomination, and that could take place. I think it would be more appropriate.”

While Jackson certainly was a major figure in American politics, his inclusion as the face of the $20 bill has long been controversial thanks to his Indian Removal Act that paved the way for the tragedy known as the Trail of Tears in which more than 10,000 Native Americans died while being forcibly removed from their ancestral lands.

Tubman, in contrast, was famous for her work in helping escaped slaves secure their freedom as a conductor of the Underground Railroad. She was also active in the fight for women’s suffrage decades later.

So you basically have a battle between an incredibly courageous person who fought their whole life to make America more equal against someone who has been condemned by history for supporting ethnic cleansing. If you’re shocked that Trump chose Andrew Jackson in this fight, you haven’t been paying attention.

But hey, I will give Trump credit for one thing: He shockingly didn’t ridicule Tubman’s appearance or refer to her as an “overrated bimbo.” Maybe he has a sensitive side after all?