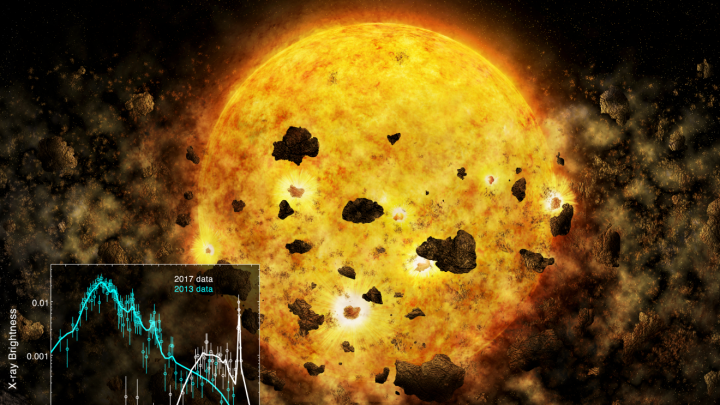 Planetary systems aren’t just born overnight. When stars form and begin pulling debris into their orbit, some of that material eventually clumps up into fledgling planets, and the gravity of those bodies pulls down more and more material which ultimately determines how large a would-be planet could be. But life isn’t easy for young planets, and astronomers know that stars and even some larger planets have a habit of decimating smaller worlds.

Now, for the first time ever, NASA may have caught a star in the act of eating a planet. Thanks to the powerful Chandra X-ray Observatory which was launched way back in 1999, scientists believe that they’ve determined why a long-studied star occasionally dims, and for longer and longer periods of time, and it sure is wild.

The star, called RW Aur A, is thought to be quite young, and its location just 450 light years from Earth has allowed astronomers to study it for many decades. What they’ve seen over the years has been pretty odd: RW Aur A dips in brightness every few decades, but those dips are increasingly dim and they last long and longer.

The Chandra X-ray Observatory has allowed researchers to study the dimming in greater detail than ever before. The latest data has given the scientists reason to believe that the dimming is caused by a growing cloud of debris circling the star, and that material is likely the remains of a young planet that the star is in the midst of destroying.

“Computer simulations have long predicted that planets can fall into a young star, but we have never before observed that,” Hans Moritz Guenther of MIT, and lead researcher on the study, explains. “If our interpretation of the data is correct, this would be the first time that we directly observe a young star devouring a planet or planets.”

The study suggests that the young planet likely collided with some other smaller body, and that the impact was enough to cause both the planet and the unknown object to fall into the star. That’s pretty metal.