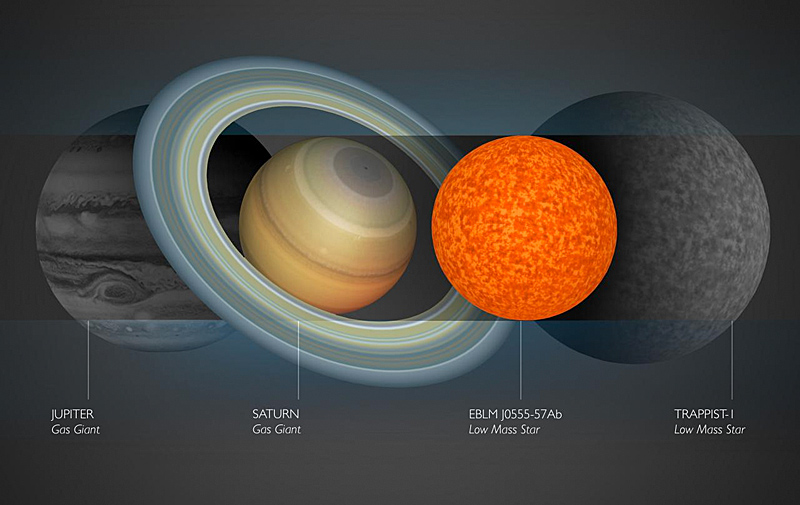 We typically think of stars as colossal balls of fusion-driven fire that absolutely dwarf everything else, but researchers just made a discovery that offers a slightly different perspective. A group of scientists from the University of Cambridge have detected a star that is so small, even one of our own planetary neighbors happens to be larger, and it’s assumed to be the absolute smallest a star can possibly be.

The star, which has been labeled EBLM J0555-57Ab, might not have a particularly interesting name, but it’s an extremely important discovery all the same. For comparison, the star is just slightly larger than Saturn, and the gas giant Jupiter is even larger than it.

In fact, the star is so small that it’s thought that the researchers believe it is as small as stars can possibly be while still having the ability to facilitate hydrogen fusion. If the star were any smaller, the pressure at its core likely wouldn’t be great enough to actually fuse hydrogen nuclei, making it a brown dwarf, which is often called a “failed star.”

But while the newly-discovered star is a lightweight, that’s actually good news when it comes to the search for life. “The smallest stars provide optimal conditions for the discovery of Earth-like planets, and for the remote exploration of their atmospheres,” Amaury Triaud of Cambridge’s Institute of Astronomy said. “However, before we can study planets, we absolutely need to understand their star; this is fundamental.”

The TRAPPIST-1 system, which researchers recently revealed as being filled with seven potentially Earth-like planets, has a low-mass star at its center. That star, which is only about 30% larger than EBLM J0555-57Ab, is a prime example of why smaller stars are where we should be searching if we hope to find exoplanets that are potentially habitable.