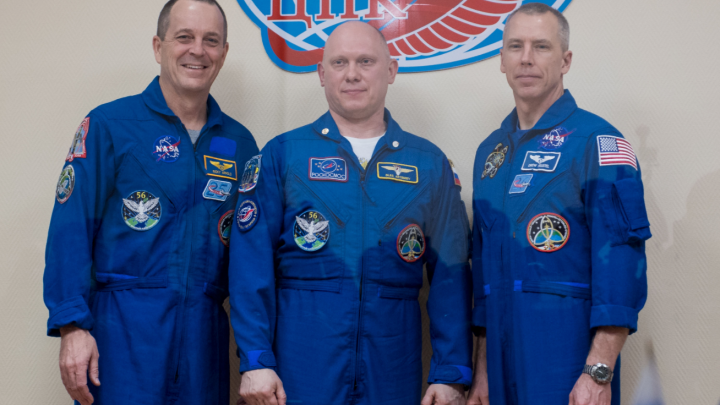 Expedition 55 of the International Space Station is finally underway after a trio of crew members reached the spacecraft and were welcomed by their fellow scientists. NASA astronauts Drew Feustel and Ricky Arnold, along with cosmonaut Oleg Artemyev, successfully boarded the space station after a roughly two-day trip from Earth. The crew launched from the Baikonur Cosmodrome, located in Kazakhstan and took the trip in a Russian-made Soyuz spacecraft which has become the default mode of transportation for ISS travelers.

The new members, which will spend over five months aboard the spacecraft, join NASA astronaut Scott Tingle, Roscosmos cosmonaut Anton Shkaplerov, and Norishige Kanai of Japan’s space agency, JAXA, as the full six-member team for Expedition 55.

The lengthy trip between Earth an the International Space Station has less to do with distance and more to do with the careful maneuvering required for the crew capsule to successfully dock with the orbiting laboratory.

Now that their journey is over, the scientists can get down to work, and there’s plenty of it to go around. According to NASA, the crew has roughly 250 experiments and investigations to conduct during their stay aboard the ISS. They’ll be dabbling in “biology, Earth science, human research, physical sciences and technology development,” NASA says.

“Highlights of upcoming investigations include: a new facility to test materials, coatings and components of other large experiments in the harsh environment of space,” NASA explains. “A study on the effects of microgravity on bone marrow and blood cells produced in bone marrow; and a newly-developed passive nutrient delivery system for the Veggie plant growth facility.”

Much of the work being performed on the International Space Station is forward-looking, and new discoveries can and will be applied to future space missions, including proposed journeys to Mars. More specifically, research into the effects of long-term stays in space will have a huge impact on how NASA and other space agencies around the world plan for manned missions to other planets.

Recently, NASA astronaut Scott Kelly and his twin brother, Mark, were the subject of the “Twins Experiment” which sought to determine how space can alter the genes of individuals during long trips. Despite some confusion on the topic, NASA revealed that the expression of Scott’s genes had indeed undergone a long-lasting change, which could be a vital area of research going forward.