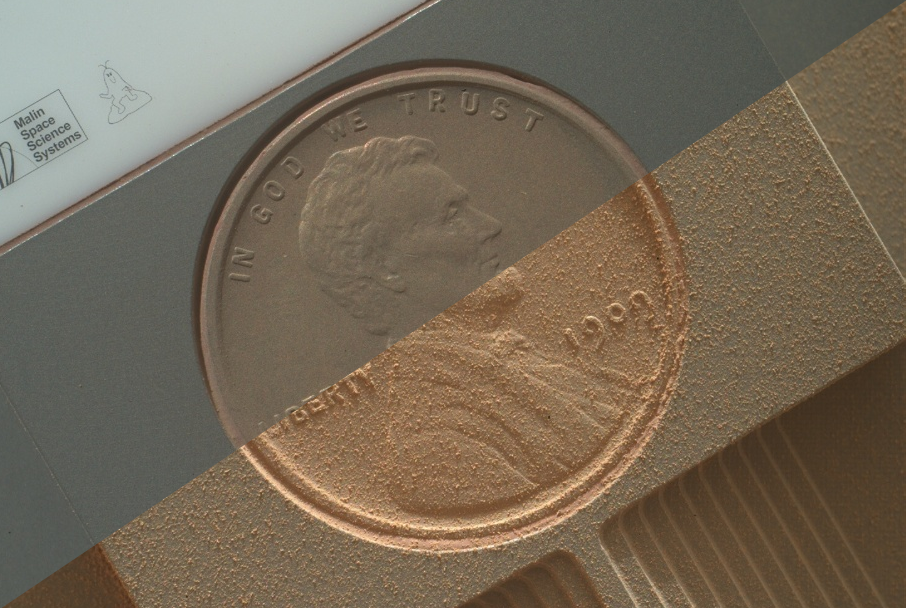 NASA’s Curiosity rover is a powerful machine with some impressive capabilities when it comes to analyzing material samples, drilling into Martian rocks, and snapping images of the planet’s surface. Despite all that, an incredibly low-tech feature on the rover is helping NASA understand Mars’ seasons and, in particular, how hard the wind blows.

The planet-wide dust storm that dominated Mars this year caked everything in a layer of dust, but it was followed by the planet’s windiest season. Now, new images from Curiosity’s calibration test show just how hard that wind is blowing, and it’s all thanks to a coin that’s over 100 years old.

The system the rover uses for calibrating one of its cameras tasks it with snapping a closeup of a 1909 penny that’s built into the exterior of the rover’s body. In images snapped weeks back, the penny and surrounding casing is covered in a rough layer of orange dust, but a photo of the same penny shot earlier this week shows that it’s a whole lot cleaner.

“Dust has certainly been blowing around in Gale Crater lately,” Abigail Fraeman of the Curiosity team explains in a new blog post. “An image of the MAHLI calibration target that came down yesterday (sol 2248) was so much cleaner than an image of the same target taken a few weeks ago when the planet-wide dust storm had just started to abate!”

It’s a pretty neat, low-tech solution for calibrating the rover’s cameras but it’s also offering insights into Martian weather at a time when Curiosity’s sister, Opportunity, remains unresponsive. It has been suggested by NASA that Opportunity entered its low-power default state and remained quiet due to dust piling up on its solar panels.

That was months ago, however, and it’s clear now that the windy season is helping to clean things up a bit. We still don’t know if Opportunity will ever snap out of its funk, but this image from Curiosity might offer a little hope.