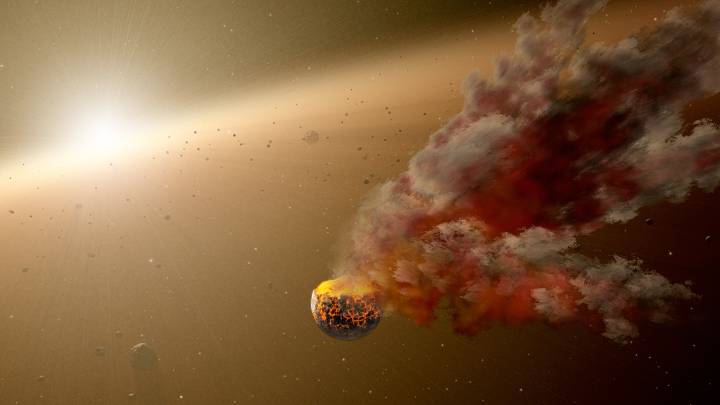 Early last year a far-off star captured the imagination of the scientific community thanks to its incredibly bizarre behavior. The star, which is officially named KIC 8462852 but is better known as “Tabby’s Star,” frequently goes dim at unpredictable intervals, and researchers were initially at a loss as to how to explain it. Later research suggested a cloud of dust was the culprit, but earlier this month the star’s light began to wane once more, and this time it got darker than ever.

Now, researchers are forced to reckon with a new data point that could put a dent in any previously proposed explanations of the brightness shifts. It seems the star just won’t let itself be explained away.

Tabby’s Star, which is named for Tabetha Boyaijan, the scientists who first noticed its strange habits, is a rare treat for astronomers. It sits roughly 1,275 light years away from Earth, so it’s not like we can just stop by and see what’s going on, and scientists have truly let their imaginations run wild while trying to explain its repeated dimming.

The star’s odd behavior was first explained away as being caused by some kind of object occasionally obscuring its light, but the amount of light being blocked seemed far too high to be any old planet or moon. With that in mind, some researchers suggested perhaps a colossal alien structure was floating around the star, blocking much more light than a planet could. This so-called “alien megastructure” would indeed explain the light dips, but the idea is so far into the realm of science fiction that most scientists have dismissed it .

In January, a new explanation began to gain support. After a closer examination of the star with high-powered tools, scientists suggested that a massive cloud of dust was actually blocking the star’s light as it passed between the star and our vantage point here on Earth. A dust cloud could be much larger than a planet and provide enough dispersion to cause the dimming, but where the dust originated and why it hadn’t settled into a ring shape was still a mystery.

This newest observation is the most dramatic dimming we’ve seen yet, and it only furthers the mystery. Perhaps a completely unknown phenomenon is at work here, or maybe it really is a huge alien solar array, gobbling up light and turning it into power for a vast civilization beyond our sight. At the moment, anything seems possible.