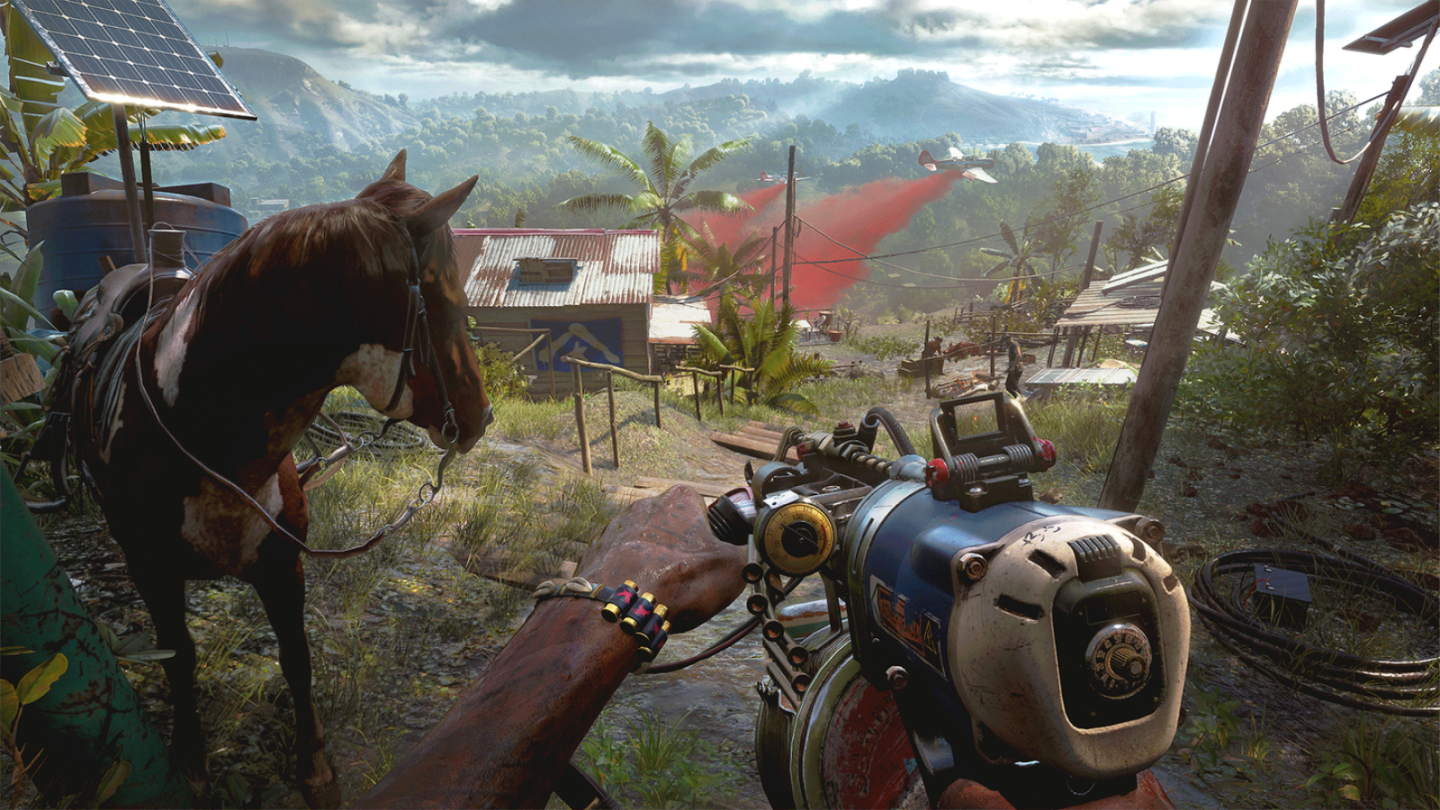 Far Cry 6 puts us at the forefront of yet another insurgency, and this time it’s Cuban-flavored. It’s hard to believe we’ve amassed six different entries in this exploration-focused open world shooter series, but here we are. Once again, we’re helping to free an oppressed people from a tyrannical egomaniac and his evil cronies. Of course, we’ve got our clown car full of zany allies and a bombastic arsenal of both realistic and fantasy weaponry to help us on our journey. Unfortunately, the trip is much too similar to those we’ve taken before, and with its latest game, Far Cry has moved past stale and into stagnation.

Not only does Far Cry 6 recycle much of what we saw in Far Cry 5, but in some ways, it’s a step backward. Unfortunately, even with the lengthy delay, the franchise’s first outing on the PS5 and Xbox Series X|S has gameplay that feels dated. 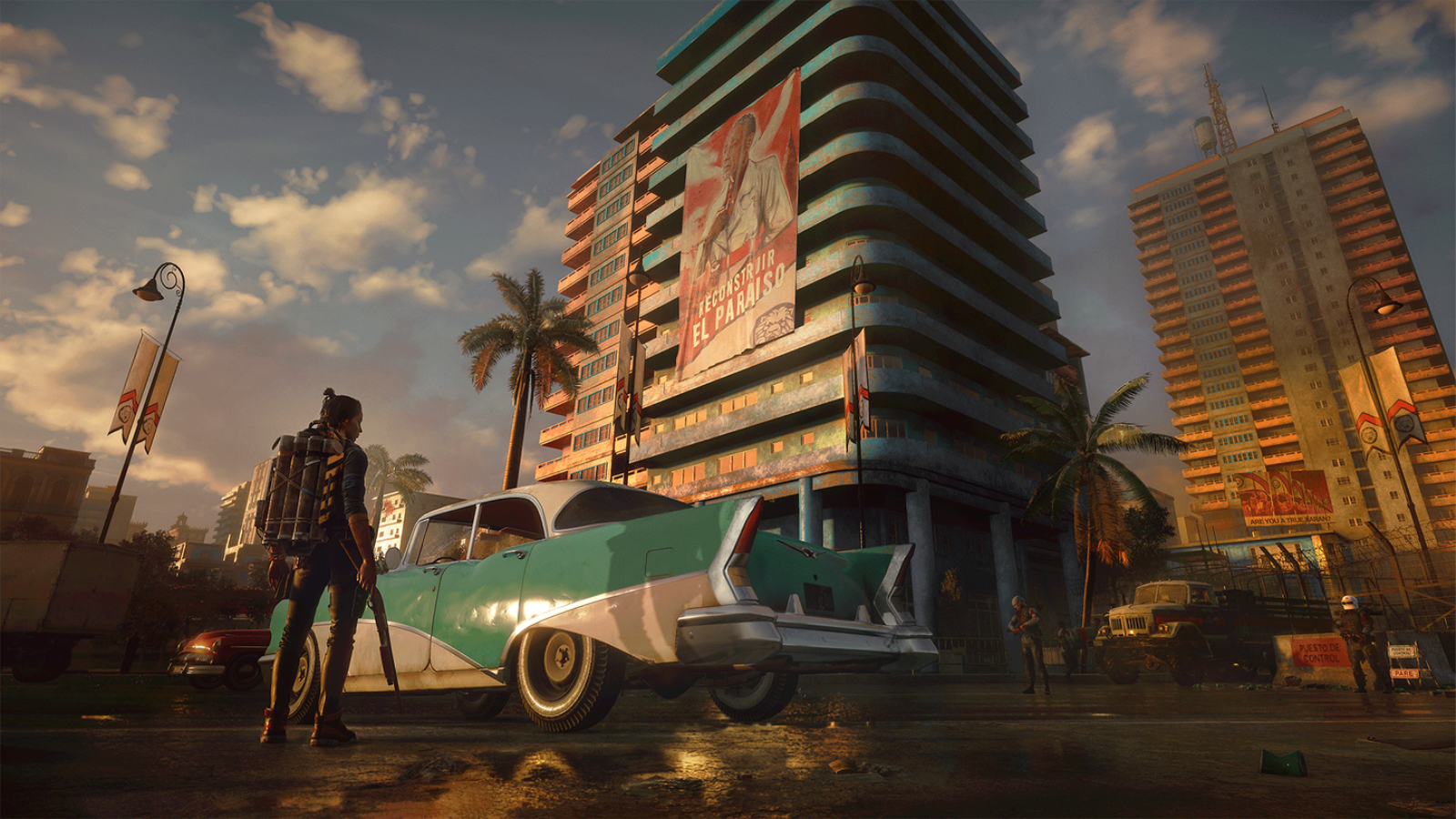 This time around, the game centers around the fictional Caribbean island of Yara (which is definitely, definitely, not Cuba). You take control of Dani (male or female)  as the flames of revolution begin to spark. Yara’s current leader, El Presidente Anton Castillo (Giancarlo Esposito), is enslaving “Fake Yarans” to work in the tobacco fields. Yara’s tobacco yields a potent anti-cancer medicine when treated with a poisonous fertilizer. Castillo hopes to use the funds and political power from having the world’s sole supply of the medicine to propel Yara from a stagnant, poor nation into the jewel of the Caribbean. The Libertad resistance begins to strike out at Castillo’s forces, and Dani is swept up into the revolution.

Unfortunately, Far Cry 6’s writing is incredibly bi-polar. So, on the one hand, you have a story with a violent, ruthless dictator who is trying to train his son Diego (Anthony Gonzalez) to be just as harsh as he is to the point where he orders one of his generals to pistol-whip one of Dani’s rebel friends to death because the boy refused to shoot him. On the other, you have zany, kooky characters who constantly talk about how fun it is to be a guerilla and blow things up, and tame alligators wearing little jackets.

As I played the game, I never knew how to feel. One moment we’re watching a father give his life to save his son, and the next, I’m painting some rooster’s name on a water tower to “make it happy” enough to join me as an Amigo. The unfortunate bit is that Giancarlo Esposito does a great job of giving Castillo an intimidating and forceful presence. If played straight, the game would have almost been able to coast on story alone, but that’s not the case. 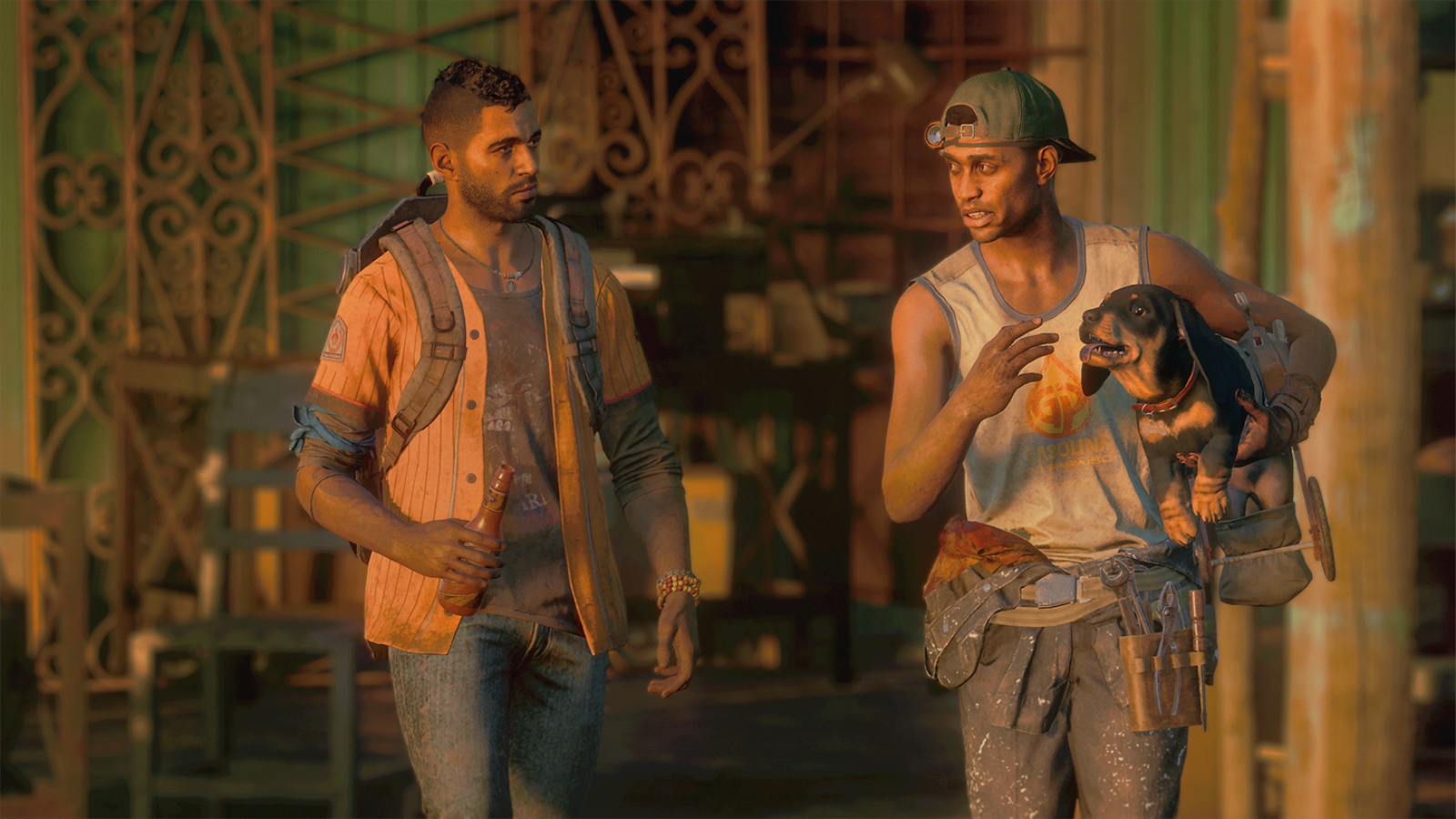 The gameplay in Far Cry 6 is much the same as it was in Far Cry 5, with a few major changes that are highly detrimental to the experience. It’s still an arcade-style shooter, and most missions still involve going to from one place to another, shooting x amount of enemies, finding an item or intel, or following an NPC around.

This time around, leveling your character has been stripped down to the bare minimum. Most customization is focused on firearms and gear, and there’s no longer any character-specific perks. The most infuriating change in Far Cry 6 is the new ammo system. Now, enemies are (even bigger) bullet sponges, and you have to equip your firearms with different ammo types to overcome this. Armored enemies, for example, require armor-piercing bullets. Using default ammo or soft-target rounds will do next to no damage. Far Cry enemies haven’t ever had anything close to realistic damage models. Still, the rock-paper-scissors aspect of the ammo types gets really annoying, especially early on when you don’t have the resources or weapon selection to do much about it.

Despite the gameplay adjustments, weapons still feel the same as they did in Far Cry 4 and 5. I wouldn’t be surprised if most of them were just copy and pasted over with some new skins. The carryover is especially obvious with weapons like the Discos Locos, a CD-launching gun that is just the Saw Launcher from Far Cry New Dawn with a fresh coat of paint.

Aircraft restrictions also lessen the fun in the game. Yara is a big mountainous island, and traveling by plane or helicopter is the most convenient way to get around. Too bad the whole island is covered in anti-aircraft batteries that can automatically lock on and kill you if you’re within a certain range of them. You can knock these installations out on foot, but it was absolutely maddening to try and fly to a mission waypoint only to be stopped hundreds of meters away when I flew into the range of yet another anti-aircraft gun.

It’s not that Far Cry 6 isn’t fun to play; it’s just that it has all these little barriers to keep you from the fun. I hate feeling like I have to overcome a game’s design to have fun in spite of it, and all too often this was where I was when playing. 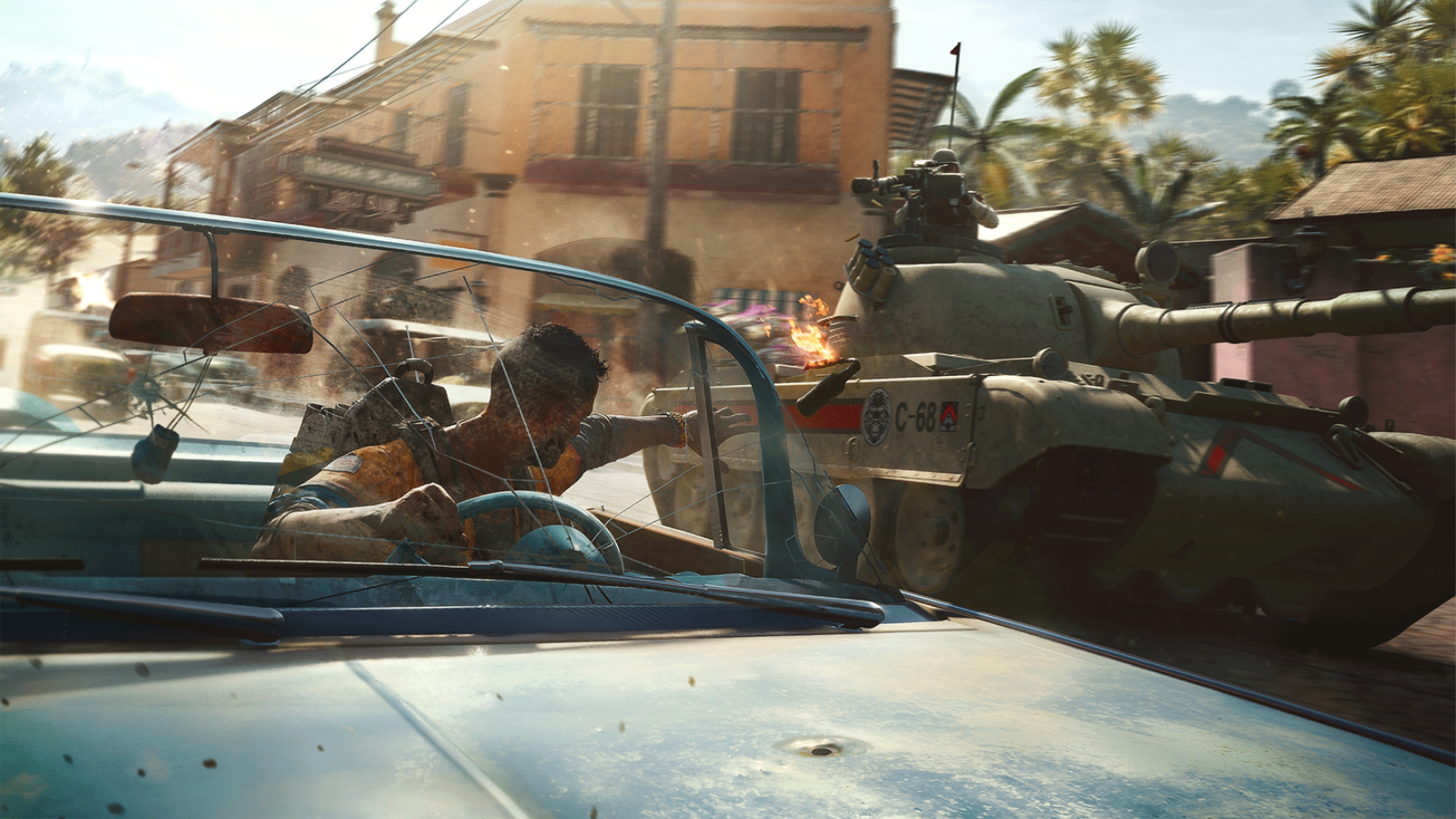 I played Far Cry 6 on an Xbox Series X, and it was a fairly pretty game. It’s a cross-generational title, and it was originally supposed to be released in February of this year, so it’s obvious that the next-gen versions took a back seat to PS4 and Xbox One. It’s not that any one thing looks bad; there just weren’t any visuals that wowed me.

It might be Ubisoft’s predilection for fictional island nations, but Yara doesn’t feel all that different than Auroa did in Ghost Recon Breakpoint. Because Yara is based on Cuba, the island does have Latin-influenced architecture and art, but it doesn’t stand out much when most of what you see is forest and slums.

The sound design suffers from the same issues. It’s just there. Almost the entirety of the soundtrack is composed of vague, inoffensive jingles. The voice acting ranges from excellent (with Anton Castillo) to serviceable, but the English script continues the terrible trope where a character speaks a sentence in English except for one Spanish word thrown in there somewhere to sound exotic.

This is something I see almost exclusively in productions with Latin characters, and here it’s especially odd because everyone is really speaking Spanish according to the game’s lore, and the English voices are just for our benefit. Now, when I play, I can’t stop thinking that a character is really saying something like, “Debemos defender nuestra patria, father.” I honestly wish Ubisoft would have just had the default voices in Spanish because what’s here is just awkward at times, and tends to break any immersion there may have been in the first place. 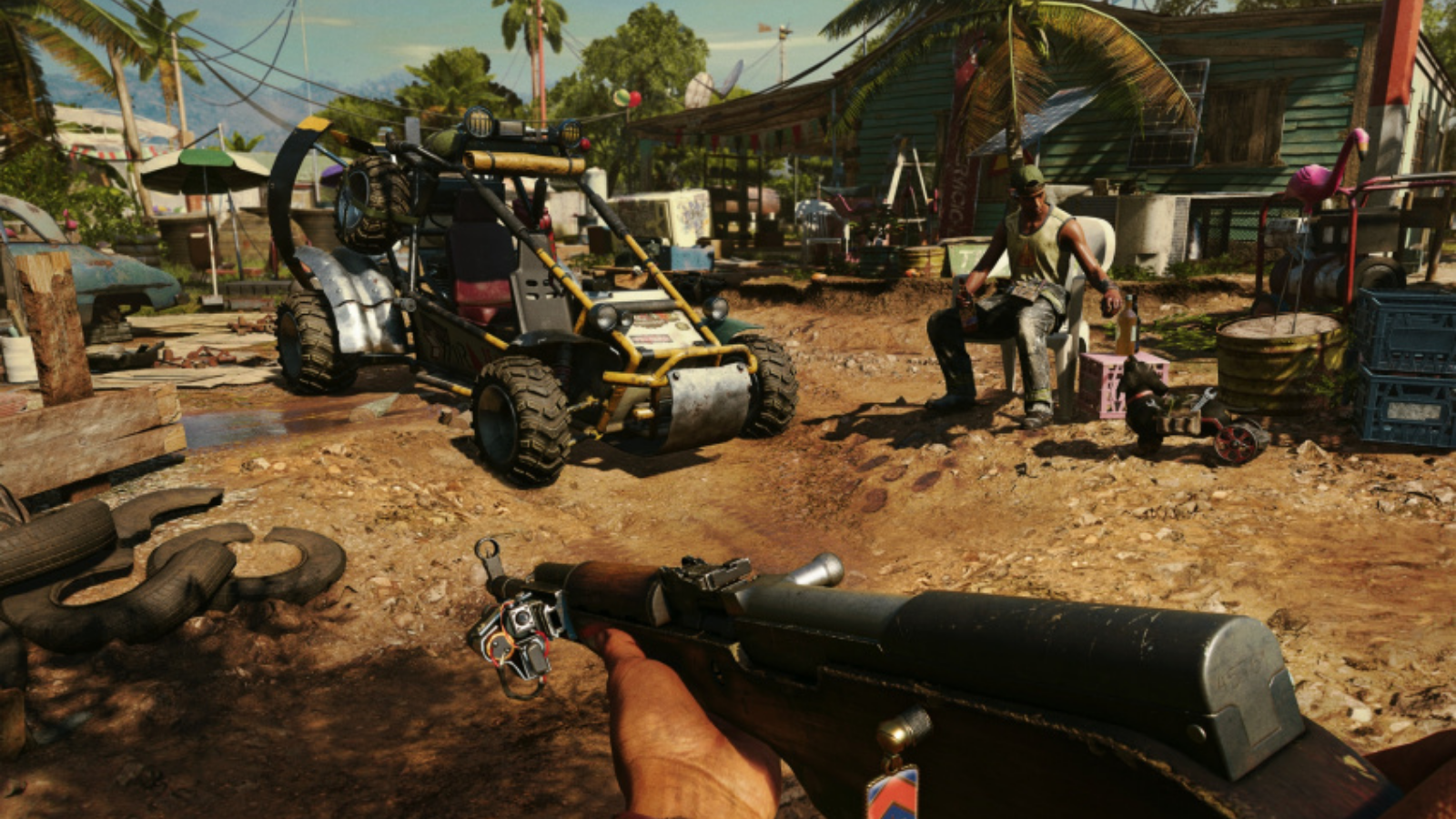 Far Cry 6 is inoffensive and safe. It plays like Far Cry 5, so if you liked that, you’ll probably like this. However, it doesn’t do anything to propel the series forward, and gamers looking for a next-gen experience will be disappointed.

There’s a good time to be had with Far Cry 6 if you want an arcade shooter that requires minimal thinking. However, most players will find plenty of games out there more deserving of their time, especially in a crowded release season like this.