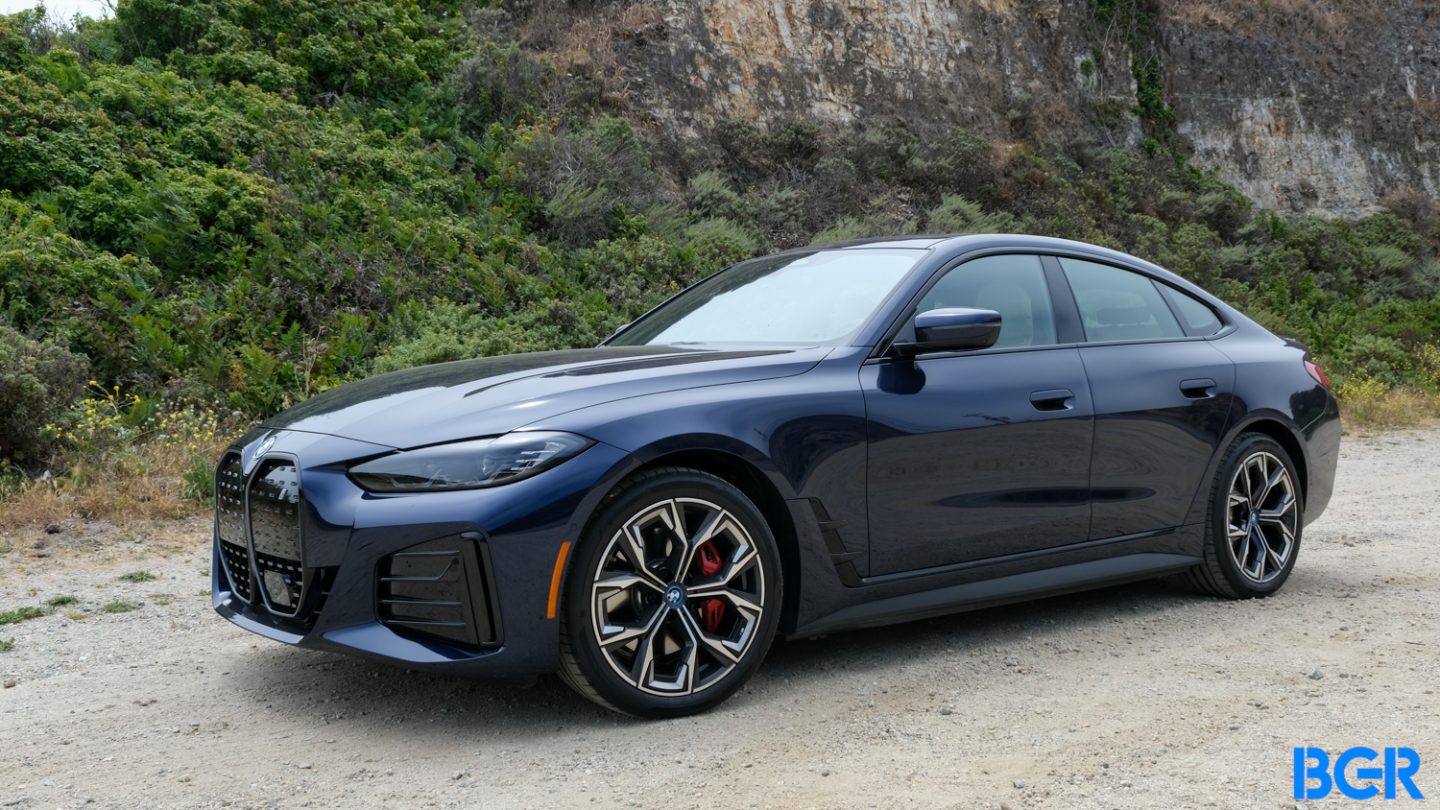 BMW is finally getting serious about electric. Over the past few years, it has released a number of plug-in hybrid and electric models, with cars like the BMW i4 leading the pack. The latest high-end i4, called the BMW i4 eDrive40, sits kind of in no-mans land. It’s more luxurious and more expensive than the Tesla Model 3, Kia EV6, and Hyundai Ioniq 5, but it doesn’t reach the heights of the Model S or Mercedes EQS.

It may live in the middle when it comes to price, but ultimately, it’s far closer to the top-end when it comes to quality. The car is far from perfect — but it proves that BMW is well-positioned to compete in an electrified car world, keeping everything that you know and love about modern BMWs, and adding an electric powertrain.

All that said, the BMW i4 still feels like a bit of a safe play from BMW. It doesn’t reinvent the wheel — and sat inside, it looks and feels like a modern gas-powered BMW. That, however, isn’t necessarily a bad thing.

The outside of the BMW i4 is almost identical to other 4-series cars. That’s not a bad thing — I really like the exterior design of the latest 4-series, though admittedly I’m still getting used to the oversized grille on the front. In BMW’s parlance, the i4 eDrive40 is a Gran Coupe, and it looks like the also-four-door 4 Series gran Coupe.

Speaking of the grille, it is, of course, a little different on the i4 than a typical 4-series, but from afar it still looks similar. While the i4 doesn’t need cooling in the same way as a typical 4 Series car, the grille on the front of this car still houses a number of sensors and the front-facing camera.

There’s plenty of styling around the car that helps make it looks sleek and stylish. The car also offers a number of sleek blue highlights — signifying that the car is electric. And on the back, instead of the exhaust pipes, you’ll get an air diffuser.

The wheels on the i4 eDrive40 are typically 18 inches, but our review model has been upgraded with 19-inch wheels, which look awesome. You’ll pay for the privilege, but many will be happy to shell out for it.

Much of the interior of the BMW i4 eDrive40 is similar to other 4 Series cars, but like on the outside, there are a few differences to note. Regardless, however, the car is still comfortable and premium, offering beautiful stitched leather throughout and easy-to-access controls that you’ll get used to in a heartbeat.

At the back of the car, you’ll get a solid amount of room for passengers, and even adults should be able to sit comfortably in the back with the legroom and headroom available. The legroom isn’t huge, but it’s definitely enough for most situations, and that helps make the car a decent choice for the family.

The trunk room in the car does leave a little to be desired. The hatchback opens to 10 cubic-feet of space, however, you can fold down the rear seats to increase the space as needed. It’s enough for day-to-day use and grocery shopping, but not much more than that.

Of course, perhaps the biggest difference between this and a typical 4 Series is the big, expansive display at the front.

The infotainment display on the BMW i4 eDrive40 is a beautiful 14.9-inch touchscreen that gets bright enough for the vast majority of use-cases, and houses BMW’s latest infotainment system, iDrive 8. The display is bigger than the i4’s non-electric siblings, highlighting the tech-forward approach.

iDrive 8 is a definite step forward over the previous-generation iDrive 7, but it’s still not the beautifully-designed interface that you might want from your car. The interface is organized into a home screen, with an app grid for the rest of the features. You can navigate the interface with a rotary dial on the center console, or just by using touch. It’s fine, and you’ll get used to the overall layout. And, the interface was relatively responsive to touch, which is more than many competitors can claim.

Thankfully, you don’t have to use iDrive 8 all that much if you don’t want to. The car supports both Android Auto and CarPlay through a wireless connection, making it super easy to avoid the car’s built-in infotainment system.

One of the best things about electric cars is that they’re extremely responsive and able to get fast, quick. The BMW i4 is no exception to that rule — it sprints from the start line, getting to 60 in 5.5 seconds. It’s not as quick as some of the other options out there, or even the M50 model, which gets to 60 in under four seconds. But it still feels plenty quick, and easily fast enough for a sporty-feeling experience.

The car has three different driving modes: “Eco Pro,” “Comfort,” and “Sport.” Considering the fact that I wasn’t planning on taking this car on any longer road trips, I kept it in Sport — which feels noticeably more responsive than the other modes.

Now, let’s get something out of the way. This looks and feels much like other sporty BMWs out there, but some others do feel a little more engaging. Some of that simply has to do with the feel of a high-end gas-powered car — which is its own thing. This is a different thing — but if you can look past that, its just as fun.

The BMW i4 eDrive40 has a 80.7 kWh battery, and it’s able to power the car for up to 300 miles — which is on the higher-end of electric cars in 2022. You’ll get a lower drive, in exchange for higher performance, with the M50 model. You’ll have to decide if that’s worth doing for your needs, but I prefer having more range.

Charging the car is pretty easy. While it doesn’t quite reach the heights of the 350kWh charging on offer by the likes of the Kia EV6, it does charge at up to 200kWh. That allows it to charge to 80% in around 30 minutes, which is not bad at all. A level 2 home charger, with a charging speed of 11kWh, will get the car charged overnight.

The BMW i4 eDrive40 offers a number of safety and driver-assist features that could come in handy — however you’ll have to pay for the privilege of using some of them. I would argue that too many of the features require an upgrade, given the fact that more and more cars are offering smart features these days.

On the base model, you’ll get a backup camera and things like blind-spot monitoring, which seems like the bare minimum. You’ll have to add the Driver Assistant Pro package, which we had in our review model, for some of the other features. The package will get you adaptive cruise control and lane-keeping allowing the car to essentially drive itself on the highway. There’s also the Parking Assistance Package, which we also had, and lets the car park itself in some situations, and gives you a 360-degree camera view, which is super helpful.

The BMW i4 eDrive40 is a great middle-ground between the cheaper electric cars in the sub-$50,000 range, and the more expensive luxury options. It boasts a comfortable ride, a fun driving experience, and more.

There is a ton of competition in the electric car world, but if you want luxury without paying an arm and a leg, then the BMW i4 eDrive40 is an excellent option. If you’re willing to pay more, you can get better performance with the M50 model, though you’ll sacrifice performance to get it. Alternatively, if you’re willing to pay a lot more, you could go for something like the Porsche Taycan, Lucid Air, or Tesla Model S.

Yes. It serves as a great middle-ground between the high-end and cheaper electric cars.

What is the range of the BMW i4?

How long does it take to charge the BMW i4?

It depends on how fast the charging station is. The BMW i4 supports charging at up to 200kW, and at that speed, you should be able to charge to 80% in around 30 minutes.