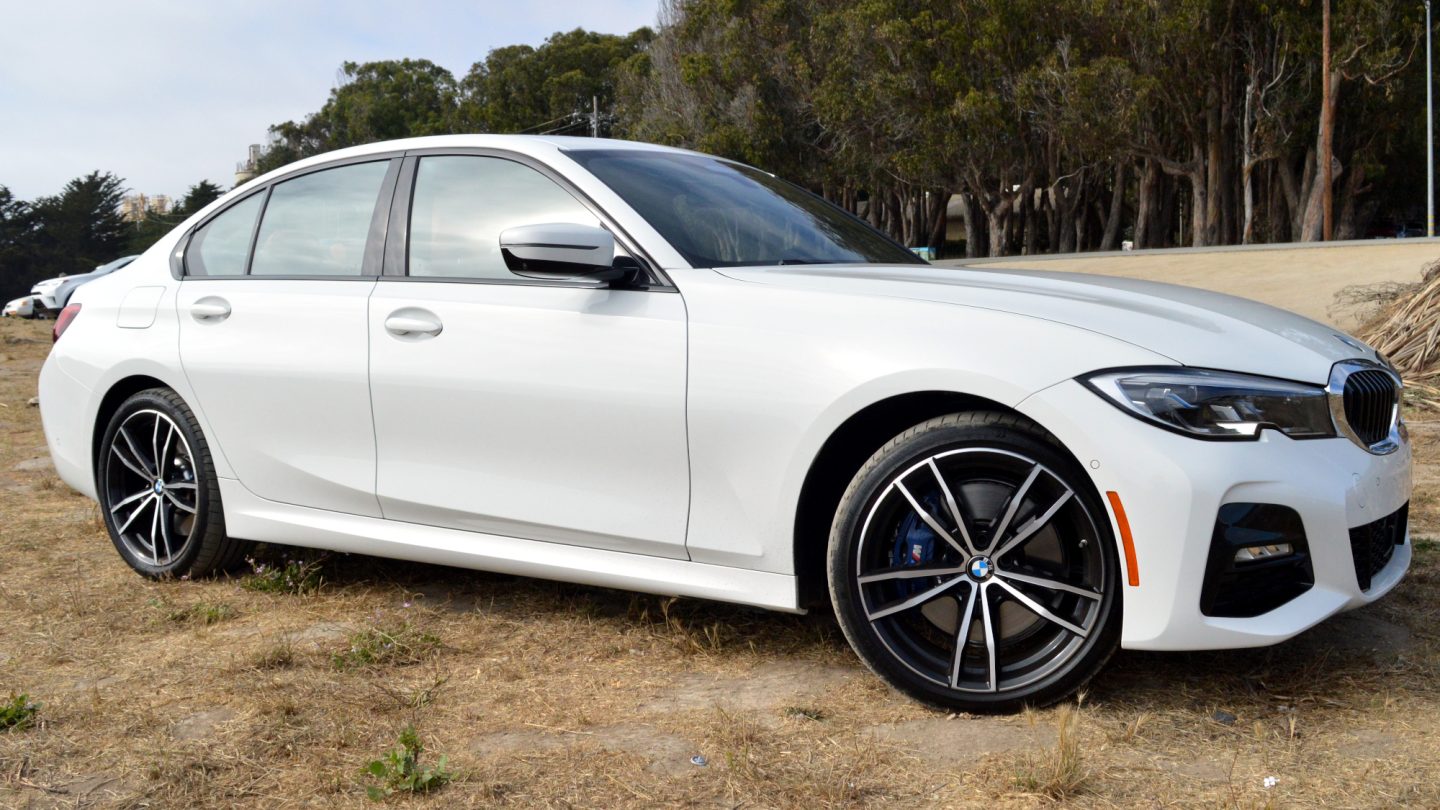 Electric cars are coming. Most of the major car manufacturers have finally started launching at least somewhat accessible EV models, and BMW, through cars like the i3 and i8, is among them. But those cars aren’t exactly for the masses. The company has yet to launch a fully electric sedan — a hole that the i4 will fill when it launches next year.

But that doesn’t mean that you have to rely fully on the combustion engine if you want a BMW. The BMW 330e is a plug-in hybrid that’s aimed at offering the best of both worlds. It has a 12-kilowatt-hour battery pack that can deliver 22 miles of all-electric range. And, it has a 2.0-liter turbocharged engine that can kick in after the battery is depleted, or help out with a little extra oomph, depending on how you prefer to drive.

BMW 330e Get a Quote Available from a partner

Sure, plug-in hybrids are still a stepping stone between the engine-powered cars of old and the fully electric future that’s on the way. But sometimes you need a stepping stone — and if that’s you, then the BMW 330e is worth considering.

The BMW 330e doesn’t go out of its way to look overly flashy. It looks like a BMW 3-series — and that’s a good thing. It retains the classic BMW front grill, instead of adopting the newer, taller grill found on the BMW 4-series. Some prefer that, some don’t. 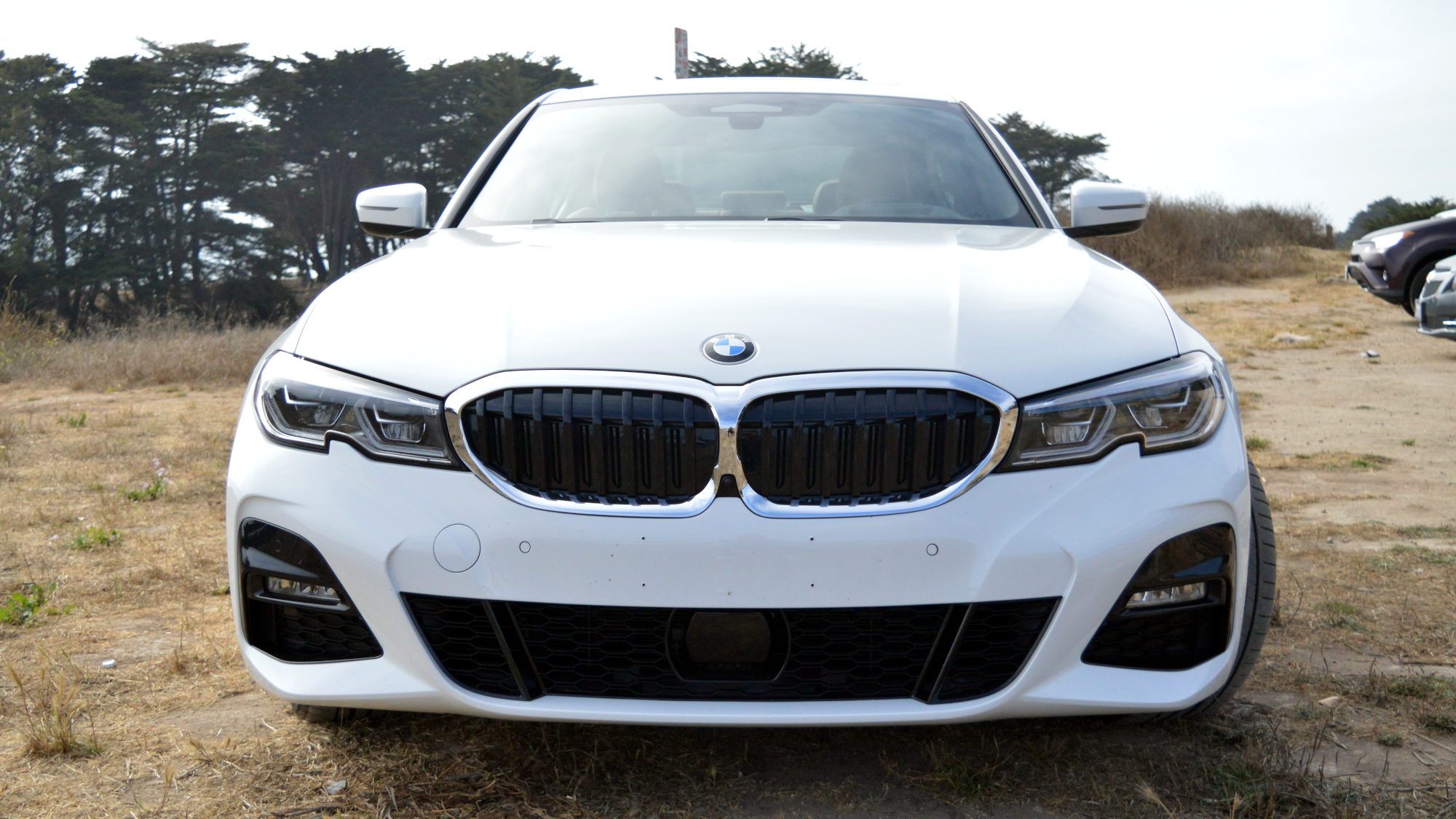 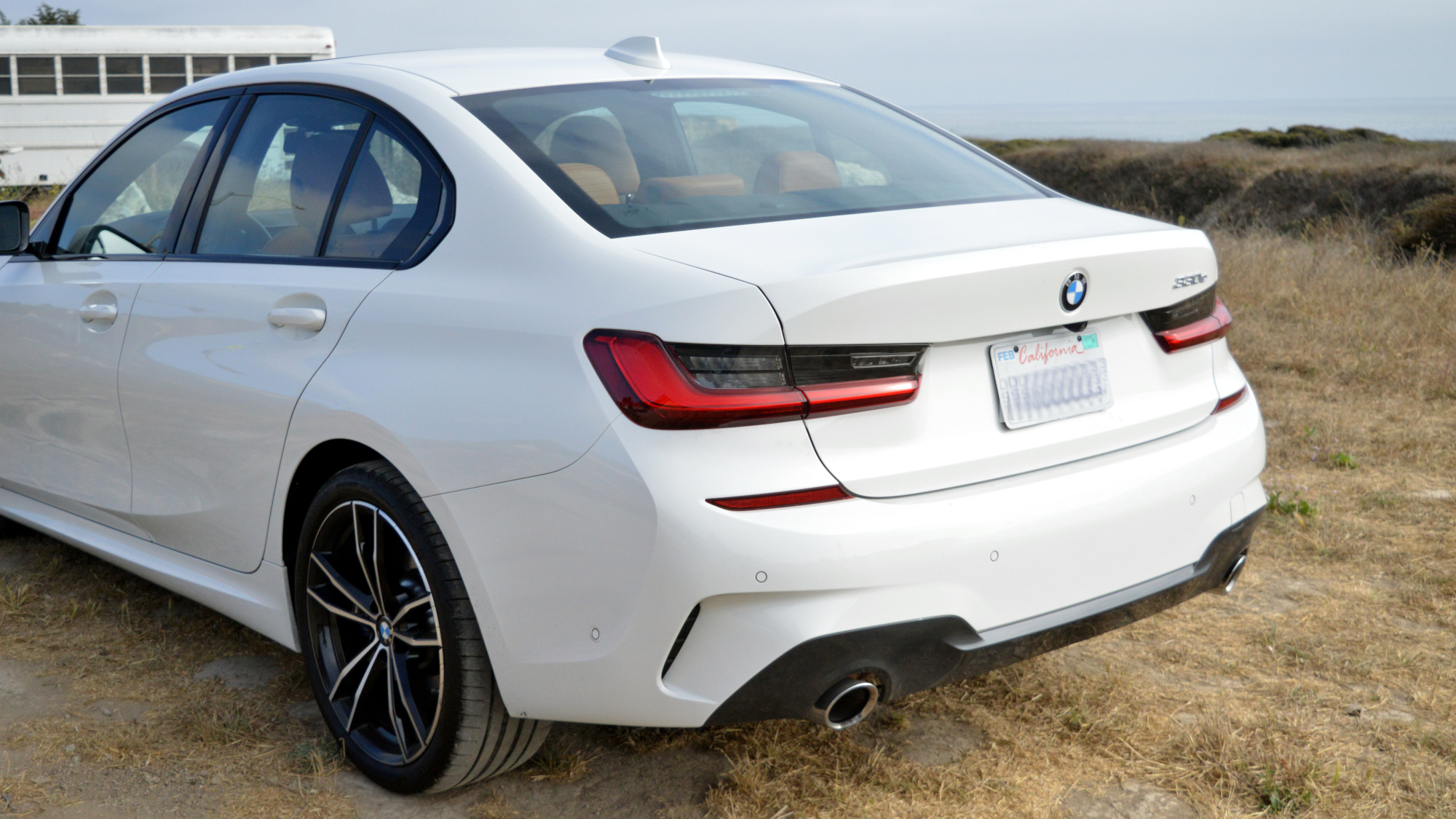 The model we’re reviewing is in Alpine White, though the car is available in quite a few different colors, both inside and out.

There are plenty of little details that enhance the overall look of the BMW 330e. The model we’re reviewing is laden with extras, thanks to the M Sport package. From the blue flash of the M sport brakes to the 19-inch M wheels, the car clearly looks premium. Even without those extras, however, the overall look of the BMW 3-series is tried and tested. You won’t be disappointed.

While the car looks pretty much identical to the 330i from the outside, there are a few tweaks. Chief among those is the J1772 charging port, behind a door on the front left. It’s pretty easy to access, though that will likely depend on the layout of your garage or carport. That port supports level 1 and level 2 charging, though unfortunately, it doesn’t work with DC charging. Considering the smaller battery, that may not be a huge issue for most. Most should be able to fully charge the battery on a Level 1 charger in around 10 hours, or around 3 hours on a level 2 charger.

While the exterior of the BMW 330e looks great, in my opinion, the interior looks even better. Our review car offers the Cognac upholstery, which I really like. Everything in the interior is soft to the touch, and while you could pay an extra $1,450 for leather upholstery (over the included SensaTec leatherette), most shouldn’t bother. It’s already premium enough.

Generally speaking, the interior of the car is very welcoming and friendly. The center of attention, of course, is the 8.8-inch touch display. It’s surrounded by controls and preset buttons that can be tailored to the driver’s preferences. We’ll get into infotainment a little later.

The other main display in the 330e is a 12.3-inch instrument cluster, which is totally digital. The cluster offers a ton of information, and it changes a little depending on the driving mode that you’re in. It even changes colors. Fun!

In the dark, the car offers more highlights and details too. There are nice blue LED light strips running across the dash and doors, and it complements what is, in our car, an Ash Grey wood trim nicely. 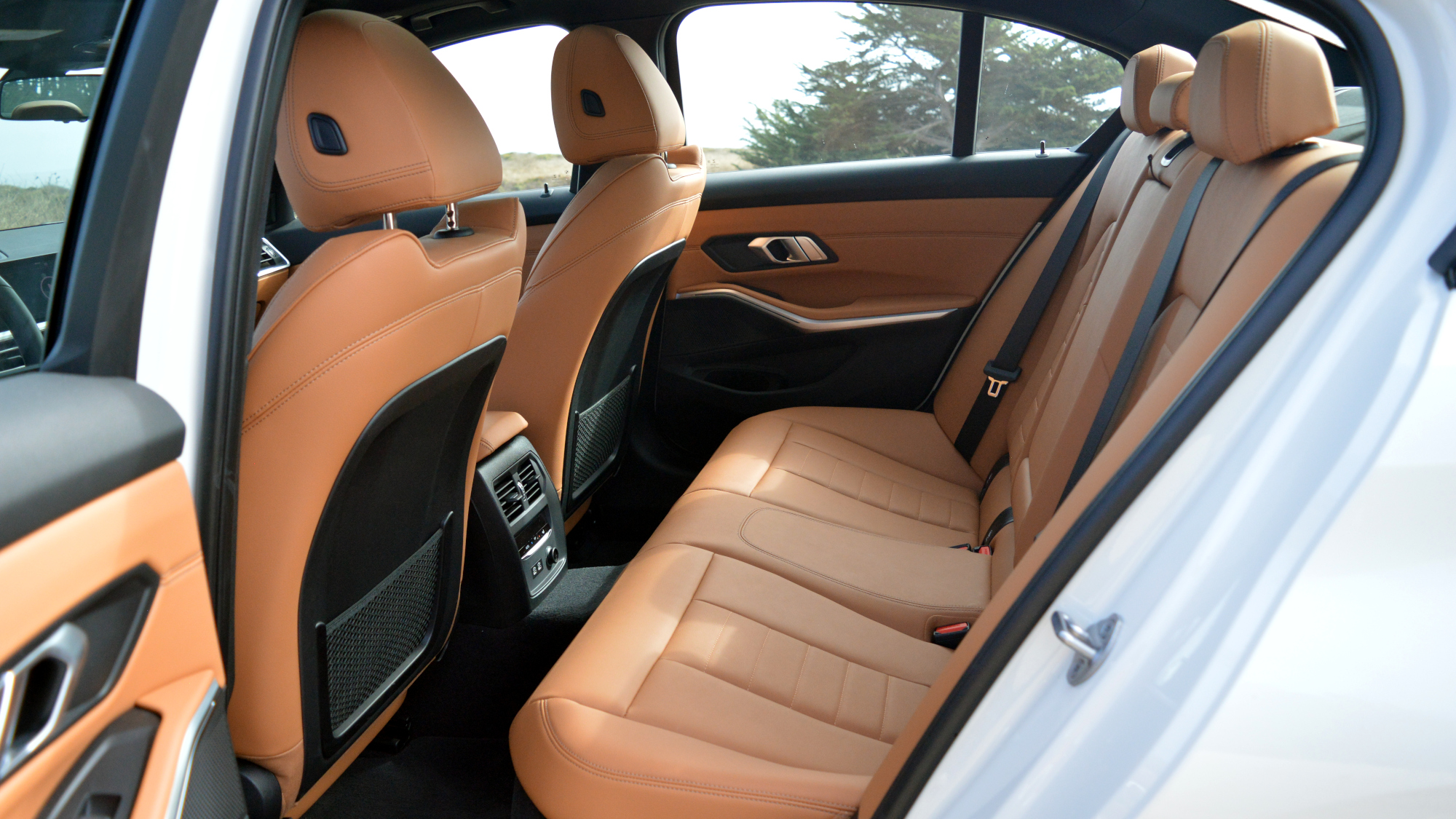 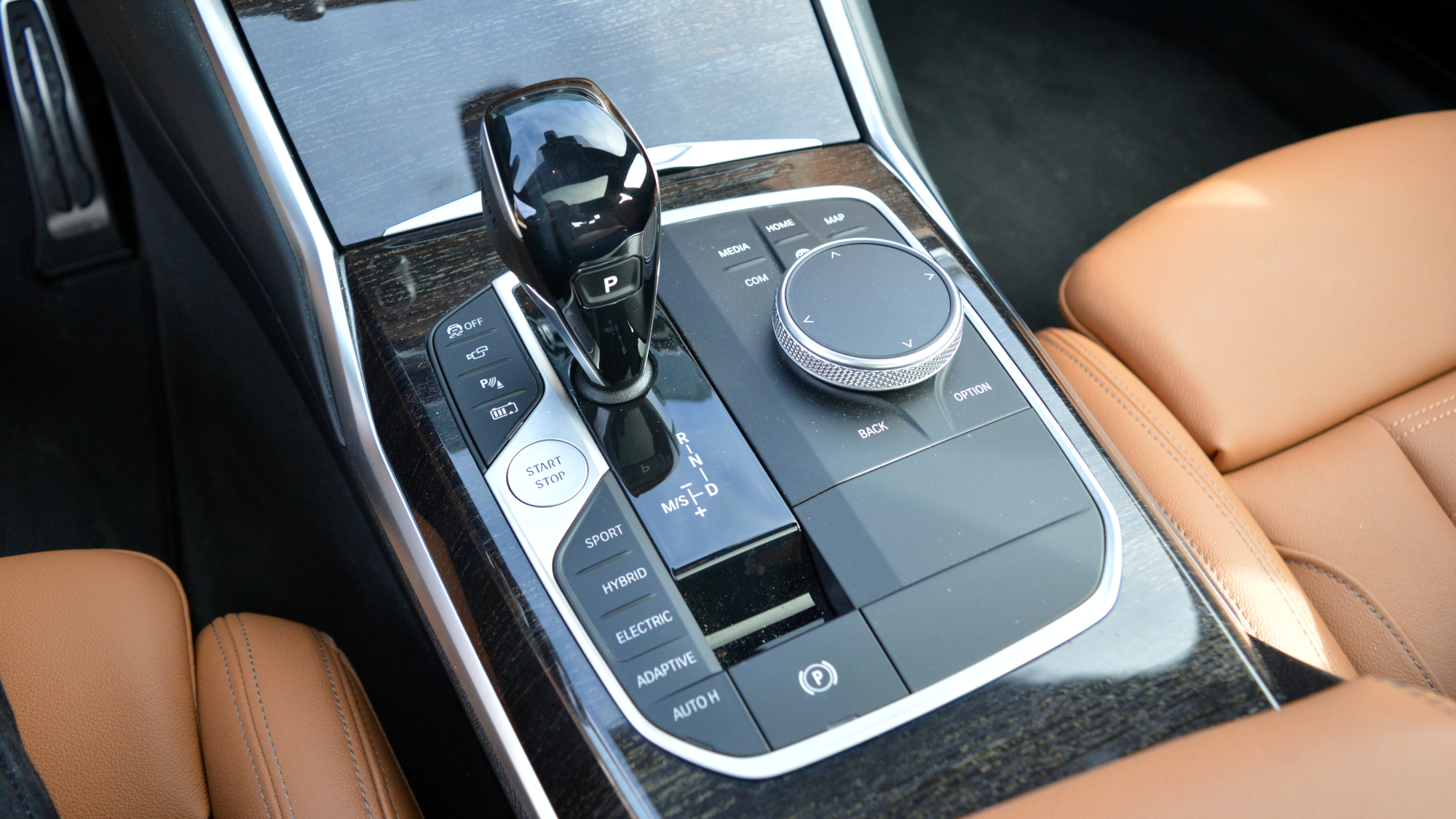 The trunk is decently sized, but not huge. It’s a little smaller than the 330i and will fit a large suitcase when needed. Because of the layout, it actually has a weird step-down design, which can either allow for a small second compartment, or a larger compartment with a step. You may want to change that layout from time to time depending on what you’re trying to store. There is no spare tire, unfortunately.

Our review car also comes with the Premium package, which includes things like a heated steering wheel and a heads-up display. I quite like the heads-up display. It definitely makes it easy to see information with as little eye movement as possible. It’s hardly necessary, though.

BMW’s iDrive infotainment system has been getting better and better, and in 2021, it’s a pretty full-featured system that almost anyone can make use of. That’s thanks in part to the support for wireless CarPlay and Android Auto.

Even if you don’t want to use CarPlay or Android Auto, iDrive itself is packed with features. As is common for carmakers, the system isn’t the most well-designed out there, but you’ll get used to the overall look and feel of it, and will eventually find the settings you’re trying to find. Part of that process involves digging through all the menus when you first get the car and setting your preferences and defaults. After that, you’ll never need to find many of the settings again.

BMW is clearly trying to cater to everyone here. The display works perfectly well as a touch screen, but if you prefer to use buttons and dials, you’ll find those in between the front seats. I ended up not really using those, but some will prefer to navigate with the directional buttons, especially while driving. With the Premium package, you can also use gestures, like moving your finger in a circular motion in front of the display to control motion. I used it once, and never again — it feels like a gimmick.

Moving along to the instrument cluster, AKA the other display, and it’s pretty well-designed. You’ll get all the basics, plus things like the remaining power left in the battery, the time to a full charge when plugged in, and more. If you’re really nerdy, you can see when the car is using regenerative braking to charge, and when it’s using the so-called “eboost” feature for that extra oomph. As a nerd, I appreciate that.

The car can connect to the MyBMW app, which allows you to remotely access things like climate control, locks, and lights, plus you can get a remote camera view, see where the car is located, and check the charging status. The app is actually pretty comprehensive. The one feature I couldn’t find was Apple CarKey, and it doesn’t seem as though the car supports that tech.

The BMW 330e offers a few safety features that could come in handy. There are basics, like automatic emergency braking and forward-collision warning, but that’s about all you’ll get in the base model.

Add the Driving Assistance Package, and you get some nice features. For example, you’ll get Active Blind Spot Detection, which frankly should be a part of the base model. Other added features include BMW’s Active Driving Assistant, which can automatically brake to prevent collisions and accidents with pedestrians. The package also comes with a Lane Departure Warning, and a Park Distance Control, which uses various sensors to help you park. I found this feature to be the most helpful and used it pretty much every time I parked.

It’s definitely a solid set of features, but I would have liked for more to be present in the base model. They all help tie the experience together nicely, and if you don’t mind spending the extra cash, it’s worth considering.

The BMW 330e is quite a bit heavier than the 330i, but it’s clear BMW has still made an effort to ensure that the car handles beautifully, and is an absolute joy to drive. It’s highly responsive, and after a few days, you’ll notice the personality on offer by the different driving modes.

There are three main modes here, with a few “sub-modes” in each. The first is Sport mode, which prioritizes performance at the expense of the battery. Unlike the other two modes, Sport mode makes use of the electric motor to accelerate faster and ramp up on power — not to preserve battery.

Next up is Hybrid mode, which is the default. This mode offers three variants — Standard, Eco Pro, and Comfort. Hybrid modes essentially trade-off between the electric motor and the engine, and the transition is very seamless. It’s very hard to tell when the hand-off happens most of the time, making the car feel truly hybrid.

Last but not least is Electric mode, which relies entirely on the electric motor to power the car. There’s a noticeable drop in power in this mode, but of course the trade-off there is that you don’t use any gas. Once the battery is depleted, the car will once again lean on the gas engine.

Generally, I stuck with Hybrid mode, though I would be lying if I didn’t hit the freeway in Sport mode every now and then.

The battery in the car is capable of delivering around 23 miles of EV-only driving, which isn’t bad, but certainly not enough to rely on all the time. Some will be able to rely on that most of the time. For example, if you have a short commute and charge every night, 23 miles may be enough. But don’t expect to get much out of the battery on road trips. 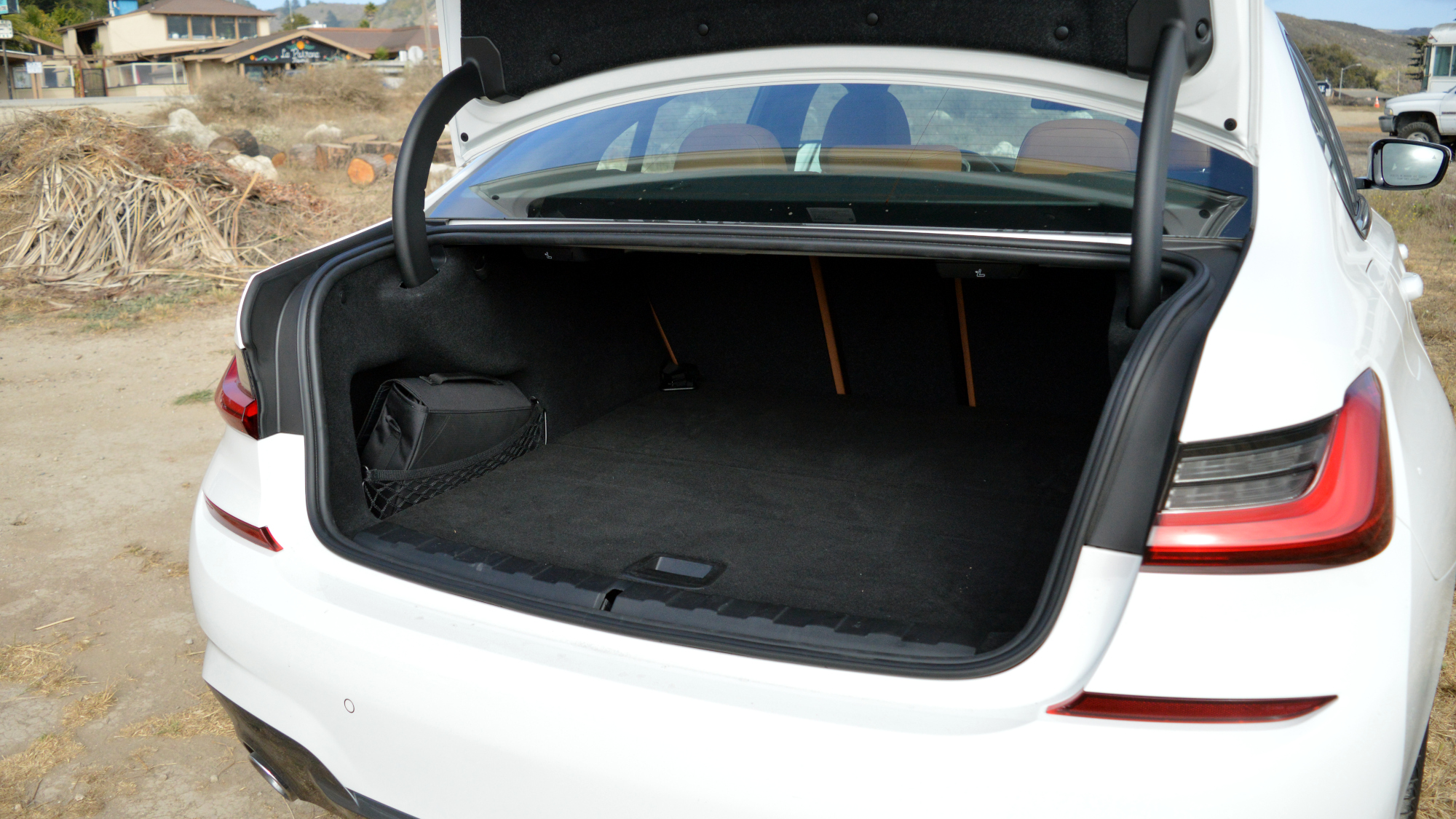 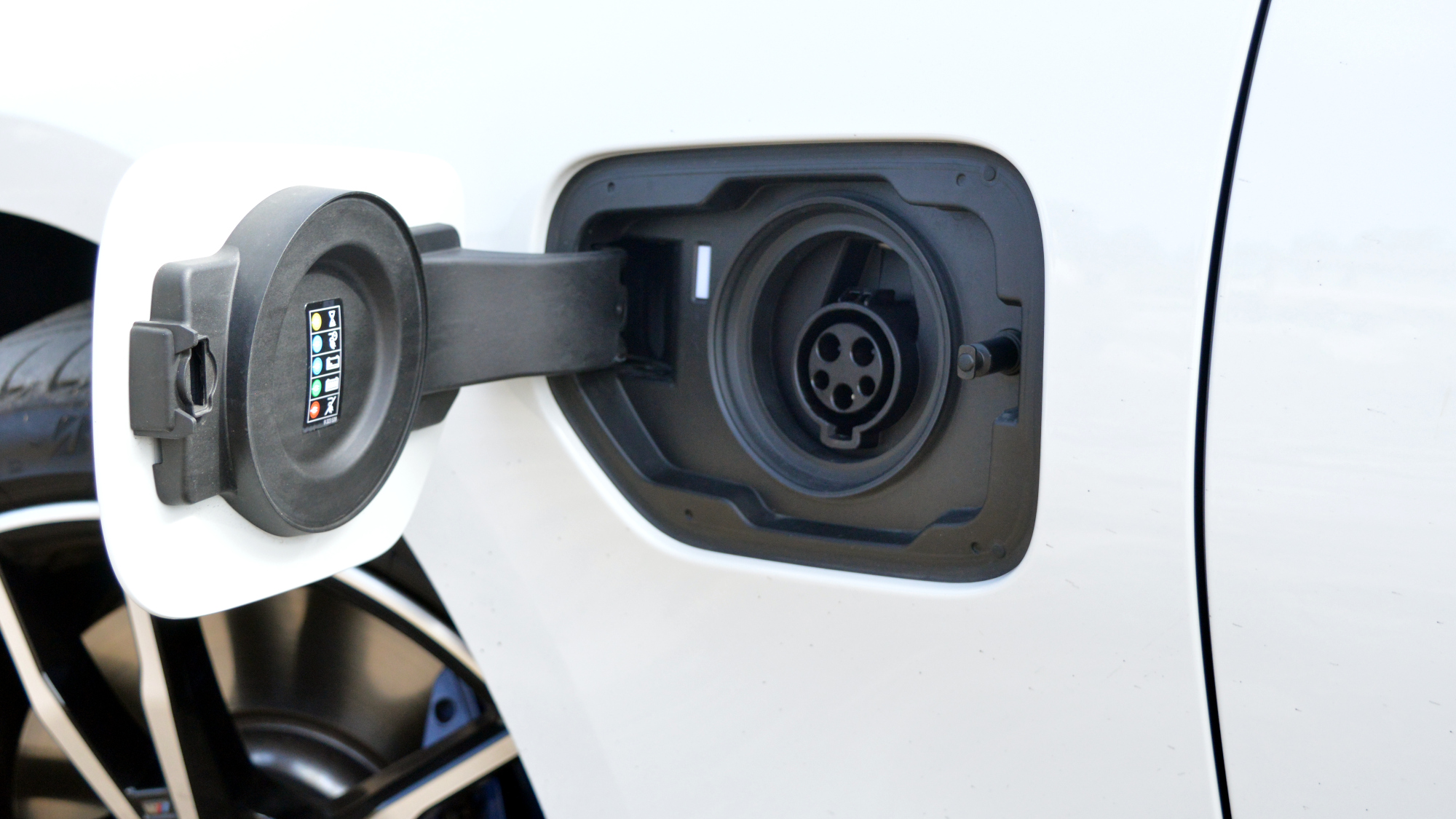 The battery can serve another purpose though, and that’s to give the car some added oomph. With the gas engine only, the car gets 181 hp, but the electric motor gives the powertrain a total of 288 hp. You can really notice a difference, and in both Sports and Hybrid mode, there’s some serious power to enjoy. The car claims a 0-60 mph time of 5.6 seconds.

There’s no denying it — the BMW 330e is for those who want to electrify, but feel concerned about charging infrastructure and other related challenges. I get it. Frankly, the charging infrastructure in the U.S. is abysmal. It’s getting better, but until it does, you shouldn’t expect to be able to rely on public charging stations unless you have a Tesla.

But not everyone needs to rely on public infrastructure. Perhaps you have a garage that you can install a charger in. Or, perhaps your workplace has charging stations. If that’s you, you could likely rely on the electric motor in the car for the majority of your day-to-day life, and lean on the gas engine the rest of the time. The BMW 330e is a perfect fit for that lifestyle. It’s an excellent stepping stone.

There isn’t a ton of competition in the luxury plug-in hybrid (PHEV) space. If you like the idea of a plug-in hybrid but don’t want to compromise on the driving experience, the 330e is an excellent way to go.

That said, it’s also worth considering the Volvo S60 Recharge, though it’s quite a bit more expensive than the 330e. If you’re not interested in stretching your budget beyond the 330e’s price tag, stick with the BMW.

Yes. If you’re not ready to make the jump to a fully electric car, the BMW 330e is an excellent option.