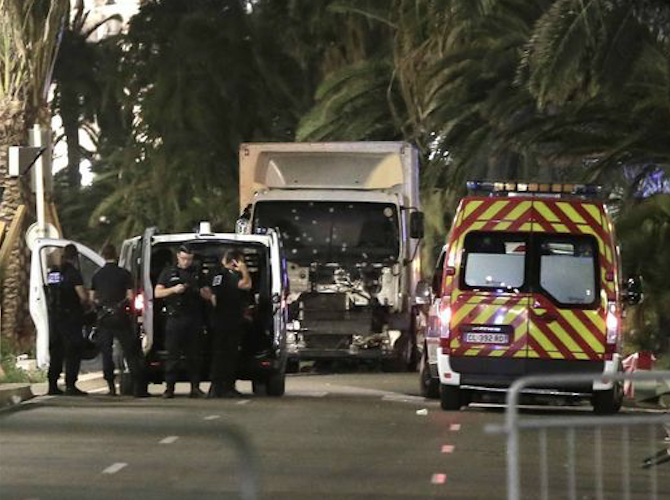 You don’t have to be French to know that Bastille Day is the country’s national holiday. It’s a day for impressive military parades in Paris and fireworks shows across the country. But July 14th will also be remembered henceforward as the day a person took a 25-ton truck and drove it into a crowd in Nice during the celebration. The attack, labeled as terrorism by authorities, left at least 84 people killed, and hundreds of others injured. At least 18 of the injured are in critical condition, officials said.

The driver was identified as a 31-year-old Tunisian-born Frenchman, Reuters reports. He was shot and killed by police following the carnage. He had a gun on him, and was known to authorities for common crimes, but not to intelligence agencies.

The attack occurred just after 10:30 PM local time, and the truck drove for some 1.5 miles along the promenade that was filled with people, after mounting the curb.

“France is filled with sadness by this new tragedy,” he said. “There’s no denying the terrorist nature of this attack of yet again the most extreme form of violence.”

“I saw people go down.” Franck Sidoli told Reuters. “Then the truck stopped, we were just five meters away. A woman was there, she lost her son. Her son was on the ground, bleeding.” Like Sidoli’s there are similar heartbreaking accounts from eyewitnesses who survived the horror.

High-ranking officials from other countries expressed their concern following the attacks. President Obama condemned the attacks, USA Today reports, offering French officials “”any assistance that they may need to investigate this attack and bring those responsible to justice. We stand in solidarity and partnership with France, our oldest ally, as they respond to and recover from this attack.”

The incident comes eight months after the deadly attacks in Paris in mid-November, but a link to ISIS is yet to be established.

In the past weeks, various attacks hit other countries, including Turkey’s Istanbul Ataturk airport. That bomb attack left 41 dead and hundreds injured.

Check out Reuters and USA Today’s coverage at the links below for more details about the Nice hits.