Verizon is recalling a huge number of its popular mobile hotspots due to a very serious issue with the rechargeable batteries that are built into them. In a new bulletin posted by the US Consumer Product Safety Commission, Verizon explains that a whopping 2.5 million of its mobile hotspots may overheat. In some cases, this overheating can lead to fires, causing property damage as well as potential injury to users.

The hotspots included in this recall are the Ellipsis Jetpack model which is oval in shape and features the Verizon logo prominently on the front. They are “dark navy” in color but may appear black. In images of the recalled devices that are included on the recall, the hotspots are dark enough that they could easily be confused for being black. Now, 2.5 million of them have to be returned.

This recall involves Ellipsis Jetpack mobile hotspots imported by Franklin Wireless Corp. The recalled Jetpacks are dark navy plastic oval devices that are about 3.5 inches wide and 2.25 inches tall. ‘Verizon’ is printed below the digital display window on the front of the device. The charger provided with the recalled Jetpacks has a sticker on the wire that states: Compatible: FWC MHS900L, Model: FWCR900TVL, DC151030.

According to the company, the devices were sold nationwide at Verizon stores and other retailers, and some were even sold to school districts across the US. They were also available for purchase online and they were sold between April 2017 and March 2021. They retailed for between $50 and $150. 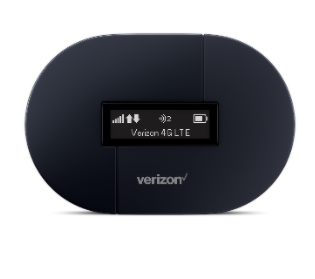 Verizon says that it has received 15 reports of the hotspots overheating so far. The reports include six instances of fire damage to property, including beds and flooring. Two of the reports include injuries to users which are described as “minor burns.”

Verizon is asking anyone that has one of these hotspots to perform a software update to their devices if they absolutely have to use them. The company is offering replacements, but while you wait for the new devices to arrive, you’ll need to take these steps to ensure your hotspot doesn’t burst into flames:

If consumers must use the product for internet access, then they should take the following steps:

Turn the recalled hotspot “on” and plug it in to allow the hotspot to receive two over-the-air automatic software updates that:

(a) enable the device’s identifying number to be viewed on its scrolling screen and
(b) prevent the device from charging while the device is plugged in and powered on.
After the software update is applied, users should:

(a) Leave the device powered on while it is plugged in.
(b) When not in use, the device should be turned off, unplugged from its power source, and securely stored.

The contact information for the recall, which you can use to request a replacement free of charge, is below.

Verizon toll-free at 855-205-2627 from 8 a.m. to 10 p.m. ET or online at http://www.EllipsisJetpackRecall.expertinquiry.com or http://www.verizon.com and click on “Recalls” on the bottom of the page for more information.