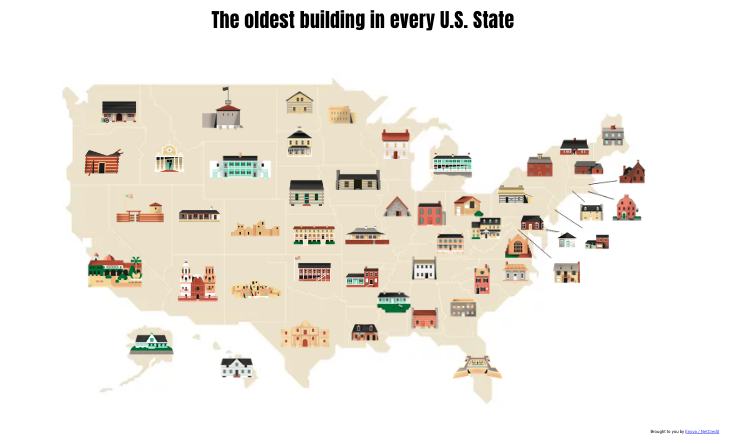 We report so much on the bleeding edge of all things tech, but there’s another story on the far opposite side of that world that’s just as fascinating and as relevant to everything we see around us today. We’re talking about history — more specifically, the history of the built environment, which is the focus of one site that’s gone ahead and mapped the oldest still-intact structure in all 50 states.

Cottages, fortresses, churches and more, it’s all here. The folks over at NetCredit compiled this roundup of fascinating old structures to visit that could serve as great fodder for mapping out a roadtrip, and we thought this might also be fun to spotlight for your weekend reading pleasure.

“Some of the buildings we’ve chosen only had a brief moment in the spotlight,” the site explains, “like Nevada’s Old Mormon Fort, abandoned just a few years after the Utah War. Others have built up centuries of history, such as the Louis Bolduc House in Missouri. It was built for French-Canadian settlers in 1798, and their descendants continued to occupy it right up until the 1940s.

“Some are impressive feats of construction, such as the wattle-and-daub Cataldo Mission in Idaho. Not a single nail was used in the entire building! Others, though, were less successful. Ka Hale Lāʻau in Hawaii was designed in and brought over from New England, with only a later realization that the structure was completely unsuitable for comfortable living in a tropical climate.”

Other examples include the White Horse Tavern in Newport, Rhode Island, a red, timber building that originally functioned as a private residence and was converted into a tavern in 1673. Some of the oldest structures are pretty famous, such as Texas’ The Alamo, the site of the famous battle that later garrisoned Mexican and Texan soldiers.

If you want to see the oldest structure of them all — to be more specific, the oldest known wood structure still standing in North America — that would be the Fairbanks House in Dedham, Mass. It was built around 1637 for Jonathan and Grace Fairbanks and their six children and went on to serve as the home for eight generations of the Fairbanks family over the course of almost 300 years.

Check out the full list of the oldest structure in each state here.