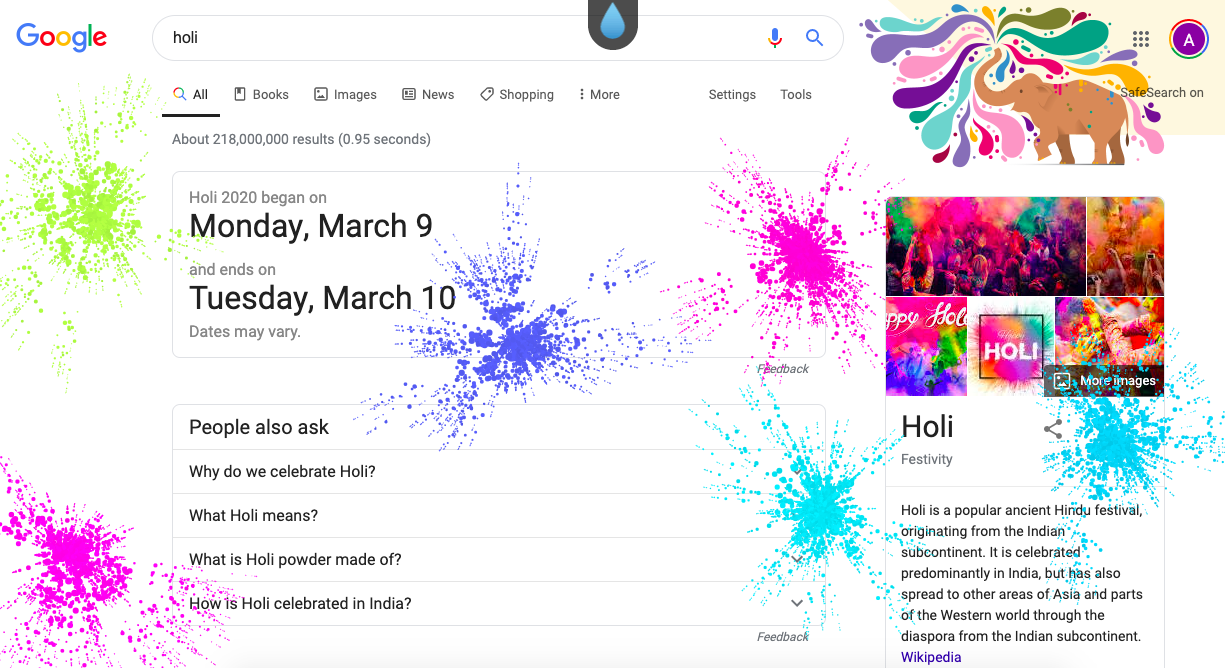 Holi is an ancient Hindu festival that’s being celebrated both in India and in myriad other parts of the world starting today through Tuesday, and one of the things it’s characterized by is an exuberant explosion of color, music, and dance.

You’ve probably seen examples of or allusions to the festival yourself, even if you didn’t realize what you were looking at. Often referred to colloquially as a festival of color, you’ll see participants covered in what looks like brightly colored dust or residue almost from head to toe. Accordingly, Google has added a fun, whimsical easter egg to its search results today in honor of Holi, and we’ll show you how to check it out.

First, do a simple Google Search for “holi.” It can be either on the desktop or web search interface, as well as done with the Google Search app on Android or iOS devices.

In the top right corner, you should see an elephant with bright patterns of color extending from it (as shown in the image at the top of this post). Below the elephant, in the Knowledge Panel that details a variety of facts about the festival, click the bowl of color.

You can probably guess the next step. Then start clicking (or tapping) anywhere on your screen. It will leave a splash of color everywhere you tap, and the color will be different each time. You can cover the entire screen if you want, and if you click the water droplet at the top of the page, it will “wash” your screen and let you start the color-splashing all over.

This easter egg calls to mind similar ones from Google over the past year or so that have included this one celebrating the 80th anniversary of the Wizard of Oz. Another celebrated Avengers: Endgame by letting you finger-snap your Google Search results into oblivion, Thanos-style.

Meanwhile, check out the clip below from National Geographic to learn a little more about the ancient festival itself. According to TIME, poems documenting celebrations of Holi date back to the 4th century, and it makes the start of spring — “symbolic of the triumph of good over evil.” The night before the festival, people light pyres across India to represent the burning of evil spirits, and on the day itself whole towns become washed in splashes of color.