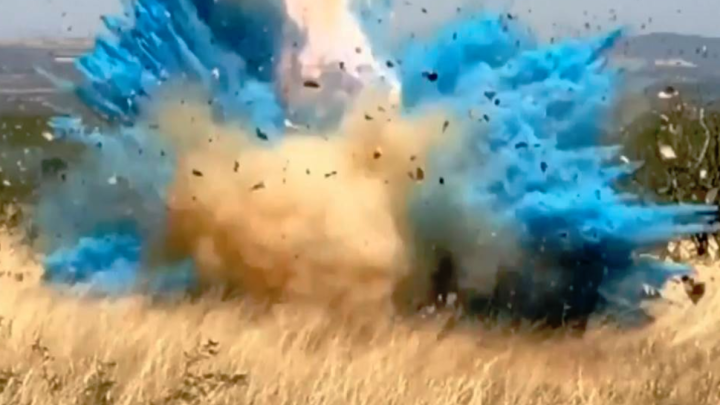 Border Patrol agent and complete moron Dennis Dickey wanted to make a big deal out of the gender reveal of his unborn baby. Naturally, he did what many annoying YouTubers do and tried to one-up all the other expecting parents out there by hosting an over-the-top “gender reveal party” complete with high explosives.

The plan, apparently, was to shoot a target packed with the explosive material tannerite and a bunch of blue powder. When Dickey shot the target it blew up and, as explosive things tend to do, set all the surrounding dry brush on fire. The blaze would go on to burn nearly 47,000 acres of land, including a huge chunk of the Corando National Forest.

This all happened back in April of 2017, but now we have video of the actual incident.

Neat! Dickey got a big explosion and everyone now knows his kid is a boy. Hilariously, the gender reveal also probably ruined a lot of the family’s plans going forward.

He pleaded guilty to some rather mild charges, including starting a fire without a permit, and then negotiated a plea deal that isn’t nearly as devastating to his bank account as his fire was to the forest he destroyed.

To start, Dickey has been slapped with five years of probation, which is pretty lax considering the incredible destruction his little party unleashed. He was also forced to pay an upfront fine of $100,000, along with another $120,000 spread out over the next decade in monthly installments.

All things considered, Dickey got off easy. His fire reportedly cost the state of Arizona nearly $8.2 million, and he’s repaying less than 3 percent of that total.