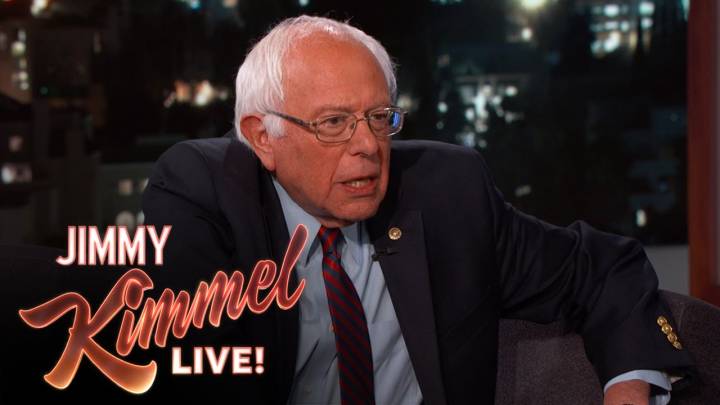 Bernie Sanders and Donald Trump have been flirting around each other like teens at a high school dance. But thanks to Sanders’ appearance on Kimmel last night, we’re finally getting a look at whether this debate is going to happen, and what Sanders thinks it should look like.

In his segment last night, Sanders seemed very into the idea of a debate with Trump — as he should be, of course, given the publicity boost it would give him (not to mention framing him nicely as a presidential contender). Kimmel thinks it could be “one of the highest rated events in television history,” and Sanders wants a venue to match — specifically, “some big football stadium here in California.”

Apparently, Kimmel’s network ABC has already reached out to Sanders to try to make it happen. But the roadblock here is likely to be Trump. Although The Donald said yesterday that he’d “love to debate” Sanders, they’d need to find some way of raising cash for charity in order for Trump to consider it.

Meanwhile, the idea of a debate between Trump and Sanders has offended mainstream Democratic lawmakers, who see it as a publicity stunt. Sen. Joe Manchin, D-West Virginia, told Politico that the possibility of a debate was “bullshit,” and California Senator Dianne Feinstein labelled it as a “publicity ploy.”

They see the race for the Democratic nomination as being over, and Sanders’ continued involvement is just hurting Clinton’s chances in the long run. Of course, with a State Department report hammering Clinton’s use of private emails, and a former senior military adviser saying that Clinton’s disregard for rules caused counter-terrorism ops to fail, things are still very much up in the air.