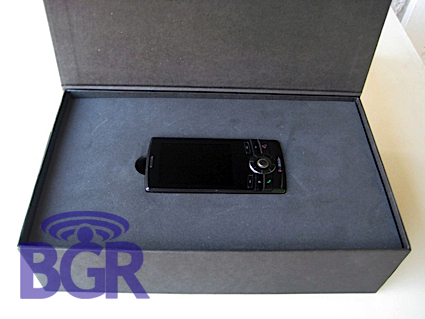 I guess you could sort of say we’re on a roll with the HTC Shadow…We won’t keep you in the dark much longer, though. (Sorry, had to!) Thanks to one of our readers, we just scored some photo snaps of T-Mobile’s Shadow device. It is, in fact, the HTC Juno / HTC Phoebus! He told us that it might actually be a VGA screen as the display is just remarkable. The device is “very glossy”, and you can see the screen in direct sunlight no problem, as well. The button in the middle of the phone is actually a scroll wheel and it also performs the duties of a 4-way navigational pad. He also goes on to tell us that we should inform everyone that while the color choices of brown and sage green sound tacky, they are indeed “very classy and look great.” The sage green device has a light champagne colorization on the front, and the back is a soft-touch rubberized finish in a sage green shade. The brown, is well, sparkly brown. Want to check out the rest of the shots? They’re in our gallery!