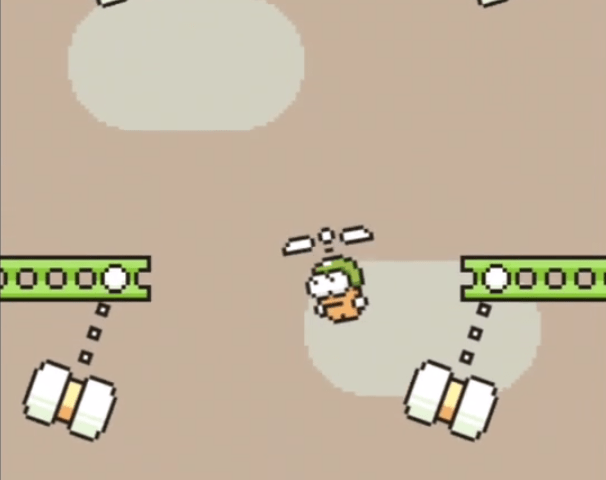 It was only a matter of time before Flappy Bird creator Dong Nguyen unleashed another crappy mobile game onto the world, although there’s no guarantee that he’ll ever score another hit like 2014’s shockingly addictive Flappy Bird. TouchArcade scored some exclusive footage from Nguyen’s new game Swing Copters and you’ll be unsurprised to learn that it looks just as crappy as Flappy Bird did.

The premise of the game is like Flappy Bird, but vertical. You play a guy who has a helicopter propeller strapped to his head and you have to guide him as he flies upward away from steel beams and swinging hammers that are for some reason trying to knock him down. As with Flappy Bird, this game seems like it doesn’t have an end and you’ll just keep playing it until it gets too fast and difficult to navigate. In fact, TouchArcade says the game is even more annoyingly difficult than its predecessor so people who found themselves addicted to Flappy Bird might find Swing Copters just as enticing.

Swing Copters will release on the App Store starting this Thursday, August 21st. It will be free to download if you can tolerate being shown ads and will cost $0.99 if you want to have the ads removed from the game. Be sure to check out footage from this crappy new game below.