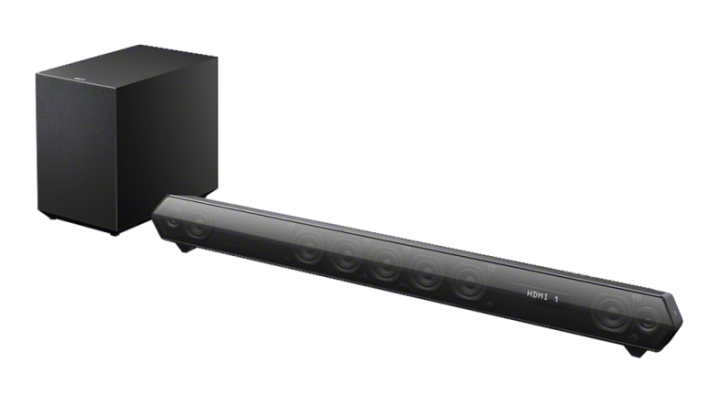 I’ve always considered myself a utilitarian when it comes to my home entertainment center. I don’t need the four-speaker surround sound system, the wall mount or even the nice leather chair — just give me a couch and a television and I’m set. That’s always been my stance and I thought it always would be… until I tried out Sony’s new HT-ST5 sound bar.

Living on a noisy intersection in New York City, it can be next to impossible to hear the television when the traffic picks up. The chain reaction of honks is enough to drown out any audio coming straight from my television, but Sony’s sound bar met the challenge of the Brooklyn-Queens Expressway head-on and won. At a reasonable volume, the bar creates such a full, expansive sound that even the police cars and angry drivers can’t compete with it. This is 7.1 channel surround sound with 380W of power, and it shows.

Although this is Sony’s more affordable model, the designers didn’t skimp on features. It’s chock full of inputs for however many devices you plan on hooking up to it: 3 HDMI in, an HDMI out, a digital audio port and even standard analog in for the old school technophiles.

One of the most important aspects of any device I buy for the living room is the breadth of options contained within. On the HT-ST5, there are seven sound fields, some focusing on the television and others specifically for music: Standard, Movie 1, Movie 2, Music, Game, Football, Clearaudio+. Having used each and every one multiple times over the past week, I can say without a doubt that there are extraordinarily marked differences between all seven options. Adding to the customization of the sound, there are three different voice types to choose from, which affect each sound field differently.

The hardware itself is also about as sleek as any sound bar in its category. Sony’s HT-ST5 could pass for the most expensive sound bar on the market at a glance. (and it certainly doesn’t hurt that it sounds better than almost any other bar in its price range).

Another hugely important feature, especially for those of you who want your sound bar to double as a speaker system, is the Bluetooth functionality. Connecting is as simple as switching to the BT AU (Bluetooth Audio) input and holding down the Pairing button on the top of the sound bar.

The HT-ST5 comes with a killer wireless subwoofer which has been shaking my hardwood floor pretty consistently over the last few days. It really packs a punch if you want it to, but a clever Night Mode feature will cut down on the bass when your neighbors are home.

A small remote also comes packed in, just as low profile as the sound bar it controls. Of course, this being Sony, they couldn’t help but have the remote slide open to reveal nine more buttons for more precise controls within the menus of the sound bar, but everything sounds so crisp to begin with, anyone other than audiophiles won’t need to tinker with the settings to find a sound they like.

If a physical remote isn’t your style, you can use Sony’s iOS and Android-compatible SongPal app to switch between sources, customize settings and more.

If you’ve been looking to turn your quaint living room setup into a competent home theater, Sony’s HT-ST5 should be one of the first items in your shopping cart. The HT-ST5 sound bar will be available in late September for $999.99.