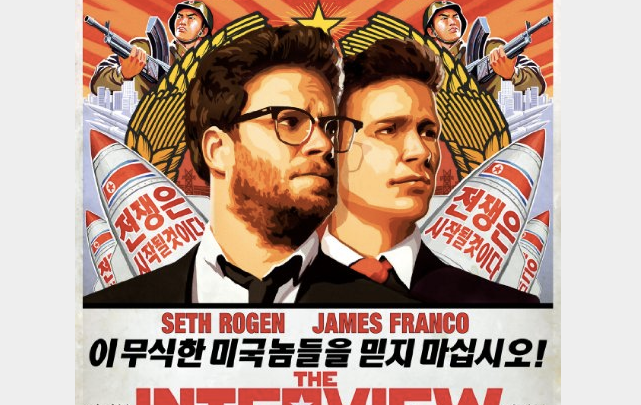 Sony’s The Interview, a comedy in which reporters are hired by the CIA to assassinate the president of North Korea — and which prompted North Korea to react vehemently against it, making it the first suspect behind the recent Sony Pictures hack — will not be showed in several theaters in the U.S. Reuters reports that the New York premiere of the movie has been canceled, following threats from the hackers that hit Sony in late November.

FROM EARLIER: Hack reveals 20 movies Sony will release from now through 2017

The hackers warned moviegoers to stay away from the cinemas showing the movie, suggesting that actual attacks that may physically harm them might be coming.

“We recommend you to keep yourself distant from the places at that time,” the hackers wrote. “(If your house is nearby, you’d better leave.)”

“We will clearly show it to you at the very time and places ‘The Interview’ be shown, including the premiere, how bitter fate those who seek fun in terror should be doomed to,” read a note seen by The Wall Street Journal. “Remember the 11th of September 2001,” the hackers added.

Sony told theater owners that it would not pull the film, but that it won’t object if they decided to cancel it themselves, Reuters adds. Carmike Cinemas, which operates 278 theaters in 41 states told Sony late on Tuesday that it has decided not to show the movie.

The hackers’ threats are already under investigation in New York and in Los Angeles, though officials from the U.S. Department of Homeland Security and another U.S. security official have said that there’s nothing concrete to substantiate the threat yet.

“At this time there is no credible intelligence to indicate an active plot against movie theaters within the United States,” the DHS official revealed.