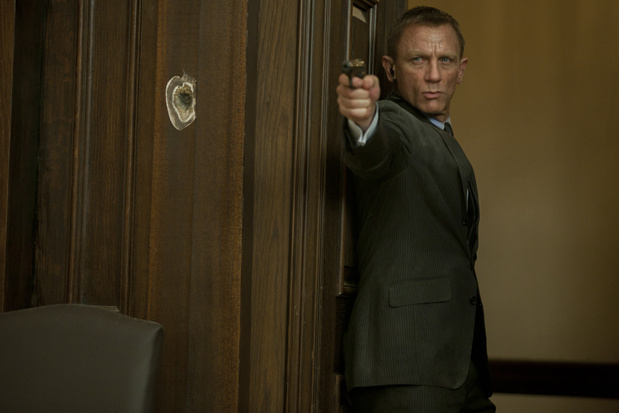 The latest James Bond movie Skyfall finally arrived in U.S. theaters on Friday. Daniel Craig reprises his role as 007 for his third straight Bond movie and unlike in previous movies, he trades in the high-tech gadgetry for rawer mano y mano fights and action sequences filled with explosions that don’t ever feel too over the top. At its core, Skyfall is about both an ex-MI6 agent turned cyber terrorist who wants to kill “M” (Judy Dench) and take down the world with his computer hacking skills, and a Bond that’s out to redeem himself as the best secret agent that ever lived. But underneath all the British sex appeal and cyber warfare plot is a Bond film that is more than just a two-hour long infomercial made to schill Sony (SNE) gadgets and show off rugged Land Rovers. Skyfall is actually watchable because the producers have decided to resist bombarding us with as many product placement gadgets and instead just tell a story.

We live in a world where new smartphones, tablets, computers and TVs are released every week. There’s this invisible urgency to buy the latest and supposedly greatest devices to fulfill our gadget lust. Whereas the last two Bond movies Casino Royale and Quantum of Solace embraced excessive product placement, Skyfall smartly dials down the number of times a logo pops up.

I wanted to like Daniel Craig’s first outing as Bond in Casino Royale, but it was impossible to escape the movie’s marketing motives to feel like it wasn’t a two-hour long advertisement for Sony gadgets where 007 and his co-stars mindlessly “used” Sony Ericsson smartphones, VAIO laptops and Cyber-shot cameras.

Skyfall works in product placement into each scene just short enough for you to not even notice them, unless you were deliberately looking for them.

As a viewer burned by Casino Royale and Quantum of Solace, I went into the press preview of Skyfall actually searching for the product placements, given how much marketing was put into hyping up Bond’s special Xperia TL smartphone and the fact that he now drinks (shudder) Heineken.

I was impressed to find the Xperia TL barely having more than a single brief scene, while Sony’s monolithic-designed Bravia HDTVs and VAIO laptops nicely blended into their settings. Never does it feel like my eyes were processing too much “Sony.” Sometimes I had to squint a little just to confirm if a certain framed shot was actually showing a less obtrusive and slightly darkened Sony logo (it was).

While there’s plenty of advertorial plugs in Skyfall including Land Rovers and Aston Martins, Volkswagen Buggies and Omega watches, to name a few, Bond’s latest outing is also a gentle reminder that we needn’t focus so much on gadget obsolescence.

Bond himself doesn’t have any fancy UMPC or Cyber-shot cameras like he did in Casino Royale and Quantum of Solace. The new “Q” played by Ben Whishaw gives him only two gadgets: a Walther PPK/S 9mm short pistol with embedded finger-print scanner and a tiny elementary radio tracker. But his ability to use them both so effectively to take down cyber terrorist Raoul Silva (played by Javier Bardem) instead of requesting something more tricked out made me ponder the pace at which we replace our gadgets.

Personally, when I make a gadget purchasing decision, I don’t put its price as the first deciding factor; I opt for value. Do I really need to buy an iPad mini or iPad 4 when I have a perfectly capable iPad 3? What about getting a new computer? Did I really squeeze my 2011 MacBook Air for everything its worth to justify a new 13-inch MacBook Pro with Retina display? In both cases, I didn’t upgrade because I knew it was just my “wants” outweighing my actual “needs.” My slightly older, but still very capable gadgets still work great and with a few software tweaks and the right apps, they can keep going until they physically break.

Surely, Bond could afford to have as much high-tech gear as he wants, but the fact that he sticks to an old radio tracker that he initially scoffs at, but ultimately finds a perfect use for is telling that today’s fast-paced gadget upgrade cycle has caused these inanimate pieces of silicon and metals to have no timeless value.

The appeal to Bond and his world is that his watch, his Aston Martin DB5 and even his drink is as sleek, smooth and classy as it was 50 years ago. Why can’t a smartphone or tablet age gracefully? The original iPad was faster than anything on the market and with each new revision, it only got faster, but is the first-gen tablet still a damn good reader, Internet browser and photo viewer? For 95% of the population who don’t give a hoot about Retina displays and quad-core graphics and RAM: absolutely.

Skyfall is a return to greatness and quality. Director Sam Mendes’ Skyfall is a delight because it’s not a gadget smorgasbord. Mendes deliberately doesn’t equip Bond with every Sony gadget coming out to push back against the tech marketing. Skyfall focuses on having good storytelling with believable characters that often never places gadgetry as the be-all to saving the world. The secret to a good Bond movie is knowing how to balance the amount of gadgets that appear and Skyfall does it so well it’ll have you hooked all the way through.