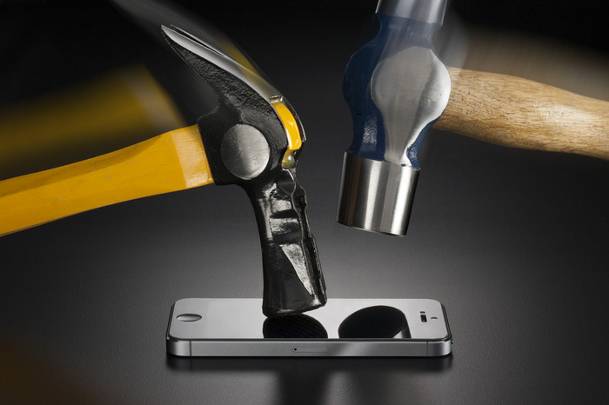 Dropping a phone is a tragedy. An investment worth several hundreds of dollars can shatter in an instant, even when equipped with a sturdy case — so Evolutive Labs wants to make your smartphone nearly indestructible with the Rhino Shield. The Rhino Shield is a screen protector that aims to keep your iPhone or Android smartphone safe from impacts, scratches, water and even fingerprints while also remaining practically unnoticeable on the phone’s surface.

Rhino Shield was successfully funded on Kickstarter back in March, and I imagine it was thanks in no small part to the fascinating drop test video that accompanied the fundraising campaign. In the video, the creators bash on Rhino Shield-equipped iPhones (one of several smartphones and tablets the screen protector supports) with dangerous objects such as a knife, a hammer, a cup full of nails and a 255 gram steel ball. Rhino Shield handily withstood every test.

I have been using my iPhone 5 with the Rhino Shield for about a week now, and the best compliment I can give the accessory is that I had nearly forgotten it was covering my screen. After installing the Rhino Shield and replacing my case, I haven’t once had any trouble using the touchscreen or fighting off annoying bubbles. I also find that it resists oils and smudging just as well as the standard oleophobic coating on Apple’s iPhone.

I’ll also admit that the videos inspired me to take a hammer to my phone — though much less vigorously than the Evolutive Labs guys — and it didn’t leave a mark.

I’ve never had a screen protector before, but the Rhino Shield has turned me around considering how unobtrusive it can be. It fits in my case, it fended off a hammer attack, and at just 0.029 centimeters thick, I can hardly tell it’s there.