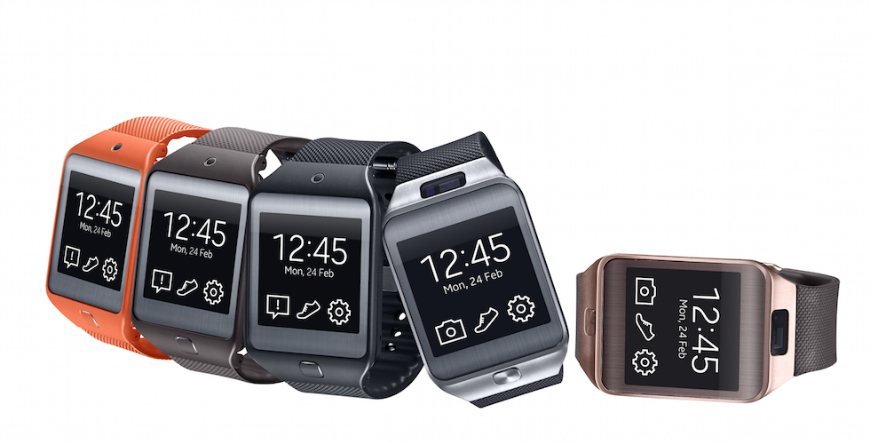 Almost six months after launching its Android-based Galaxy Gear smartwatch, Samsung is ready to start flooding the market with more smartwatch models that are an extension of the Gear family. Two days before its Galaxy S5 announcement, Samsung has unveiled the Gear 2 and Gear 2 Neo, two new smartwatch models that resemble the Galaxy Gear – confirming recent leaks – although they’re very different from the original smartwatch.

For starters, the new Gears do not run Android. Instead, they have Samsung’s Tizen OS on board. That also means they have been removed from the Galaxy line of products, which all run Android. Furthermore, instead of announcing a single new smartwatch model, Samsung seems to be getting ready to address various price points by releasing both a Gear 2 and a Gear 2 Neo model, with the latter supposedly being the more affordable version.

When it comes to specs, both the Gear 2 and the Gear 2 Neo are very similar, although the latter does not have a camera – the Gear 2 packs a 2-megapixel camera with HD video recording. Both smartwatches have a 1.64-inch Super AMOLED display with 320 x 320 resolution, a 1.0GHz dual-core processor, 512MB of RAM, 4GB of storage, a 300 mAh battery and the Tizen OS.

Each new smartwatche will offer various fitness- and health-related features including a heart rate sensor, pedometer, sleep and stress measurements, and special modes for various exercises including running, walking, cycling or hiking. The Gear 2 and Gear 2 Neo will also pack some of the same features as their predecessor, including support for calls, notifications, and other apps. Desipite running Tizen, both devices will be compatible with “more than dozens of Samsung Galaxy smartphones at launch,” according to the company.

The devices will also offer a music player with Bluetooth Headset and speaker support and a WatchON app that can turn the device into a remote control for various devices.

The new smartwatches will be released “around the world” starting in April, although specific launch details and actual prices aren’t available at this time.

More images for the Gear 2 and Gear 2 Neo and the official press release follow below.

“Samsung continues to lead innovation in the wearable market by creating devices that are completely integrated into the lives of consumers through extended connectivity features, stylish customization options and a robust application ecosystem,” Said JK Shin, CEO and President of IT & Mobile Division, Samsung Electronics. “With the Samsung Gear 2 and Gear 2 Neo, we have enhanced everything consumers love about the Gear to offer unparalleled smart freedom in their everyday life.”

The next generation of mobile freedom
Samsung achieved a significant improvement as a leading smart wearable provider with Samsung Gear 2 and Gear 2 Neo. Both devices offer a lightweight design with premium finishes that reflect modern trends.

A Camera is equipped to a main body instead to strap, making the Samsung Gear 2 a sleek and sharp smart companion. Consumers are now available to express their mood or coordinate with their outfit with modern and sophisticated strap color options including Charcoal Black, Gold Brown and Wild Orange for Gear2 and Charcoal Black, Mocha Grey and Wild Orange for Gear2 Neo. The home screen background, clock face and font are also customizable to reflect their personal taste.

The Gear 2 and Gear 2 Neo are essential companion devices, allow users to accept or ignore incoming calls and messages, and providing instant notification options based on a user’s activity and habits.

Both devices act as an extension of a consumer’s daily life, offering users more control of their lives with standalone features, such as controlling electronic products such as TV, settop box through WatchON Remote application in their own home with an embedded IrLED sensor. The addition of a standalone music player with Bluetooth headset means people can leave their smartphone at home and still enjoy their music on the go.
Both devices also offer personal fitness coaching in real time, allowing users to develop a customizable fitness routine and monitor their heart rate in order to improve their overall well-being.