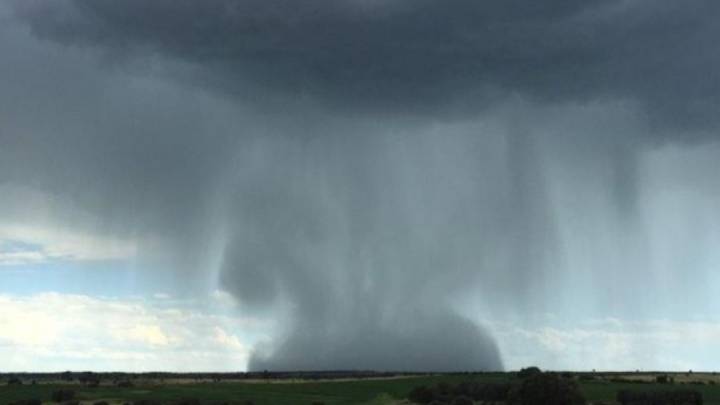 The U.S. may have had to deal with a frightening blizzard scare in the Northeast, but that’s not the only kind of weather phenomenon that can be rather terrifying. To prove that point, ABC Australia posted a video showing several “rain bombs” as captured with help of an iPhone by a grazier in Queensland’s southern inland.

FROM EARLIER: Video: Awesome school principal announces a snow day with his own special version of ‘Let It Go’

This particular type of rain fall looks like a bomb, or a water ball falling from the sky, and it can be destructive for everything underneath it.

“I was just out on the tractor on a high point watching the rain come and wondering when I saw it,” Peter Thompson said. “I reckon from when I first started seeing that ball form to when it hit the ground was about two minutes. The drop itself was really quite quickly. It looked like the bottom of the cloud falling.”

The Bureau of Meteorology said the rain bomb was some sort of downburst that’s usually referred to as a microburst.

“A downburst is a concentrated downdraft, typically lasting five to 15 minutes, and is of unusually high-speed such that it can cause damage on, or near, the ground,” the bureau’s site reads. “The term microburst is used to describe a downburst which causes damage over an area with horizontal dimensions of less than four kilometers.”

The video showing these rain bombs in action follows below.