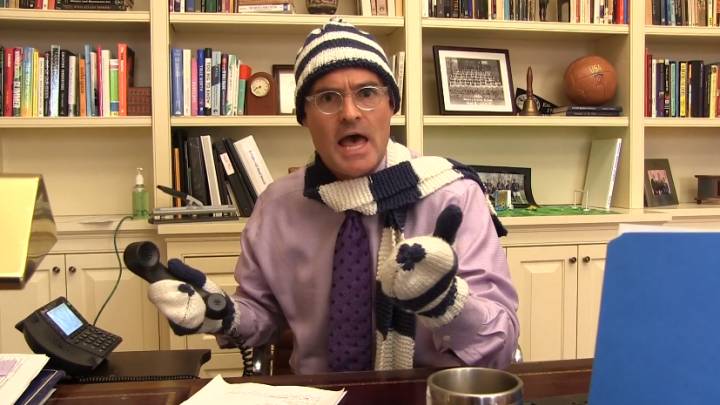 Many schools have been closed following blizzard warnings, but we doubt any of those schools announced snow days quite like this.  Moses Brown director of communications and community engagement Adam Olenn suggested the school should do something special for cancelling school this week, and the principal was apparently eager to accommodate his wild plan.

FROM EARLIER: Not all cops are bad, this one’s dancing to Taylor Swift in a cop car

Moses Brown posted on YouTube a funny School Is Closed video that’s actually a Let It Go cover that many kids will certainly appreciate.

“I’ve seen a couple of funny principal snow day closings and I thought we could really crush that,” Olenn told WBUR. “Of course, with two little girls,” Olenn says, “I’ve heard Let It Go from Frozen more than a couple times.”

“I sat down and wrote it in like 15 minutes,” Olenn added. “I do like the fact that I was able to work in the fractals bit that was in the original song.”

The school’s principal, Matt Glendinning, isn’t actually singing in the video. The school prepared for the storm for more than a week, recording and editing the material as they waited for the perfect storm to hit.

The hilarious “School Is Closed” video announcement follows below.