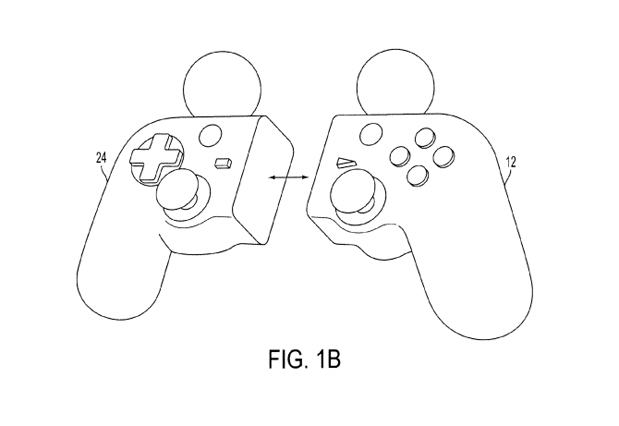 While Nintendo (NTDOY) has been busy innovating with unique controllers on the Wii and Wii U, Sony’s (SNE) DualShock controller for its PlayStation, PlayStation 2 and PlayStation 3 has remained virtually the same since 1997. A newly discovered patent reveals Sony might be planning on a radical overhaul of the DualShock for the PlayStation 4 that’s rumored to arrive next year. U.S. patent 20120302347A1 details a “hybrid separable motion controller” that resembles a DualShock controller with two PlayStation Move sensor balls attached to it. Much like how the Wii Remote and Nunchuk controller combo separated the left and right hand input, the Sony controller patent goes one step further by allowing the two halves to be split and combined at any time – all without reducing the amount of buttons available.

One of the PlayStation Move’s biggest disadvantages is that it’s a separate controller and not the default one. As a result, most developers either saw it as merely a Wii Remote clone or as a niche controller with a limited install base not worth programming special controls for. If Sony were to include proper 1:1 motion controls within the default PS4 controller without turning its back on the “core” controller, it could greatly appeal to casual and core gamers.

Such a controller can be considered a natural evolution of the current DualShock 3 controller that sports limited motion controls using its three-axis accelerometer and gyroscope.

Of course, the controller is only a patent that may never make it to market, so don’t get your hopes up if it doesn’t happen.