By Todd Haselton
Updated 4 years ago 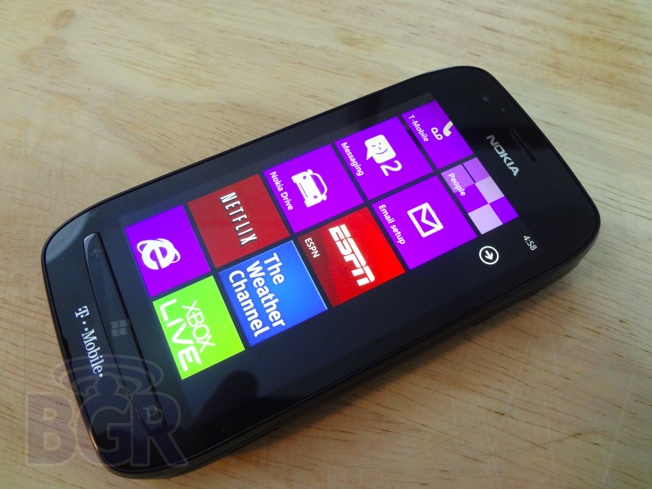 Nokia proved it was back in the smartphone game when it launched the Lumia 800 last year. But can its Lumia 710 gain the attention of U.S. consumers? Many would argue that Nokia should have decided to launch the Lumia 800 to make a bigger splash in a market that has long forgotten the Finnish smartphone maker. But the Lumia 710 is affordable — it only costs $50 with a new two-year contract — and it’s also powerful. It’s not as feature-rich as the Lumia 800, but can it still compete with other smartphones in its price range? My full review follows after the break.

The Lumia 710 looks and feels like a decent device. The back cover is plastic but it has a nice soft-touch rubber feel and the entire face is glossy black, although a white version is also available from T-Mobile. There are three hardware buttons below the phone’s 3.7-inch display, which actually isn’t that impressive. While the curved glass AMOLED ClearBlack display on the Lumia 800 was very impressive, the standard ClearBlack display on T-Mobile’s Lumia 710 is not. Colors are washed out and the brightness is not where it needs to be, but this was likely required in order to keep the cost of the phone down.

The volume controls and a camera quick-launch key are in easy reach on the right side of the phone and there is a power button, a microUSB port and a 3.5mm headphone jack on the top of the device. The back is home to a 5-megapixel camera and a single LED flash.

Under its hood, the Lumia 710 is powered by a 1.4GHz Qualcomm Snapdragon processor and is equipped with 512MB of RAM, a 1,300 mAh battery and 8GB of storage. As is typical with other Windows Phone 7.5 devices, you can’t add more storage using a microSD card, which is unfortunate if you’re like me and prefer a phone with a bit more memory.

Like the iPhone 4S and the Lumia 800, the Lumia 710 uses a microSIM card that pops in under the battery as opposed to on the top of the device, as it does on the Lumia 800.

While it’s far from a deal-breaker, the most upsetting point about the hardware is that T-Mobile decided not to offer the device in the various colors that are available on international carriers. I think Nokia really could have turned heads if it launched a yellow, pink, green or blue Lumia 710 in the United States, but instead the Lumia 710 will sit camouflaged on store shelves next to other black and white smartphones.

The Lumia 710 runs Windows Phone 7.5 (Mango), Microsoft’s latest mobile operating system. I wrote about Windows Phone 7.5 in great detail in September when it launched, so we’ll stick to discussing what Nokia has done to the phone.

Nokia, unlike other manufacturers, has an agreement with Microsoft that allows it to customize the phone in a number of ways. You won’t find anything intrusive, but Nokia did add its own free GPS navigation software and its own Nokia Maps application, which I like better than Bing Maps. It’s not incredibly accurate, however. A search by name for a bar a block away from me didn’t turn up any results, for example.

As I said in my aforementioned overview of Windows Phone 7.5, I really, really love the Windows Phone 7.5 operating system. It’s one of the cleanest and most intuitive mobile operating systems on the market today, and for that reason it should be a top choice for first-time smartphone buyers or anyone who wants the functionality of a smartphone without complicated menus or settings.

I love the live tiles on the home screen as well, specifically how foursquare shows the leaderboard and how my avatar jumps around the Xbox Live tile. I also enjoy the fluidity and speed of the entire OS. My biggest gripe overall is that there’s a lack of applications for Windows Phone right now, but the Windows Phone Marketplace is growing every day and recently just surpassed the 50,000-app milestone.

The Lumia 710 packs a 5-megapixel camera and it’s not the greatest sensor I’ve used. The pictures were mediocre at best and not near as good as the shots we snapped with the Lumia 800, which has an 8-megapixel camera with Carl Zeiss optics. The camera is capable of recording 720p HD video and it was satisfactory. There was a bit of blurriness from time to time, but otherwise it was OK. The device also lacks a front-facing camera for video chat, which is supported on other Windows Phone 7.5 phones such as the Samsung Focus S, Samsung Focus Flash and HTC Titan.

The Lumia 710 supports T-Mobile’s 14.4Mbps HSPA+ “4G” network in the United States. Data speeds were decent in New York City, but they were nothing compared to AT&T or Verizon’s 4G LTE networks. Using the http://dslreports.com/mspeed speed test, my download speeds averaged between 1.1 Mbps and 1.26 Mbps with the device reporting a full signal. That’s on a par with most 3G networks.

Calls placed on the Lumia 710 were pretty solid in New York City. I wasn’t blown away by the call quality, but I didn’t have any real problems with it either. The speakers were satisfactory during a phone call with the speakerphone turned on, but my caller could easily tell when I was using speakerphone.

Windows Phone 7.5 has been praised for its solid battery life in the past and the Lumia 710 wasn’t an exception. It’s equipped with a 1,300 mAh battery, which is a bit smaller than the 1,450 mAh battery inside the Lumia 800, but it lasted two full days with moderate usage and was able to idle for many more. Overall, I’m impressed with the battery life and think it’s better than most smartphones on the market today.

The Lumia 710 isn’t as exciting as its big brother, the Lumia 800. Nokia announced a flagship device that is, in many ways, a game changer for the company moving forward. And yet even still, T-Mobile decided to launch the company’s lower end device, which surely won’t turn as many heads. Worse, it decided to launch the phone without a wide color selection that could have made the device stand out more in public. It just seems like Nokia and T-Mobile missed an opportunity to really hit the U.S. market with a bang, but perhaps Verizon Wireless or AT&T will do that with Nokia’s expected 4G LTE device.

No, there’s nothing inherently wrong with the Lumia 710. It offers decent battery life, fair data speeds and a really solid hardware design. In fact, even its letdowns are justified by its affordable $50 price point, and the Lumia 710 is absolutely not aimed at seasoned smartphone users. Instead, this phone is aimed squarely at feature phone users that T-Mobile hopes to turn into smartphone owners. The handset is reliable and easy-to-use, and I highly recommend the Lumia 710 to first-time smartphone buyers.