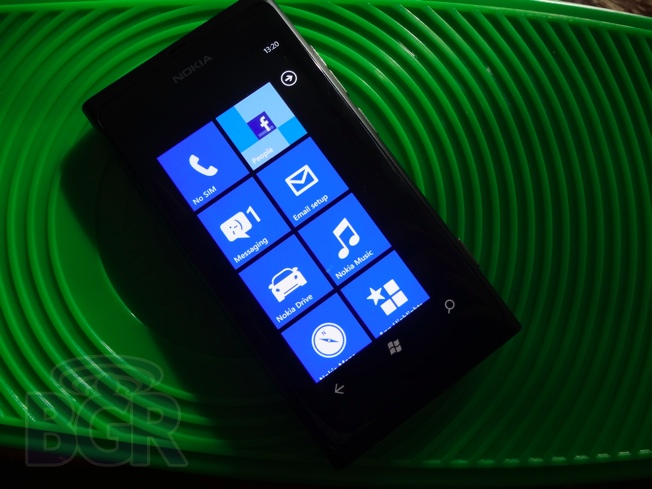 Nokia once had a big stake in the U.S. smartphone market. I remember being jealous in high school that I couldn’t tell anyone my Snake high score because I carried a Motorola phone. I seemed to be the only kid without a Nokia device so, when I went to college, I picked up the Nokia 6010. I was drawn to the color screen and interchangeable face plates, and I carried it through all four years of college, preferring its durability to the Motorola RAZR that all of my friends had bought. The iPhone was announced in 2007 and, seemingly almost overnight, Nokia was completely gone from the hands of U.S. wireless subscribers. Sure, there were a few flip phones from Verizon Wireless over the years and a handful of Symbian devices from AT&T and T-Mobile, but none of those phones had the power to bring Nokia back into the spotlight. The Lumia 800 does. It isn’t just a phone, it symbolizes Nokia’s efforts to re-enter the global wireless market with a unique point of view and a fresh portfolio. It’s not available here in the U.S. yet, but a variant almost certainly will be early next year. Does the Lumia 800 push boundaries? Is it the best Windows Phone out there? Are the hardware and software married so perfectly that the competition might be looking on with envy? My full review follows below.

Not since the Galaxy S II have I been so excited for the FedEx person to buzz my apartment and drop off a new review unit. There was a ton of hype coming out of Nokia World surrounding the Nokia Lumia 800; it is Nokia’s flagship Windows Phone for 2011 and we loved it during our initial hands-on. Plus, I was secretly hoping that I’d receive a cyan-colored review unit. As luck would have it though, I received a matte black one.

The Lumia 800 has a beautiful face, just like the N9, and it feels heavy and solid in the hand. I love its contoured screen, which looks almost like lacquer was poured into a basin and left to harden with a nice, curved, top. The ClearBlack AMOLED screen is bright and colorful, but side by side with the Samsung Focus Flash I found myself preferring Samsung’s more vibrant Super AMOLED screen, which also had brighter whites.

The buttons on the right side of the phone for volume up/down, power and the camera appear to be faux chrome plastic and, while I like the soft finish, the back is simple and a bit boring save for its 8-megapixel camera. There’s a small metal piece surrounding the camera that identifies the Carl Zeiss lens, but I wish the back had etching, more accents or anything that really screamed “I’m a Nokia flagship phone!” Plus, it really attracts fingerprints and my Lumia 800 often looked grimy.

Nokia included a plastic hatch for the microUSB port and a second hatch for a microSIM card slot. You have to open the microUSB port to access the microSIM and if you close the microSIM before the microUSB, the two get caught and you’ll need a paper clip to re-open them. I like that the hatch hides the ugly ports, but it was also a bit annoying considering that I frequently hook my phones up to a computer for charging or file transfers.

I usually keep all of my videos and photos on a single microSD card that I move from phone to phone. Most of the latest Windows Phone 7.5 devices lack a microSD port though, which is frustrating. It’s not the Lumia 800’s fault, though, so I won’t harp on it too much.

Nokia recently adopted Microsoft’s Windows Phone 7.5 (Mango) operating system just like a number of other manufacturers, including LG, HTC and Samsung to name a few. However, it differentiates itself by adding a few of its own applications that truly add value to the phone. There’s Nokia Maps, Nokia Music and Nokia Drive for turn-by-turn directions installed out of the box.

First, a bit of background: If you’re unfamiliar with Windows Phone, it offers one of the most intuitive user interfaces available on a mobile phone today. The home screen is populated with a number of tiles that can be customized and that can present “live” information, if a developer so pleases. A swipe to the left reveals a full menu of all the applications installed on your phone.

Microsoft maintains a tight ship when it comes to customizations, so there aren’t different user interfaces to get used to, as is the case with Android. Microsoft does allow Nokia certain liberties with its devices, but the Finnish vendor has not strayed strayed much thus far. So in terms of software, the only differentiation on the Lumia 800 is the free navigation, music store and mapping applications.

A few years back before we all had Google Maps or Bing or any other mapping software on our smartphones, there was Nokia Maps. OK, there was BlackBerry Maps, too, but it wasn’t nearly as powerful. Nokia Maps was beautiful and it worked well. Today, it still works quite well, although I prefer the cleaner user interface in Google Maps. A search for “bar” near my apartment in New York revealed several nearby pubs, but failed to locate a bar just a block away that has existed for the past several years. Zooming is fluid, however, and there are several views available including a satellite image option. Overall, I preferred to use it over Bing, which never seems to find what I’m looking for.

Unlike most Windows Phones, the Lumia 800 provides two options for purchasing new music out of the box: Microsoft’s default Zune Marketplace and its own Nokia Music store. Nokia Music allows you to access your music, purchase songs, find local “gigs” and more. The shop also lists top songs, a welcome feature that is lacking in Microsoft’s own Marketplace.

I live in New York City and don’t own a car, but I enjoyed Nokia Drive for what it’s worth. The software provides free turn-by-turn directions and allows you to download street maps by continent, country and state. I downloaded a 102MB New York map in a few minutes and it’s just as easy to add more, should you be preparing for a trip. There are also tons of different voice options. The UI isn’t too crowded and there are both 2D and 3D map modes. I won’t know how well Nokia Drive stacks up to Google Navigation, my current favorite GPS client, until I have to drive out of the city but it’s definitely a solid free application that other Windows Phone devices don’t have right now.

Call quality with the Lumia 800 was pretty run of the mill; the audio quality hardly knocked my socks off, but I didn’t experience any major issues, either. The Lumia 800 supports AT&T’s 3G network in the United States and, using http://dslreports.com/mspeed as a speed test benchmark, I averaged around 700Kbps using an AT&T SIM card. That’s pretty awful, considering most of AT&T’s own 3G smartphones easily exceed 1Mbps.

The phone comes with its own headset with a built-in microphone. It works perfectly fine during phone calls, but the team here at BGR discovered a weird issue thanks to a tip from a friend of the site: if you connect the original Nokia headset and place a call, it works just fine. You can then use any third-party headset with a microphone as you wish. However, if you try to use a third-party headset from the get-go, or before you use Nokia’s headset, it won’t work. So basically, as it stands, you can really only use Nokia’s headset unless you opt for a Bluetooth headset.

I’ve always looked forward to using the Carl Zeiss cameras on high-end Nokia phones, but I wasn’t blown away by the quality of the pictures taken with the Lumia 800. They offered a sharper picture, had a warmer white balance and were more colorful than those shot with my iPhone 4, but not by much. As I’ve said in other recent reviews, I recently bought a relatively budget-friendly point and shoot and it still blows away any smartphone I’ve used. While other reviewers may make arguments that it’s time to leave the point and shoot at home, I disagree.

The Nokia Lumia 800 video automatically defaults to shooting in a VGA resolution, but there’s also a 720p HD video option. 720p HD video shot in my apartment wasn’t that amazing. The camera is slow at adjusting to to new lighting and its auto-focus is just as sluggish. Unlike many Android smartphones, the Lumia 800 doesn’t offer an HDMI port, so you can’t hook it up to your HDTV to watch videos. The only way to get content off of the phone is to either send it over a Wi-Fi or 3G network, which isn’t really optimal with a large HD video, or connect it up to a computer with Microsoft’s Zune client installed. I really, really, wish it had a microSD card for this purpose.

Windows Phone devices typically offer above-average battery life and the Lumia 800 proved no different. I was easily able to milk a full day’s worth of battery life from the Nokia Lumia 800’s 1,450 mAh battery. Users can’t access the battery, however, so you might run into some issues if you ever run have a problem that would normally require a battery pull. The first review unit I got was a bit buggy and a battery pull might have helped in a few cases, but I had to perform a hard reset on the phone instead and eventually I had to request a new unit from Nokia. This was apparently an isolated software issue though, and I don’t think it will impact launch units.

As I said at the beginning of this review, I couldn’t wait for the Lumia 800 to arrive so that I could finally see just how well Nokia was able to marry Windows Phone 7.5, an operating system I already love, with the Finnish phone maker’s incredible hardware. I like the AMOLED display, but it doesn’t blow me away like the Super AMOLED Plus screens on Samsung’s devices. I’m not a huge fan of the polycorbonate build (it feels like any other plastic to me) and think there are definitely some weak hardware design points, such as the microUSB and miniSIM card hatch. I know I’m alone here, though, as there are tons of people who love the hardware design.

On the software side, the phone is fantastic. I prefer Nokia Maps to Bing, which I’ve personally told Microsoft just never works well for what I need a mapping app for. Windows Phone 7.5 is beautiful and efficient, it just needs more great apps. And while the Lumia 800 camera didn’t blow me away like I was hoping it would, it was satisfactory and better than the camera my iPhone 4.

The Lumia 800 left a lot to be desired in the data throughput department, but rumor has it Nokia is working with AT&T on a 4G LTE device that could be unveiled during CES in January. For now, I think most U.S. Windows Phone lovers should check out the HTC Titan, the Samsung Focus S or the Samsung Focus Flash, which will be much more affordable with a subsidy. If price doesn’t concern you, however, the Lumia 800 should be at the top of that list. The day Nokia launches a Windows Phone on a U.S. carrier with faster data, an aluminum body, and perhaps a few color choices, I’ll no doubt be impatiently waiting for my FedEx delivery person all over again.