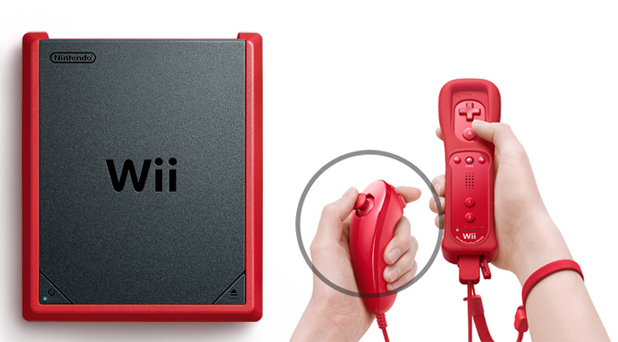 The latest trend in the tech world these days seems to be to shrink down old hardware and tack on a “Mini” to it. Nintendo (NTDOY) announced on Tuesday a redesigned Wii Mini that’s more compact for $99.99. The rumor nailed the December 7th launch date, but didn’t report that the Wii Mini is a Canada-exclusive console that lacks Internet connectivity and is “designed exclusively to play Wii games,” which means GameCube compatibility isn’t making a return.

The Wii Mini will be available in “matte black with a red border” and will include one red-colored Wii Remote Plus, a matching Nunchuk, the IR sensor bar and requisite composite cable and power adapter.

As we’ve said before, the Wii Mini is not meant to compete directly with the newly launched Wii U, but to give Nintendo a two-pronged attack at the consumer looking for a cheap entry-level console and one who is ready to graduate from the Wii’s waggle.

NINTENDO INTRODUCES NEW Wii MINI THAT’S ALL ABOUT THE GAMES

With a New Look, $99.99 Wii Mini Offers an Amazing Value for the Holidays

After nearly 100 million sold worldwide, Nintendo’s Wii console is getting a new look and a new price. On Dec. 7, the new Wii Mini home console launches in Canada at a suggested retail price of just $99.99 and puts the focus squarely on Wii games. The system can play more than 1,400 disc-based Wii games. Wii Mini is smaller than the original Wii system, and comes in matte black with a red border. The system comes with a red Wii Remote Plus, a red Nunchuk controller and works with most Wii accessories.

“There are games in the Wii library for every type of player,” said Ron Bertram, Nintendo of Canada’s vice president and general manager. “Wii Mini is a great gift for the holidays that brings everyone in the family together to play. Wii Mini has a mini price, but it’s all about big fun.”

Wii Mini is designed exclusively to play Wii games. Its family-friendly design has no Internet capabilities and does not play Nintendo GameCube games. It’s a great value for first-time Wii owners who just want to jump in and experience all the great Wii games that helped usher in a revolution in motion-controlled gaming. Wii games are available at a variety of price points for every kind of shopper. Some top Wii games during the past six years include:

• A whole range of value-priced Nintendo Selects games, including some of the top-selling and best-reviewed Wii games of all time, at a suggested retail price of $19.99

• Wii Fit Plus with the Wii Balance Board (suggested retail price of $99.99)

Wii Mini is available exclusively in Canada during the holiday season. No information is available about its potential availability in other territories in the future. Remember that Wii Mini features parental controls that let adults manage the content their children can access. For more information about this and other features, visitnintendo.com/wiimini.