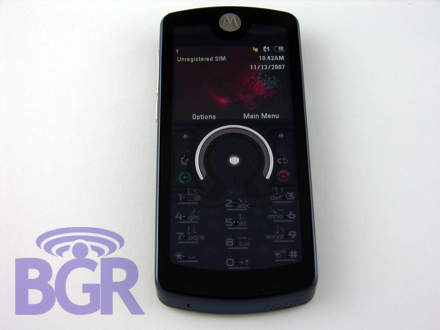 What’s that you hear? The sound of another exclusive, here at BGR? Mm hmm. The Motorola ROKR E8 has often been referred to as the “morphing phone,” and why shouldn’t it? The keyboard actually changes based on what function of the phone you wish to use. When you’re making a call at the home screen, you’d obviously want the full keyboard there. When you’re about to snap a flick, you get zoom in and out keys, a playback key for viewing recently taken photos, and a video camera key for switching to video mode. In music mode, the keyboard displays next and previous keys, a play / pause key, a shuffle playback key, and a repeat key. The actual device is pretty sharp, too. The entire front is like one smooth surface with a huge touch-sensitive “ROKR” (scroll) wheel in the middle. What’s incredible, is that there is absolutely no tactile feedback on any of the keys when the phone is off. It’s just a flat surface with little dots to help guide your fingers. But when it’s on, haptics lends support when you’re pressing a button, but it actually makes the keys press. Hard to explain, but there is definitely tactile feedback on a key press and not just the normal haptics vibrate. As far as we can tell, the Motorola E8 features a 2 megapixel camera, Bluetooth (with various profiles including A2DP), and is a quad-band GSM/EDGE device. You’ll also notice a 3.5mm headset jack at the top of the phone, which is a little awkwardly placed if you ask us. The Motorola E8 runs a newer version of the MOTOMAGX platform, so Motorola RAZR 2 V8 users will have no problem getting used to the new handset. We’re trying to track down a release date now, and we have no word on what carriers here in the U.S. will be jumping aboard to carry it at this point. All in all, it’s not going to take over the world, but with its thin and sleek profile complete with a unique keyboard and excellent call quality, we could see ourselves using this every day.

Click on over to our Motorola ROKR E8: hands on gallery!