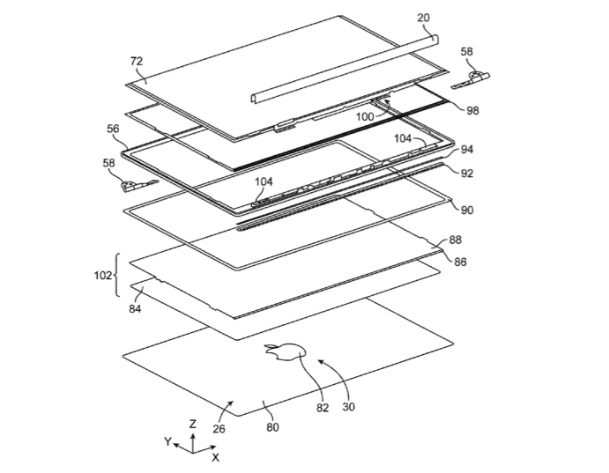 Apple on Tuesday was awarded a new patent titled “Electronic device display module” that describes a MacBook laptop that would have solar charging abilities as well a secondary, touch-friendly display, AppleInsider reports. Interestingly, the secondary display would be placed on the rear side of the laptop’s main screen, and would offer users access to touch controls, while also housing the device’s solar panels and the company’s iconic logo found on all Mac models.

The two-sided display may be built using a combination of materials including metal, ceramic, fiber composites and glass. Electrochromic glass may be used in order to allow light to pass through the rear display, but also to display a logo, a small LCD display and capacitive sensors for touch input. The display could include additional sensors including optical and acoustic, and the combined array would let the users perform various actions such as unlocking a magnetic latch mechanism, control media and other software on the laptop.

The rear glass may be translucent or transparent, with the latter option allowing the light to pass through and reach photo voltaic cells that may be placed between the two screens for solar battery charging needs.

While the existence of this patent doesn’t guarantee that future MacBook models will offer such features, it further proves Apple’s growing interest in solar power use. The company has many other patents describing ways of charging computers and mobile devices in such a manner, with an analyst expecting future iPhones to pack a sapphire glass display that would include photovoltaic cells.

Furthermore, Apple has increased the battery life of its MacBook laptops from generation to generation by using less power-hungry components and optimizing the Mac’s operating system.