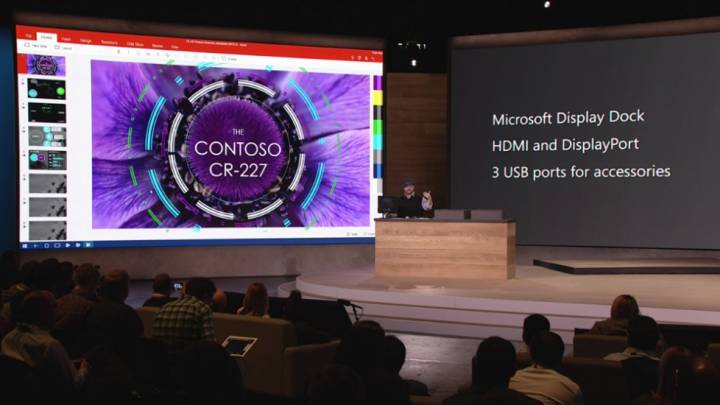 Microsoft is a distant third player in the mobile business, trailing behind Google and Apple both when it comes to market share and profits, but the company just showed it’s not ready to throw in the towel. Microsoft announced on Tuesday a series of flagship devices that are supposed to take on the iPhone 6s and Nexus 5X that have some impressive characteristics.

But most importantly, they come with a feature that no competitor can offer right now.

Called Windows Continuum, the unique Lumia 950 and Lumia 950 XL feature lets anyone turn the device into an almost full-fledged Windows 10 computer that behaves pretty much like a laptop or desktop. All the while, the phone is still functional, and the user can simultaneously enjoy a full Windows 10 mobile device and an almost desktop-like Windows 10 productivity experience.

Turning a Lumia 950 or 950 XL (both devices have the same hardware so they’ll offer a similar overall experience) into a Windows 10 device seems relatively easy, at least in Microsoft’s demo. You still need a special Microsoft Display Dock that connects to the Lumia phone via UBS Type-C port, and to a display, keyboard and mouse – and even external storage – via other ports (HDMI, DisplayPort and USB).

Once that’s done, Windows 10 appears on the screen, where the user can continue to use the universal apps that are already preloaded on the phone.

It’s not only the user interface that’s projected on the screen that screams PC experience, but it’s also the actual feel of things. Users will be able to use the same keyboard shortcuts they’re accustomed to from a PC, including Alt-Tab to switch apps, or Ctrl+V to paste content, even though it’s all powered by a tiny phone.

Comparatively, the iPhone has Handoff, which lets you continue activity in supported apps on a different device, including iPad and Mac. And some folks have turned Android devices into Android “PCs” by hooking them up to displays and keyboards. But both Apple and Google are not ready to offer the same kind of PC-on-a-smartphone experience Microsoft is proposing.