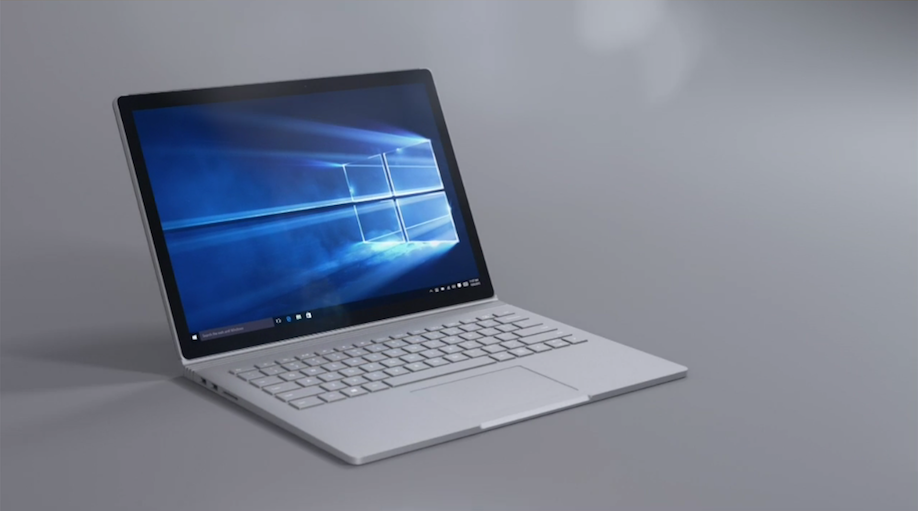 Made of metal, the Surface Book is slightly bigger than the Surface Pro 4, featuring a 13.5-inch PixelSense touchscreen display that packs 6 million pixels and 267 pixel-per-inch (ppi) ratio.

The Surface Book is going to be twice as fast as the MacBook Pro, and offer 12 hours of battery life.

The best thing about the Surface Book is that it disconnects from the keyboard, meaning that it can be turned into a Surface Pro tablet that’s about the same size as an A4 piece of paper. Just like the Surface Pro, it works with a stylus.

The top of the display contains the main hardware (CPU, RAM and battery) while the base contains the GPU and ports. The special Dynamic Fulcrum Hinge makes connecting the tablet side to the base.

Now running on 110 million devices around the world, Windows 10 is off to the fastest start in history — seeing upgrades at three times the rate of Windows 7 in the same time period. With more than 1.25 billion visits to the Windows Store, Microsoft announced all-new universal apps for Windows 10, including Box, Facebook, Instagram, Candy Crush Soda Saga, Flipagram, Uber, and others. These apps add to the existing Windows 10 experiences that will be available on the new Microsoft devices.

“With Windows 10 and these new Microsoft devices, you are at the center of magical new experiences,” said Satya Nadella, chief executive officer of Microsoft. “We’re moving people from needing to choosing to loving Windows, and these devices promise to fuel even more enthusiasm and opportunity for the entire Windows ecosystem.”

Building on its track record of pioneering new categories, Microsoft is redefining the laptop with the new Surface Book — a powerful, high-performance laptop with stunning craftsmanship and incredibly accurate and responsive pen and touch support. Ultrathin, Surface Book combines the impressive power of 6th Generation Intel® Core™ i5 and Core™ i7 processors with up to 12 hours of battery life4. The 13.5-inch optically bonded PixelSense Display delivers a high-contrast 267 dpi display with improved latency and parallax, making it not just beautiful to look at but natural and fluid to write on. The screen also detaches, so it can be used like a clipboard to sketch, take notes and benefit from Windows programs like Microsoft Edge. An optional discrete GPU allows Surface Book to harness the full power of hardware-accelerated graphics for seamless video editing, fast rendering or immersive gaming. Surface Book starts at $1,4995.

The tablet that can replace your laptop just got thinner, lighter, faster

Microsoft also introduced Surface Pro 4, the thinnest, lightest and most powerful tablet that can replace your laptop. At only 8.4 mm thin, it features a stunning 12.3-inch PixelSense Display and 6th Generation Intel® Core™ m, Core™ i5, and Core™ i7 processors, enabling everyone from students to professionals to get more done on the go. Starting at $8995, Surface Pro 4 is not only 30 percent more powerful than Surface Pro 3 but also quieter, runs cooler, and is even more efficient with up to nine hours of battery life4he new Surface Pro 4 Type Cover6 takes Surface Pro 4 from tablet to laptop in an instant and features a redesigned mechanical keyboard with optimal key spacing for fast and fluid typing. Backwards compatible with Surface Pro 3, the new Surface Pro 4 Type Cover comes with an optional fingerprint reader, bringing the convenience and enterprise-grade security of Windows Hello to existing customers. The redesigned Surface Pen packs 1,024 levels of pressure sensitivity, letting you write, draw and mark documents with precision ink on one end and an eraser on the other.

Surface Book, Surface Pro 4 and new accessories are available for preorder in select markets Oct. 7, then for purchase in Canada and the United States on Oct. 26, with additional markets to follow. Full device and accessory specs are available here, here and here.

The company also reinforced its commitment to mobile with the introduction of Lumia 950 and Lumia 950 XL, the first Windows 10 Lumia phones and newest premium phones from Microsoft. With more people using multiple devices throughout their day, Windows 10 provides a familiar and consistent experience that enables a seamless and productive transition from one device to another, whether PCs, tablets or the new phones. With Continuum capability for phones enhanced by the new Microsoft Display Dock accessory, connect the phone to a monitor and transform it for larger-screen entertainment, or add a keyboard and mouse to work like a PC with Windows 10 apps like Microsoft Office, while simultaneously taking calls or performing other tasks6. With the latest-generation PureView cameras with 20-megapixel sensors, triple LED natural flash and 4K video capture, the Lumia 950 and Lumia 950 XL enable faster focus and crisper images and videos even in challenging conditions. Lumia 950 and Lumia 950 XL will become available in select markets in November; local retailers or operators can give pricing and availability. Full device specs are available here and here.

Microsoft also announced Microsoft Band 2, the latest fitness wearable designed to help you live healthier and achieve more. The new Microsoft Band features a new curved display, making it even more comfortable to wear, and Cortana8 enables you to reply to texts or set reminders with the touch of a button. Alongside a continuous optical heart rate monitor and onboard GPS, the smart band still tracks calories burned, deep exercise and sleep quality — and now records floors climbed — all while maintaining up to two-day battery life. Microsoft Health is available as a universal Windows app, a dedicated app for iOS and Android devices, and via a Web Dashboard, all enabling people to set wellness goals and receive actionable insights. Starting at $2495, Microsoft Band 2 is available for preorder in select markets Oct. 6, then for purchase in the United States on Oct. 30, with additional markets to follow. Full device specs are available here.

Powered by Windows 10, the new Xbox One experience will launch around the world in November. This free update is a complete redesign built on the cornerstone of Windows 10 and provides the fastest and most social Xbox experience ever. Also launching in November, Xbox One Backward Compatibility9 lets you play your Xbox 360 games on Xbox One for free with 100 games at launch and hundreds more in the months ahead. Backward-compatible Xbox 360 games will also be playable on Windows 10 through game streaming from Xbox One to Windows 1010. Games like “Halo 5: Guardians, Rise of the Tomb Raider,” “Forza Motorsport 6,” and “Gears of War: Ultimate Edition” cement this holiday as the greatest lineup in Xbox history. What’s more, Microsoft is offering gamers unmatched value and choice this holiday with its most extensive bundle lineup ever, starting at $3495. Whether it’s the Xbox One “Halo 5: Guardians” Limited Edition Bundle, the Xbox One 1TB “Fallout 4” Bundle that includes both the critically acclaimed “Fallout 4” and a full-game download of “Fallout 3” for Xbox 360, the Xbox One Elite Bundle, or the Xbox One 1TB Holiday Bundle, there’s a console for every gamer. Full details on Xbox One and the new Xbox One experience can be found here.

In the United States, Surface Book, Surface Pro 4, Lumia 950, Lumia 950 XL, Microsoft Band 2 and Xbox One will be available through microsoftstore.com, more than 110 Microsoft stores, authorized resellers and select partner retailers. More information on Windows 10 and Microsoft devices can be found at http://blogs.windows.com/launch.

Microsoft (Nasdaq “MSFT” @microsoft) is the leading platform and productivity company for the mobile-first, cloud-first world, and its mission is to empower every person and every organization on the planet to achieve more.

2 Cortana available in select markets at launch; experience may vary by region and device.

7 Coverage, service and 4G/LTE are not available everywhere. See carrier for coverage details.

8 Cortana available with Windows Phone 8.1 or later; available in English only.

9 Xbox One Backward Compatibility feature works with select Xbox 360 games; see http://www.xbox.com/xbox-one/backward-compatibility. Xbox 360 accessories and Kinect, and games requiring those accessories, are not compatible with Xbox One consoles. Xbox Live and broadband Internet required for initial download of game to console.

10 Stream to one device at a time; streaming with multiplayer from Xbox One requires home network connection and Xbox Live Gold membership (sold separately).

Some information relates to pre-release products, which may be substantially modified before availability.