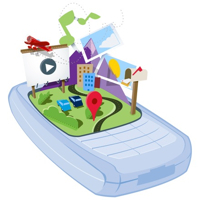 12:06 ET: He’s talking about partnerships and how they are creating a whole new mobile experience, and you guessed it! That is Android! This is not an announcement of the gPhone, but rather thousands of possible new devices.

12:08 ET: Renee Oberman of Deutsche Telekom: T-Mobile is one of the founding members of the Open-Handset-Alliance. Google is already a T-Mobile partner in Europe, and T-Mobile has committed to Android to create more value for their customers to mobilize their social and personal networks, and to also personalize their mobile experience. Their current plans are to launch a device with internet and Web 2.0 services in the U.S. and Europe within the 2008 calendar year. More details will be disclosed in the coming months, so we won’t get a real glimpse at what sort of device we’re looking at. But social networking keeps being mentioned and it seems like that is going to be a big push here.

12:11 ET: Peter Chou, CEO of HTC: HTC has focused on being commited to delivering the most in depth and robust mobile experience possible. HTC has made a successful mark on the overall industry. Again, personal mobility being mentioned and that the “glove does not fit all.” HTC and Google share a vision to bring a new mobile phone with integrated hardware and powerful software for an great mobile experience. HTC is looking forward to expanding their device portfolio with consumer-based mobile phones. They plan to release the first Android-powered mobile phone in the second half of 2008.

12:14 ET: Paul Jacobs of Qualcomm: Qualcomm is pleased to be working with Google and the OHA (duh!). Qualcomm is looking to enable consumers to enjoy media-rich services on their handset and they have invested numerous resources to getting Android running over the last few years. Rapidly expanding 3G networks and connectivity, and their new 3G chipset breaks all previous records and integrates GPS, mobile TV, graphics cards, 3G, Wi-Fi, etc. Video, location, music, gaming, and again, social networking a big push here.

12:17 ET Ed Zander, CEO of Motorola. Ed!!!!!! Motorola is extremely pleased to be a part of the OHA, (please, stop, guys) and is excited to work with an open software alliance and they have been doing so previously. Yeah, whatevz. Today’s announcement is more about any one vendor or product, but about open applications, open platforms, and more and robust internet services. They hope this will bring rich internet-based services faster to the consumer than ever before. Motorola will jointly be developing products.

12:19 ET Bill Yang, China Mobile is on as a last minute addition.

12:20 ET An open mobile platform is the key to success here. Everyone is talking about faster development and more choices to the end-user. Co-branded, schmo-branded, China Mobile sit down, please.

12:22 ET  Sergey Brin: Talking about sitting in a cubicle at college, and how they created everything based on open technologies. Based on Linux, and GNU, and Python and Apache — everything was open standards. These all allowed them to do great, new, and innovative things to distribute to the world. They are excited to develop an open system, all code and tools will be available, and will hopefully allow everyone to do the same thing they were able to do.

12:23 ET Q&A now! BBC is asking about the handset manufacturers and if these manufacturers will not use any other operating systems since they are in OHA — what a frigtard!

12:25 ET Peter Chou pwned him. Basically said, “No, you fool, we will continue doing what we do.”

12:27 ET Om Malik, GigaOm! Wants to know how this basically works. Will everyone be competing with each other, how does the alliance work? Andy Rubin answered, and they are dealing with “the reality of it.” An SDK will be out in one week to start developing. Oooook.

12:28 ET How will mobile advertising work here…It is a very robust XHTML web browser so there will be “no difference to browsing on your mobile phone and your desktop.” We will also not be seeing ad-driven mobile handsets here for quite some time.

12:29 ET  Eric: This is not the gPhone, but if there were one, it would be made out of this platform. There will be many, many different types of devices and a wave of innovation.

12:31 ET Did they ask Nokia, Microsoft, Apple, and RIM to join? There are 5 categories and each one is represented by companies that contribute something to the alliance, and it is completely open to people who want to join and contribute.

12:32 ET Is this just smartphones, or is this feature-phones, too? There are unlimited possibilities, but they have no plans to talk about it now, says Peter Chou.

12:32 ET Peter Jacobs, please stop hawking your chipset at us!

12:32 ET Google already offers text services for mobile phones — Eric answers — the problem is most phones don’t have full capabilities, and the Android platform has a full-power browser and every applications that runs on a future web standard should run perfectly on your mobile Android browser, and also, your desktop.

12:33 ET ComputerWorld: Is this a soft-phone that seems to work on anything? Android is a little lifeless, what the hell is the name about? Andy Rubin: Mobile phones are embedded devices, flash ROM, etc. So, Android is not a soft-phone, yet. About the name…it was the name of his start up company, and Google acquired Android in 2005, and they’ve been working inside Google ever since,

12:35 ET Berlin, baby! Eric is saying they are not announcing a gPhone today, but if there were a Google Phone, it would be based off Android, and to think of thousands of Google Phones.

12:36 ET Idiot had his phone on mute…he wants to know how this relates to the Linux mobile community. Andy Rubin: Tech specs of the platform will be made within the next week when the SDK goes live…and it is obviously Linux-based.

12:38 ET Eric is on the board of Apple, and now he is releasing a new platform for devices? OK, dude, please stop talking…Eric answers the first question. He uses an iPhone, boo ya! Android is an opportunity to use new devices in new ways in the future. Minimum requirements for the cell phone is about a 200MHz ARM9 processor and is compatible with almost all sort of physical configs.

12:40 ET Andy Rubin: this is open source, and anyone can take it and modify to fit their own needs. Eric: the fact that Android is software that everyone can modify and adopt, even competitors can use it and make it work. They are waiting on developers, thus the reason for announcing now and shipping the SDK next week, to get everything ready.

12:42 ET Is there a minimum set of requirements carriers and manufacturers have to keep in the software to be considered Android. The license they chose has no restrictions, and carriers can take out whatever they want.

12:43 ET How many phones are you expected to sell? It is too early to forecast device sales at this point.

12:44 ET Does the license protect consumers to install software on their devices, or can carriers completely “lock down” Android devices. Eric: the industry can create completely locked down devices, but it is highly unlikely.

12:46 ET How does this play into the 700MHz auction? Eric: Android will run extremely well on any mobile network.

12:47 ET How does Google get around the carriers for mobile advertising, and how does this OHA change that? Eric: sharing revenue is a better ecosystem, and this is a partnership, and they will do so in whatever terms make sense. The fact Android allows it, does not require it, but it is highly likely they would do it.

12:49 ET The iPhone is coming out Friday in the U.K., and is this a move to take away from the iPhone because of this announcement. Andy: this an open platform, and it available for anybody to use, so we imagine many, many, innovations.

12:50 ET Another gPhone question. Will their be a gPhone? Eric: We don’t preannounce products, but they don’t want to close the door either. So, in order to be a gPhone, Android will be a correct choice and this is more a platform play, and it is not a product announcement. What does this mean to the average consumer? Eric: in order to get a new mobile experience, you need a group that usually does not have a lot of access to mobile phones, and that is developers. They are relying on developers to create anything they have imagined, and this is a test to see what devs can come up with for a mobile platform.

12:52 ET How will this platform let people get the content they want? Andy: UI is “top-notch.” SDK will be an early look, so this will be opening the actual development process, and will be taking input from the community, and possibly change some things. Google will be providing hosted services, and will enable devs to release apps.

12:54 ET Final question! Google announces when they are ready, but Open Social will be a framework that will run extremely well on Android, and the devs are building interesting social networking apps, and will benefit from Android’s mobility.