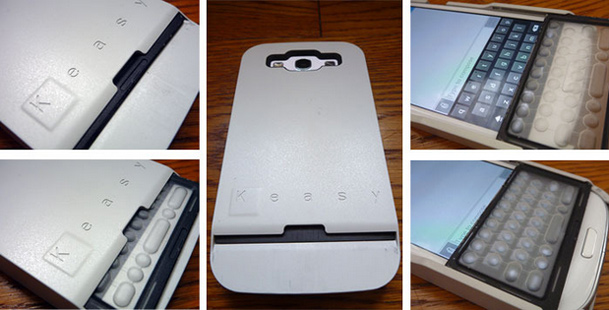 The past week has been among the roughest BlackBerry has seen in recent history as its share price plunged more than 25% following a huge earnings flop. As analysts continue to back away from the stock and paint ever-worsening pictures of BlackBerry’s future in their research, a small startup has managed to find a new way to kick BlackBerry while it’s down. In a press release titled “Blackberry’s Future Further Endangered By Physical Keyboard Case: Keasy,” a small U.K.-based upstart is looking to exploit BlackBerry’s woes in an effort to gain backers for its KickStarter project, which offers a protective case for the Galaxy S III smartphone that features a detachable physical keyboard. The project has received crowd-sourced funding totaling £2,266 of its £45,000 goal as of the time of this writing. Keasy’s full press release pitching its keyboard case, which it calls a “nail in BlackBerry’s coffin,” follows below.

From Clerkenwell, London, a new product called Keasy stands to make Blackberry’s position in the smartphone market ever more fragile with the introduction of an on-screen physical keyboard.

Blackberry’s hold on the business market has been waning with the growing popularity of large screen smartphones (as visible in this independent study and graph from IHShttp://www.wired.com/images_blogs/gadgetlab/2013/04/IHS_Chart_display.jpg).  However, the physical keyboard and built in business security tools have kept it afloat up until now.  Other manufacturers like Samsung and Apple have jumped aboard and can now be relied on to provide built in enterprise security solutions, like Knox and Safe – not to mention third party security software like Good For Enterprise. Blackberry users should now feel more comfortable with the switch to Android and iOS products.

UK startup, Keasy, now raising funds on Kickstarter ( http://kck.st/1cSvgV9&nbsp;)seeks to further endanger Blackberry’s position in the smartphone market with the development of a new protective smartphone case and a built in keyboard that brings your on-screen keyboard to life.  The keyboard slides away in the back of the case when not in use, and slides into position on the front for accurate text entry.

“Smartphones have changed a lot, but their touch screen keyboards just aren’t adapted to our existing typing skills.”, says Oscar M, the creator of Keasy. “We’re familiar with using a physical keyboard on a computer, allowing us to touch-type.  But on touch-screen smartphones that facility has all but disappeared. Until now.”

The development of the Keasy keyboard case started in May 2012, with a handful of home-made prototypes which lead to a successful proof of concept, made primarily from Sugru. With contacts in the far east (Taiwan), Oscar M was able to secure cooperation and advice from established mobile accessory manufacturer, Wiseways. Since then they have been working together to enhance the user experience with an affordable accessory.

Keasy plans to launch the product with a case for the Samsung Galaxy SIII, Samsung’s most successful smartphone to date. When asked why, Oscar M had this to say. “The iPhone seems like the obvious choice, but iPhone seems to always get the newest products first. I love the flexibility of Android and wanted to give the Android community first crack. It’s only fair.”