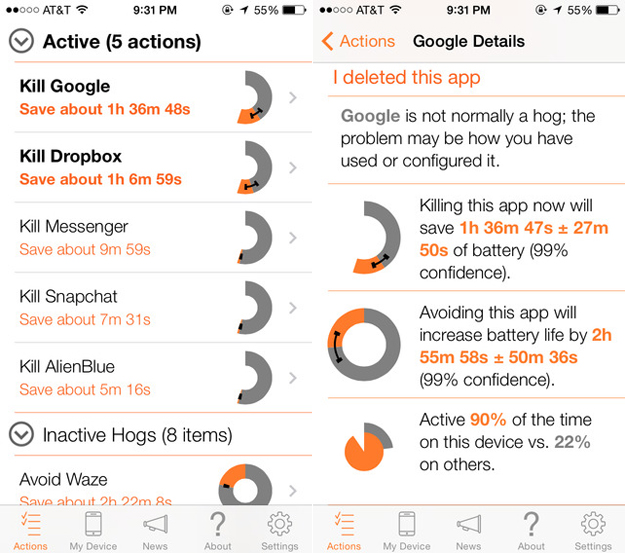 Relatively poor battery life is one of the biggest complaints people have about Apple’s iPhone lineup, and the iPhone 6 isn’t really expected to make any huge advancements in this area. The next-generation iPhones are indeed expected to have bigger batteries than current models, but they’ll also have larger displays and other new power-gulping features.

As much as people complain about battery life, few actually make an effort to adjust their usage patterns in an effort to extend each charge as long as possible. For those interested in getting more out of their batteries, there’s a nifty new iPhone app that will be a huge help.

A new app by Kuro Labs called Normal has been making waves among iPhone users and if you haven’t yet checked it out, now might be the time. Normal sits quietly in the background and monitors all of the other apps on your iPhone in order to make you aware of which apps are killing your handset’s battery life.

Normal is a battery diagnosis service that suggests personalized actions you can take to extend your battery life. By aggregating data from hundreds of thousands of users, Normal is able to accurately and precisely pinpoint the battery hogs on your device, tell you whether or not this is also happening to other people, and project by how much time you will extend the battery by killing each hog.

Using Normal is simple: Install and run the app, perform any actions it suggests (at your discretion), and watch as your battery life increases!

Normal works by collecting generic usage data on your device over time—including what apps are running, what type of device you have, and the battery level—and aggregates it on our cloud platform. Normal then analyzes this data, along with data from all our other users, with proprietary statistical algorithms designed at UC Berkeley’s AMP Lab. The results, in the form of suggested actions and statistics about the battery impact of your apps, are then sent back to you.