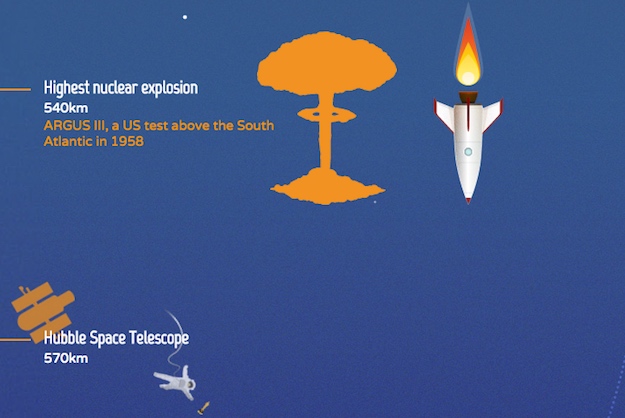 With all of the commotion and intrigue surrounding the New Horizons spacecraft approaching Pluto, the BBC recently highlighted an incredible interactive piece they put together last year which provides an engaging and informative approach to answering a question most everyone has wondered at some point in their lives: just how big is the Universe?

Employing some clever scrolling animations, the BBC page not only provides viewers with answers, but adds in all sorts of interesting facts about space for additional context and learning opportunities. For instance, the interactive graphic tells us that a Soviet dog named Laika once travelled 1,031 miles up into space atop the Sputnik 2 in 1957. As another example, the graphic tells us that GPS satellites are in orbit 12,555 miles above earth. Who knew?!

One final and interesting data point worth noting is that the farthest distance from earth ever reached by humans was 248,548 miles.

All in all, the interactive graphic is well worth checking out in its entirety. Make sure to hit the source link below to check it out.