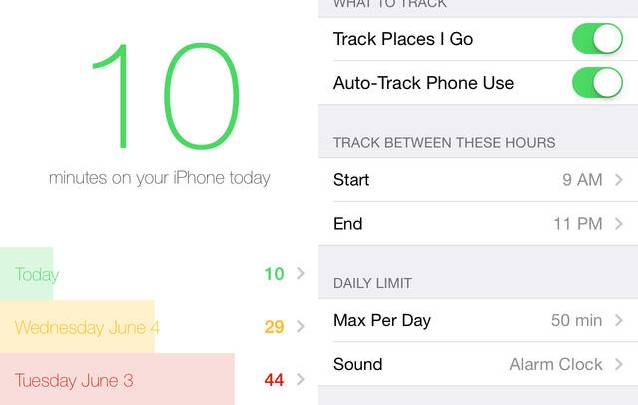 Moment is a new iOS app that has some interesting tracking abilities, TechCrunch reports. The app will run in the background, looking at how much you use the phone each day, and – if enabled – it will even track locations. Furthermore, the app can list usage statistics and can help users set up a limit on their daily iPhone usage in order to cut down their addiction.

Developer Kevin Holesh, who created Moment for his personal use, says he made it in order to keep track of his iPhone addiction, and to give him a nudge when he’s been on it for too long. Holesh said that soon after moving in with his high school sweetheart, he noticed how both of them chose more and more to relax by starting at their smartphones rather than other activities.

“Relaxing meant whipping out our iPhones and catching up on the latest happenings in social media,” he wrote. “Her drug of choice is Instagram. Mine is Twitter. We stopped doing fun and productive things and chose the path of least resistance.”

“When I first started using Moment, I was spending 75 minutes on my phone every single day,” he added. “I currently have my daily limit set to 40 minutes, so after 40 minutes on my iPhone for the day, I get an annoying buzzer telling me to look away from the glowing box in my hands. That’s a good amount of time for me right now.”

While the app may indeed be useful to those people who spend too much time on the iPhone, it also goes against everything the App Store stands for. Ironically, an iOS app developer came up with a way to limit the time users spend on the iPhones and therefore on apps.

The application is available as a free download from the App Store and requires iOS 7.0 or later to run.