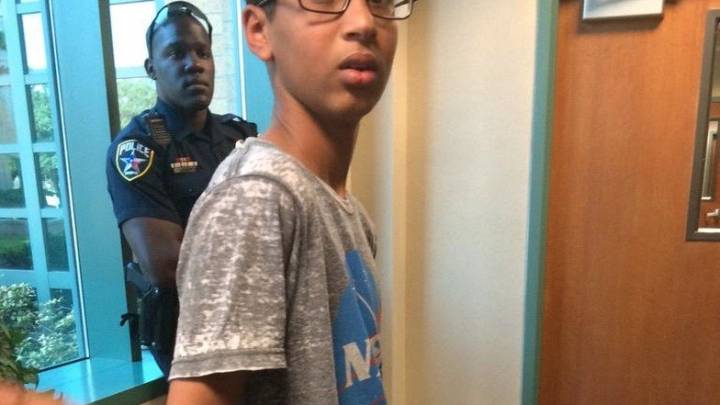 14-year-old Irving, Texas native Ahmed Mohamed was practically born a mechanical engineer. He loves robotics and he regularly builds things like clocks and radios at home. Earlier this week, the young MacArthur High School student went to school with one of his latest projects in hand, a homemade clock of which he was particularly proud.

That’s correct. The image above shows a bright young 14-year-old engineering wiz in a NASA t-shirt being hauled off by police in Irving, Texas for bringing a homemade clock to school. A more attentive teacher might have seen the device and known that the budding engineer loves to build gadgets at home. Ahmed’s teacher called the police.

From The Dallas Morning News:

School officers questioned Ahmed about the device and why Ahmed had brought it to school. Boyd said Ahmed was then handcuffed “for his safety and for the safety of the officers” and taken to a juvenile detention center. He was later released to his parents, Boyd said.

“The follow-up investigation revealed the device apparently was a homemade experiment, and there’s no evidence to support the perception he intended to create alarm,” Boyd said, describing the incident as a “naive accident.”

Asked if the teen’s religious beliefs factored into his arrest, Boyd said the reaction “would have been the same” under any circumstances.

Of note, police acknowledged immediately following the incident that at no point did the young 14-year-old claim the device was anything but a homemade clock. Meanwhile, Irving authorities continued to call the clock a “hoax bomb.”

At a press conference on Wednesday afternoon, Irving Police Chief Larry Boyd confirmed that the department would not be filing charges against the young boy. Police also released an image of the homemade clock, which can be seen below.

While the entire ordeal is obviously upsetting, it does have a happy ending: Ahmed may not be allowed to bring his incredible creations to school, but they’ll be welcomed at the White House.

Cool clock, Ahmed. Want to bring it to the White House? We should inspire more kids like you to like science. It’s what makes America great.