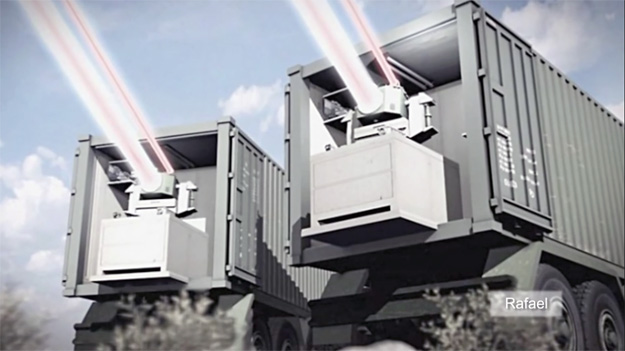 Late last week, we showed you a new type of rifle that can shoot a drone out of the sky without firing a single bullet. While the term drone has recently been expanded to cover somewhat harmless consumer quadcopters, more sophisticated drones pose a real threat to militaries, governments and more. Rifles that fire radio waves aren’t the only anti-drone devices out there though, and Israeli defense contractor Rafael showed off its sophisticated “Iron Beam” system earlier this week.

As noted by Popular Science, there are four basic ways to combat drones. The first is with traditional armaments that fire bullets or rockets, and the second is catching them with special devices created specifically to trap drones. In fact, these devices can be drones themselves. The third method uses radio waves to either hack a drone in mid air or to send it tumbling out of the sky, as is the case with the anti-drone solution we covered last week.

Then, there are lasers.

Laser weapons like the Iron Beam have been in development for some time, and Rafael’s is an example of one that will likely be deployed by many militaries in the near future. Systems like this one use lasers to actually burn drones mid-flight, destroying their circuitry or even their wings as they fly.

Rafael hasn’t yet deployed Iron Beam, but the system was demonstrated earlier this week at a defense technology expo in South Korea. It could see widespread adoption in the near future as militaries around the world seek out anti-drone weapons that are as effective as rockets but far less expensive to use in the field. The entire Iron Beam system is small enough to fit in a single shipping container and it can be mounted on the back of a truck. It also has an impressive range of 1.25 miles and can fire continuously as long as it is connected to an electrical power source.