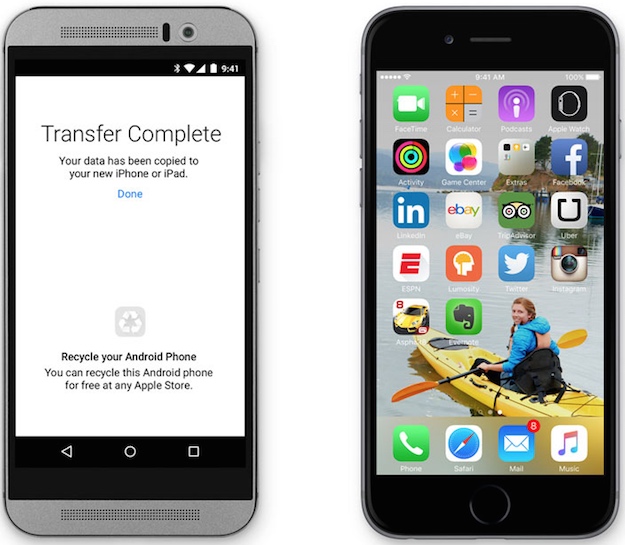 A new app from Apple will make it easier than ever for Android users to switch to the iPhone. Dubbed “Move to iOS”, the app makes the process of transferring data from Android devices to a shiny new iOS device a breeze. Though Apple didn’t have time to mention it during yesterday’s nearly 2-hour long keynote, the app is prominently displayed on Apple’s iOS 9 feature page.

Once downloaded, Apple notes that the app can help users wirelessly (and securely) port over items such as contacts, message history, camera photos and videos, web bookmarks, mail accounts, calendars, wallpaper, and DRM-free songs and books.

On top of that, the app will also assist users in re-building their app library. Specifically, any free apps that users enjoyed on Android will be suggested for download from the App Store. Meanwhile, any paid apps that Android users previously enjoyed can be quickly added to a user’s iTunes Wish list.

While this feature alone certainly won’t convince Android users to jump ship for the greener pastures of iOS, it will undoubtedly make such a transition much more seamless for those willing to take the plunge. Considering the increased pace of Android to iPhone converts since the release of the iPhone 6 and 6 Plus, this app will undoubtedly come in handy.

As a final point, Android users can now trade in their current devices for credit towards the purchase of a new iPhone. While such a program for used iPhones has existed for years now, Apple just opened it up to Android this past March.