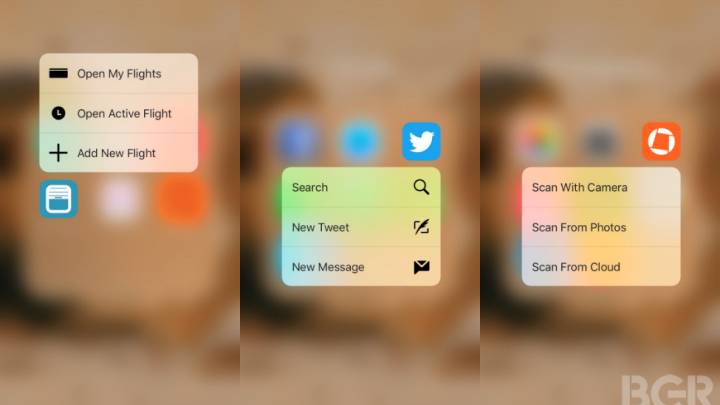 The iPhone 6s’s most interesting feature is 3D Touch, a new pressure-sensitive touch gesture that I’m still trying to master. Aside from various Apple apps that come with 3D Touch support, there are many interesting third-party apps that have since been updated with with new 3D Touch features. We showed you 10 apps that are compatible with 3D Touch a few weeks ago, but many other top apps have been updated since then and now feature 3D Touch support.

This one doesn’t need any more introductions. Facebook has recently updated its iOS app to offer Quick Actions via 3D Touch gestures. These are shortcuts for writing posts, uploading photos and videos and taking pictures or recording videos directly from the phone’s home screen.

Also a Facebook property, WhatsApp comes with Quick Actions shortcuts for starting a new chat and searching your chat. Inside the app, Peek and Pop gestures let you preview items you share with your friends.

Microsoft has just updated Skype for iOS to include 3D Touch actions. These include quick-start actions from the Skype icon (search, dial pad, new chat and new call), as well as support for Peek and Pop in instant messages and live video calls.

Telegram is also a popular mobile chat app that has recently received support for 3D Touch. The app lets you preview chats from chat lists (Peek and Pop) and you can open chats directly from the home screen by force-touching the screen.

Love Snapchatting with your friends? Well, good news, you can now do it even faster. The fresh Snapchat 9.18 update brings Quick Actions that let you start a chat or add a new friend directly from the home screen.

Shazam is among the first apps to support 3D Touch. A stronger press on the app’s icon will get you fast access to Shazaming a song, auto Shazam and visual Shazam

Looking to quickly preview recipes on your iPhone while preparing your next meal? Blue Apron can help as it’s 3D Touch enabled now, which means you can Peek at recipe content with a hard press on the screen. Quick Actions include launching the camera and accessing Delivery Schedule or the most recently viewed recipe.

Whether you’re traveling to a new city or trying to make the most of navigating your busy town, Citymapper can help. 3D Touch Quick Actions for the app include options for getting you home or somewhere, searching nearby stops, and sharing your location via WhatsApp. You can also Peek to see detailed status for every line.

App in the Air

Frequent travellers should download both Citymapper and App in the Air. The latter wants to be your go-to app for airplane travel and it has 3D Touch support including Quick Actions for the home screen such as adding new flights, opening active flights and opening your flights.

Since you might be travelling a lot this upcoming holiday season, you might want quick access to an app that tells you what’s going on around you. AroundMe might be the app you were looking for, and it comes with 3D Touch support. You can search in AroundMe directly from the app icon, and Peek for venues inside the app.

Looking to scan documents on the go? Genius Scan is the app you might want to use for that purpose instead of simply snapping a quick picture of that document. The app has 3D Touch home shortcuts that include the options of scanning with the camera from Photos or from iCloud.