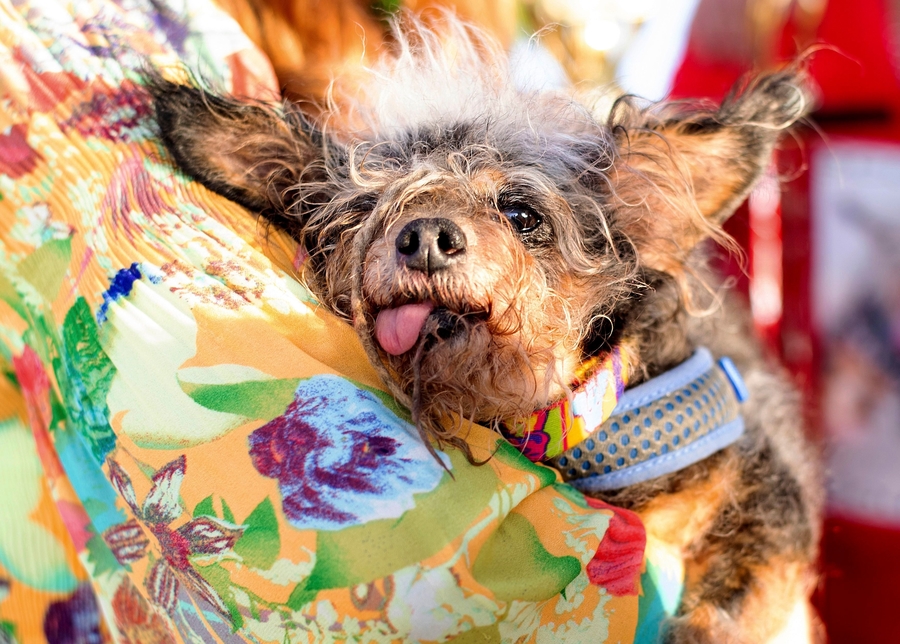 Last year’s runner up in the annual Ugliest Dog Contest held at the Sonoma-Marin Fair in Petaluma, California, was a messy-haired good boy with no teeth named Scamp the Tramp. No one actually knows what kind of breed he is, and it was clear before he got rescued in Compton — where he’d been founding wandering around licking fast food wrappers — that he’d had a hard life up to that point.

Over the weekend, though, Scamp went from being a tramp to a champ. More specifically, he was named the winner of this year’s Ugliest Dog contest, netting his owner Yvonne Morones a massive trophy and $1,500.

Morones, who named Scamp in honor of a long-ago admonition from her grandmother, said she adopted Scamp from an animal shelter in Los Angeles. She still remembers riding in the car with him the day she brought him home. The first day she brought the scraggly little guy with clumpy hair and short legs into her life, Bob Marley’s song “One Love” was playing on the radio at one point while they drove.

The contest over the years has certainly drawn its share of critics, who argue that such events glamorize poor breeder practices in addition to just being — well, a mean title. Supporters say none of those things are the case at all — that, in fact, the event is also a lighthearted way to draw more attention to the need for rescues and the importance of shelters.

Not that Scamp himself was hurting for more attention. He certainly deserved recognition of some kind and plenty of belly rubs, because he’s a hard-working pup and busy with everything from working as a therapy dog to greeting the throngs of passengers making their way through Sonoma County’s airport.

He’s also a much-loved addition to Morones’ family, which also includes four Chihuahuas. Oh, and as for his name. Morones’ grandmother had once warned her, back when she was a kid, not to talk to strangers and to be wary of the “tramps” out on the streets. Lucky for one particular scruffy tramp, she didn’t always listen.