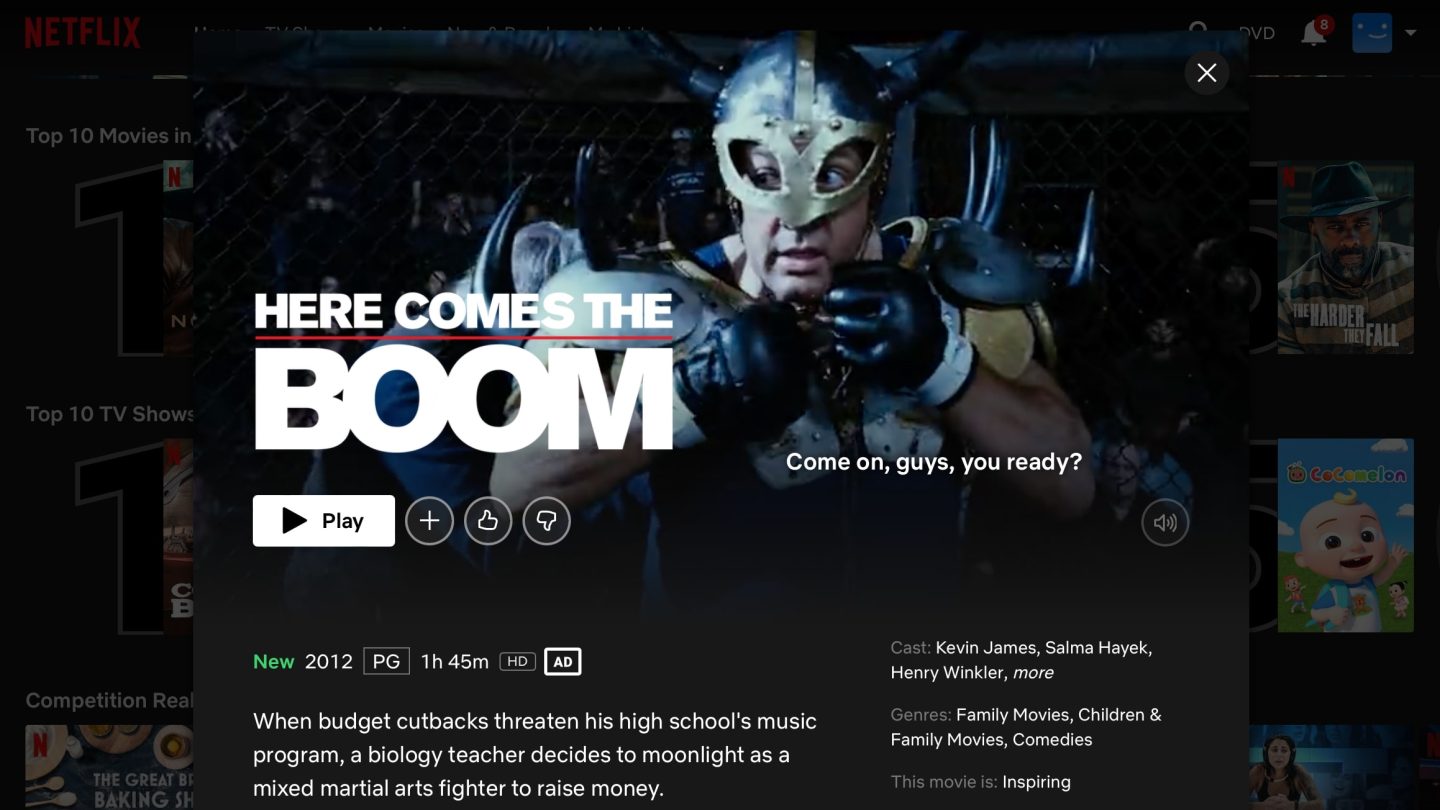 One of the buzziest Netflix original movies right now that everyone is talking about stars Andrew Garfield. The title is tick, tick … BOOM! and it’s an adaptation of Jonathan Larson’s autobiographical musical. Lin-Manuel Miranda makes his directorial debut here, focused on the work of the music theater icon who also created Rent. And yet — a not insignificant number of you are apparently tapping on the wrong movie in the Netflix app, in your enthusiasm for this one. This might explain why a Kevin James dud (aren’t they all) from 2012, Here Comes the Boom, is somehow trending on Netflix right now.

To be more specific, this movie is actually on Netflix’s Top 10 movie list for the US at the moment.

"So I watched this Netflix movie because people were saying it was going to be Oscar Nominated, and I don't get it? I love Kevin James but…this is dumb and it sucks."

Yes. My brother watched all of HERE COMES THE BOOM thinking it was TICK, TICK…BOOM.

Netflix’s landing page for the movie summarizes it thus. “When budget cutbacks threaten his high school’s music program, a biology teacher decides to moonlight as a mixed martial arts fighter to raise money.”

No surprise, the Rotten Tomato scores for the movie aren’t all that great. Here Comes the Boom has a terrible 41% critics score at the review site. That’s based on 97 reviews. Meanwhile, its audience score stands at 65%, based on more than 50,000 user ratings.

A review from my hometown newspaper, The Commercial Appeal, assigned a rating of 1.5/4 stars. Along with the following lament: “More pablum for moviegoers who can’t be bothered to chew even the softest food for thought, courtesy of Happy Madison Productions, the Gerber of motion picture companies.”

The “boom” movie you should care about, instead

Singing 🎶 this is the life 🎶 all day because #ticktickBOOMmovie is HERE. See Andrew Garfield star as Jonathan Larson, now on Netflix. pic.twitter.com/4EekuDo8RS

The movie with “boom” in the title that people are probably really looking for here, meanwhile, has a cast that also includes Alexandra Shipp, Bradley Whitford, Judith Light, and Vanessa Hudgens. The film follows Jon, played by Garfield — “a young theater composer who’s waiting tables at a New York City diner in 1990 while writing what he hopes will be the next great American musical.

“Days before he’s due to showcase his work in a make-or-break performance,” the Netflix synopsis continues, “Jon is feeling the pressure from everywhere. From his girlfriend Susan, who dreams of an artistic life beyond New York City. From his friend Michael, who has moved on from his dream to a life of financial security. (And from) an artistic community being ravaged by the AIDS epidemic. With the clock ticking, Jon is at a crossroads and faces the question everyone must reckon with: What are we meant to do with the time we have?”

The film is inspired by a musical Larson wrote concurrently with Rent. Per Netflix, it was Larson’s response to his experiences writing his first musical, Superbia. That one, despite positive feedback from Stephen Sondheim and others, ultimately went unproduced.