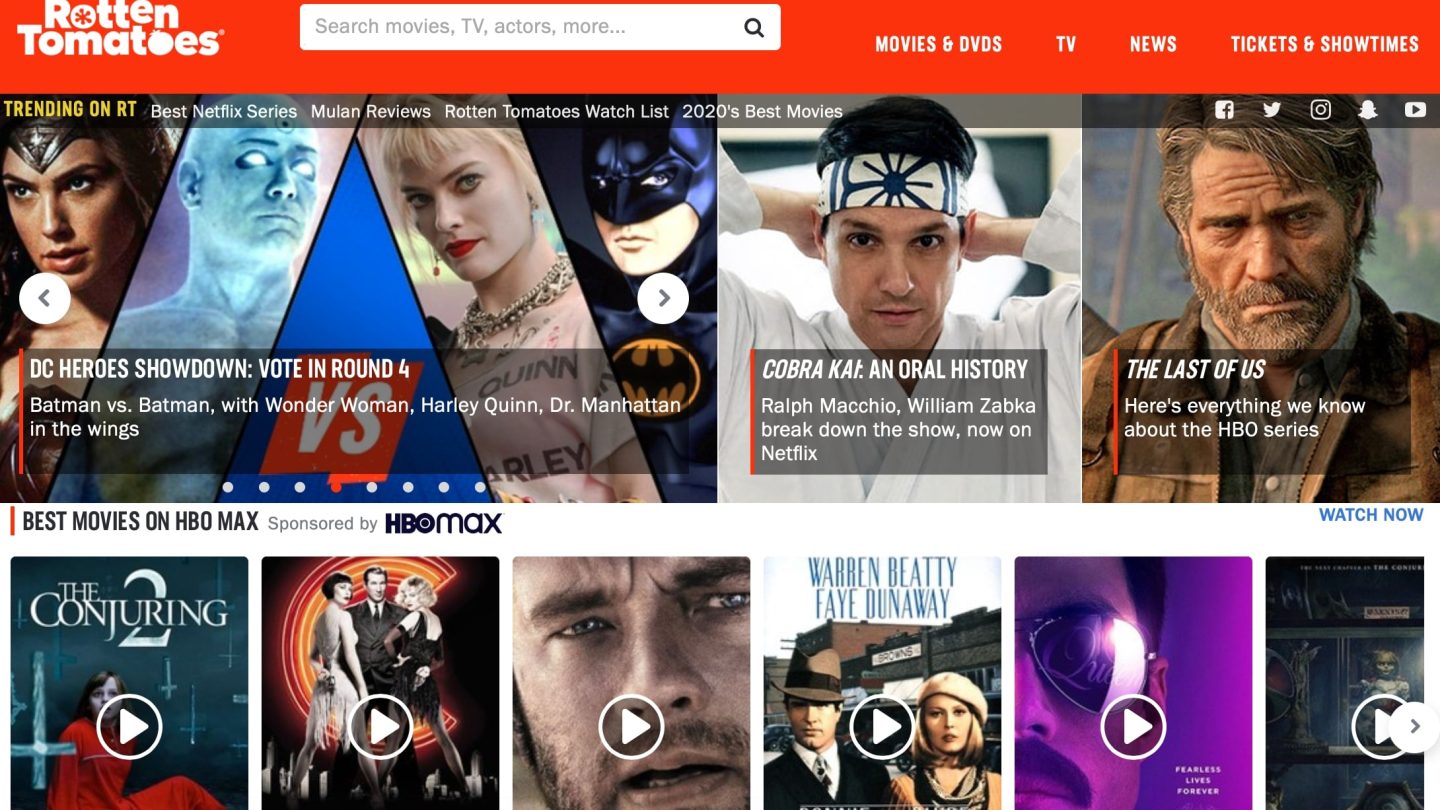 On Friday, will perform a closely-watched movie industry experiment, offering its highly anticipated blockbuster film Mulan as a premium video-on-demand addition to the Disney+ streaming service. What that means is if you’re a current subscriber, you’ll be able to pay a one-time fee of $29.99 to watch Mulan this weekend (instead of waiting until December, which is when will add the movie to the streamer for everyone, without that extra fee).

The movie is the latest in a growing list of live-action remakes of animated classics from Disney, and the embargo for the first batch of reviews from critics lifted on Thursday. To sample them, I immediately turned to Rotten Tomatoes, one of my favorite pop culture destinations on the web, and prepared to check out what early reviewers were saying — a habit no doubt familiar to many of you, given that the site has become something of a Bible for film and TV buffs who want to suss out what critics and fans are saying about the shows and movies we’re interested in.

Launched back in the late ’90s, the site today is an aggregator of news as well as TV and movie reviews from both critics and the general public, and it also compiles a closely-watched “Tomatometer” score for movies and shows that represents the percentage of professional reviews that are positive.

At the time of this writing, for example, 122 professional reviews of Mulan had already been gathered by Rotten Tomatoes. The percentage of positive reviews from that pile was enough to give the film — which the site raves is a “visual marvel” — a solid 80% Tomatometer score.

The first reviews are in for #Mulan – currently it's #Fresh at 76% on the #Tomatometer, with 88 reviews: https://t.co/lXumjxIv3n pic.twitter.com/KH0LgSy0It

All that said, the treatment that the site gives to a new release like Mulan only tells part of the Rotten Tomatoes story — and certainly doesn’t reveal the full scope of everything going on behind the scenes there.

I recently caught up with Joel Meares, Rotten Tomatoes’ editor-in-chief, to get a sense of how the coronavirus pandemic has forced the enterprise to retool itself — since, remember, it was only a few months ago that coverage of the newest releases coming to theaters was given the biggest and most prominent spot on the Rotten Tomatoes homepage.

Now? As Meares explains it, “the pandemic changed the nature of what we do on a day-to-day basis pretty dramatically.”

“When you would go to the site back in February, the first thing you’d see is a list of theatrical releases both in the theater and then upcoming,” he said. “We moved away from that, took that list off the homepage, and prioritized streaming — both TV and streaming series, as well as video-on-demand films and new streaming films.

“It’s been like much of the industry, with a shift of focus to the at-home experience. Even though we also know that, at the same time, the fundamental question and the fundamental reason that people come to Rotten Tomatoes hasn’t changed, even in the time of COVID. People are looking for guidance and recommendations of what to watch by themselves, with their partner, with their family. And we see it as our objective to really steer them in the direction that’s most useful to them.”

Additionally, the site crafted a new hub called “Binge Central” where all of its binge-related guides are housed. Which includes content like this list of five more things to watch if you loved Watchmen; this list of the best shows to stream on Amazon Prime; and a ranking of the best TV shows to watch during the month of September.

Because the pandemic led to millions of entertainment-hungry consumers being forced to quarantine and endure stay-at-home orders for long stretches earlier this year, Meares also told me that led the site to add other thematic guides tied to the kinds of content that people were searching for — especially during March and April. Things like “what to watch with my kids,” and the best shows and movies to watch when you’re by yourself.

“That was our sort of proactive reading of the tea leaves and getting our business into gear,” Meares said.

That shift in coverage certainly looks like a no-brainer now, especially considering how rapidly and comprehensively Hollywood ended up getting transformed by the COVID-19 pandemic — as if some invisible hand had smacked a big, red reset button and changed almost everything about the film and TV business. Such that, speaking only for myself, it feels incredibly weird now to think that I’m about to go see my first movie on the big screen this year. I’ve got two tickets to see Tenet at my local drive-in this weekend, which feels strange and radical and like a “win” of some kind.

Rotten Tomatoes certainly didn’t have as expansive a task in front of them as other web and journalistic properties when it came time to adjust itself to meet the new realities of our weird, scary COVID-19-dominated world. Certainly nothing like the challenge facing, say, traditional newsrooms and TV stations, which had to clear out offices while also figuring out how to adapt workflows to keep producing something like a daily news report.

What Rotten Tomatoes decided to do mattered nevertheless, though, because pop culture fans starving for content to fill the quiet moments at home still needed the site, all the same. At the time Meares and I spoke, The Old Guard was premiering on Netflix, while + and Hulu were also both debuting major film releases of their own (Greyhound and Palm Springs, respectively).

“For me,” Meares said, “what we do is provide the information and provide the tools that I encourage people to use really however they want. There are people, for example, who are going to look at Rotten Tomatoes and see a great score and go, ‘Oh, that’s a great score — I’m gonna watch that.’

“Some of the things we found, in terms of seeing comments and on social and in our traffic, was that there was a real interest in feel-good and comedy titles — especially in that first month-and-a-half of the pandemic. There was also an interest in family (content), because a lot of kids were home. And classics. I think people were really interested in taking the opportunity while they had the time and were stuck at home to catch up on things like the AFI top 100 movies that they decided they finally had time to get around to.”