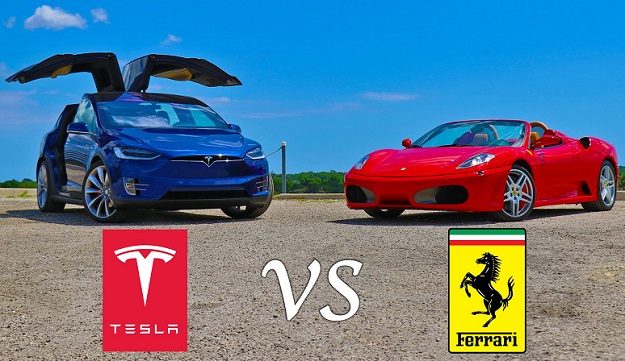 As Elon Musk likes to boast, Tesla doesn’t know how to make slow cars. In fact, when it comes to pure acceleration, Tesla offers borderline supercar level performance at a price point that’s incredibly reasonable when you look at how much some of the most expensive cars in the world typically sell for.

Over the past few months, we’ve seen no shortage of race videos pitting a Tesla Model S against all comers, including a Lamborghini Aventador, a McLaren 650s Spider, and even a Boeing 737. Does the Model S ever prevail? Of course not. But with a Model S in Ludicrious Mode capable of going from 0-60 in just 2.8 seconds, the raw acceleration is still a sight to behold.

Now that Tesla has finally gotten around to ramping up production on the Model X, we’re finally starting to see Tesla’s crossover SUV appear in drag racing videos of its own. Most recently, DragTimes decided to pit a Tesla P90D Model X in Ludicrous mode against a Ferrari F430. As a quick point of interest, a Model X in Ludicrous mode can go from 0-60 in 3.2 seconds, can complete a quarter-mile in just 11.7 seconds and has a top speed of 155 mph. By way of contrast, a Ferrari F430 can reach a top speed of 196 mph and can go from 0-60 in 3.8 seconds.

DON’T MISS: The iPhone 7 is going to be ‘boring’

Now think about that for a second: we’re comparing a relatively recent Ferrari to an SUV of all things.

In any event, the video below really showcases how impressive a tricked out Tesla Model X performs even when racing against a bonafide sportscar.

What’s particularly interesting about this video is that the Model X seems to hold its own for far longer than we’re accustomed to seeing. Typically, a sports car racing against a Tesla Model S will manage to catch up and reclaim the lead relatively quickly, but the Model X appears to really give the Ferrari a run for its money.