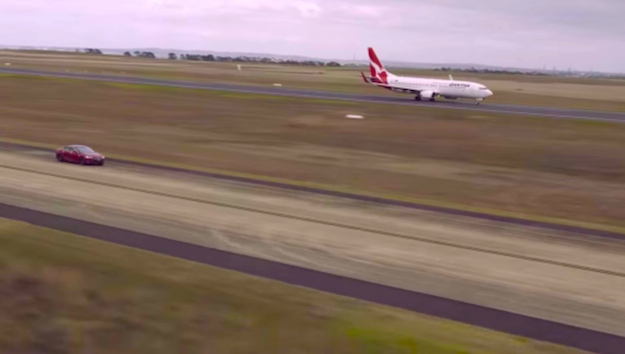 With the Tesla Model S featuring crazy settings like Insane Mode and Ludicrous Mode, it’s only natural that we’ve seen a plethora of videos showcasing how a tricked out Tesla performs against any number of supercars. From a Model S in Ludicrous Mode racing a Lamborghini Aventador to a Model S trying to take on a McLaren 650S Spider, the Model S can, at the very least, hold its own early on in such matchups.

Now it’s one thing for a Model S to take on a supercar, but what about a plane? Sure, such a matchup is completely crazy and wholly unnecessary, but that didn’t stop Australian airline Quantas from pitting a Tesla Model S P90D against one of its Boeing 737s.

“Plane versus car… pilot versus driver,” the video description reads. “We raced our Boeing 737 against a Tesla Model S to celebrate innovation and sustainability with Tesla Motors.”

The Model S naturally got off to a quick and early lead thanks to its ridiculous acceleration, but in the grand of scheme of things, there was never really a question as to who would come out ahead.

According to a Qantas press release, the 737 used here “can generate more than 50,000 pounds of thrust” and can reach a cruising speed of 528 mph in the sky. At full throttle, the 737 can approach the speed of sound, or about 767 mph.

The Tesla was hard to catch off the start. But the 737 narrowed the gap as it barrelled down the runway. Both travelled neck and neck as the 737 reached its take-off speed of 140 knots (161 MPH) and the Tesla reached its max at around 250 kilometres an hour (155 MPH).

The Tesla was in the shadow of the aircraft as it pulled up at the end of the runway – the clear early winner on the ground, just overtaken when the aircraft did what it was designed to do: fly.

Press release poetry aside, what type of cross promotion is going on here, you might naturally be wondering.

Qantas – Australia’s national carrier – and Tesla, the California based and world’s leading maker of premium electric cars, are collaborating to drive innovation for their customers and sustainability in the transport industry.

During the coming months Qantas and Tesla will introduce the following services and benefits for customers:

Regular meetings will occur between both companies to investigate future opportunities around sustainable transport.

Qantas’ Head of Environment and Fuel, Alan Milne, said the collaboration was a meeting of minds.

“Both our companies are passionate about continuing to push the boundaries of customer service, innovation and sustainability in the transport industry.

“We’re huge admirers of the way Tesla has transformed the electric car sector as a premium brand and we look forward to sharing our understanding and advance the work we started in 2012 on biofuels as an alternative to jet fuel.

“What better way to celebrate working together than having a unique race – car versus plane.”
While we continue to work on long-term sustainable transport solutions, all carbon emissions from this race were offset, under Qantas’ Future Planet Program.