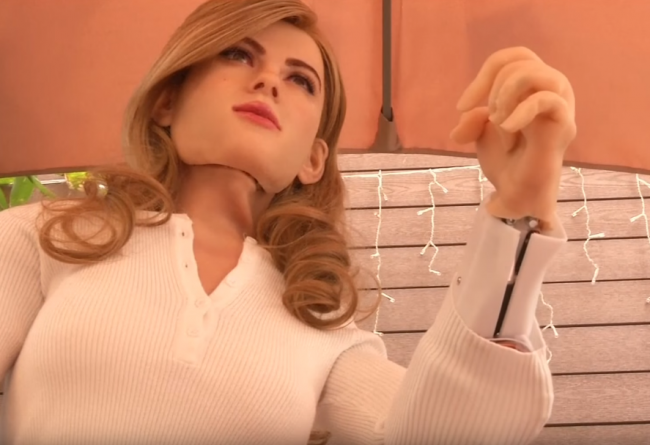 Plenty of guys out there have the hots for Scarlett Johansson, but most of them haven’t taken their obsessions to a level that’s this unhealthy. Mirror.co.uk brings us the story of Ricky Ma, a 42-year-old product designer from Hong Kong who spent $50,000 to create a creepily lifelike robot that looks like actress Scarlett Johansson.

Yes, this is real and it’s a wee bit disturbing.

DON’T MISS: Hound already runs rings around Siri and Cortana, and it’s just getting warmed up

The robot isn’t yet an Austin Powers-level fembot that can operate as a fully autonomously. Nonetheless, it can respond to questions and it does have the ability to show a limited number of emotional responses — when Ma tells the robot that it’s cute, for instance, it smiles and winks at him:

Ma tells Mirror.co.uk that he’s wanted to build his own robot ever since he was a kid and that he wasn’t intimidated by all the costs associated with building one. He used a 3D printer to create most of the robot’s skeleton, but the more challenging part for him was creating the robot’s software, as he had never once coded before. He nonetheless got the job done and it sounds like he couldn’t be happier about it.

“I figured I should just do it when the timing is right and realize my dream,” he explained to Mirror.co.uk. “If I realise my dream, I will have no regrets in life.”

Check out a video of the robot in action at this link.