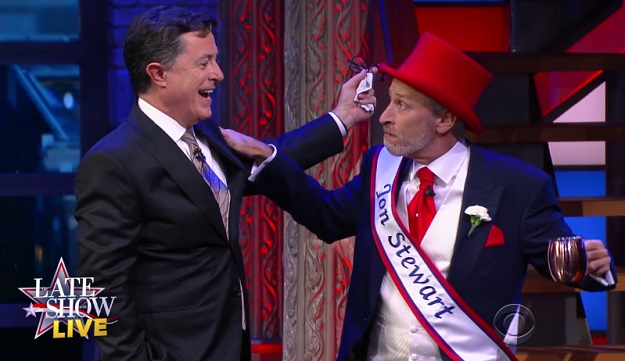 Jon Stewart may no longer be the host of The Daily Show but he’s certainly not out of the late night talk show circuit entirely. During last night’s episode of The Late Show with Stephen Colbert, Stewart made a surprise cameo appearance during an impressive musical number that ultimately urged viewers to go out and vote.

Per usual, the entire segment was bristling with creativity and was not short on laughs. The skit begins with Colbert doing his monologue only to be distracted by a young crying girl in the front row who explains that she’s “too scared to vote.” After explaining the importance of voting (via song of course), Stewart emerged from the back and voiced an opposite position, namely that if someone doesn’t want to vote, then they shouldn’t be forced to vote.

Later in the clip, we’re even treated to a cameo from Javier Munoz of Hamilton. All in all, the clip does a great job of encapsulating the madness that has come to define the 2016 race for the White House. Notably, the sketch appears to hone in on voters who happen to be opposed to Trump but who aren’t exactly enthused by Hillary Clinton either.

To this point, the young girl at one point sings:

It’s not my fault that the system gave us two unsavory folks.

If they shared my values, I’d be first in line to vote.

But in civil oligarchy, we don’t have a real choice

How can I change a system,that won’t listen to my voice?

In a great response, Stewart, in full 1920s regalia and character says, “That is an unbelievably contrarian think piece. I want you to write for Slate.”