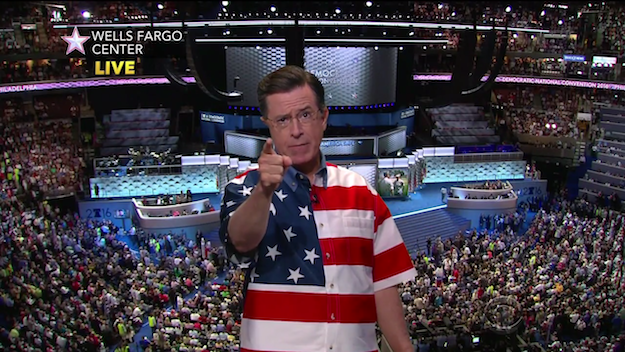 Something incredible happened last week during the Republican National Convention. No, it wasn’t when Ben Carson tried to convince America that Hillary Clinton was in league with Lucifer. It also wasn’t when “You Can’t Always Get What You Want” blasted through the Quicken Loans Arena following Trump’s acceptance speech, as an absurd number of balloons tumbled from the sky.

The most celebrated moment of last week was the return of “Stephen Colbert.”

MUST SEE: Marvel fans show us how ‘X-Men: Apocalypse’ really should have ended

I put “Stephen Colbert” in quotes because it wasn’t the CBS late night talk show host we saw last week — it was the character from The Colbert Report that we’d all assumed had been retired as soon as Stephen left Comedy Central.

As it turns out, Viacom (the company that owns Comedy Central) had also assumed the character was dead, and wasn’t too happy to see it resurrected on another network. Viacom’s lawyers got in touch with CBS’s lawyers to express their disapproval, so on Wednesday night, Stephen finally retired “Stephen Colbert.”

You can meet the new “Stephen Colbert” in the segment below, which also features a familiar Comedy Central segment with a slightly different name: