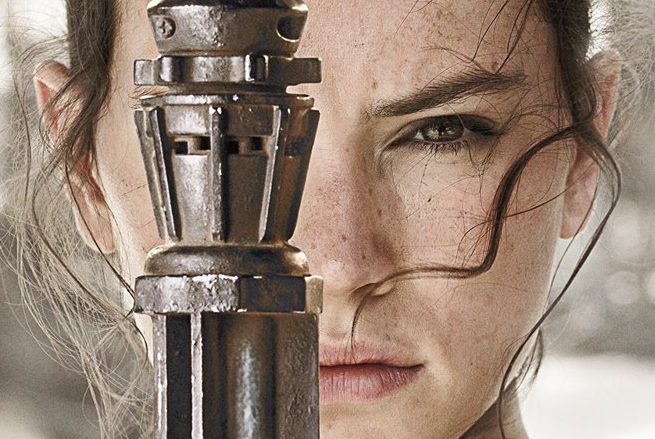 There’s about a year and a half of waiting left for Star Wars fans looking forward to Episode VIII. There’s not even a first trailer available for the upcoming movie, or a teaser for that first trailer. But until then we’ve got alleged script leaks to keep us entertained, and a new report seems to reveal who Rey is.

As ComicBookMovie reports, a leakster identified as Stormtrooper Larry, who has previously leaked pictures from the production set, said that part of the script for Episode VIII leaked online. The picture below contains a page of dialogue between Luke, Rey and Yoda during a vision that explains the history of the Jedi Order.

Luke tells Rey that she’s got a choice to make, and if she is to make it, then she deserves to know the truth.

Together with Yoda, they embark on a vision that shows Rey the past. Rey finds out that there were two young children exploring a planet with their parents. “The boy noticed that he had greater strength and intuition when he was closer to the tree,” the allegedly leaked script reads. “The girl noticed it gave him focus, but equally anger.”

“Over the next few years, they kept returning to the tree and hiding their secrets from their parents. They found they could control simple objects around them, and over time gained greater experience of the Fight,” the script goes on – this is likely what Luke and Yoda would tell Rey.

Then an argument ensued, and the boy killed the girl. Riddled with guilt, he noticed he could still feel her. “He touched the tree, he was transformed,” they tell Rey. “Filled with anger and rage at being brought to the planet he killed his parents and left the planet.”

That’s when things get interesting, as we all find out that the girl found out she was one with the tree, and so she touched the tree, and she was transformed too. Witnesses saw everything, and so the Jedi Order was born.

The girl explained to other Jedi how the Force can be used for both good and evil, and she then told them she will return one day, and she will be either a boy or a girl. Whatever the case, they should seek her and train her.

The Jedi Order apparently spent millennia looking for The One, training millions of children to use the Force. None of them turned out to be the One, not even Darth Vader. The order was deceived, and Darth Vader killed almost all Jedi in the Clone Wars.

Following this vision, Luke and Yoda show her who her parents are, and Luke isn’t her father. Apparently, she was identified by someone as strong with the Force and should have reached a certain destination to commence her training. However, she never reached that destination, “and the rest you know,” they tell her.

Rey realizes that she felt strong with the Force when surrounded by trees, and says she feels pain and death. It’s not clear what the Rey has to choose, but she has until sunset to make up her mind.

Luke might be living on the planet where it all began, Ach-To. Previous leaks showed a massive tree on the Act-To set before, lining up with this leaked screenplay page, seen in the image above.